Women and the economy

Economic disempowerment is just one of the many inequalities women face around the world. Addressing it will boost many of the Global Goals 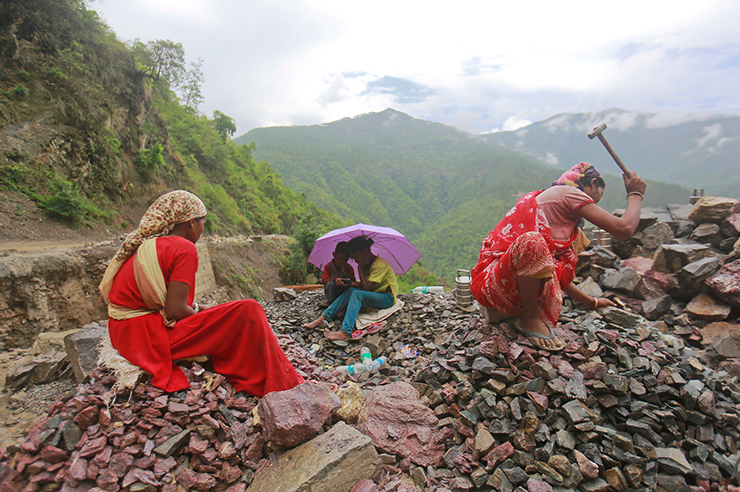 Woman repair storm-damaged roads while their children look on in the Himalayan state of Uttarakhand, India. In addition to lower participation in the labour market, women are more likely to be in part-time and low-paid jobs, and paid less than their male counterparts. © Danish Siddiqui/Reuters

Women and the economy

Economic disempowerment is just one of the many inequalities women face around the world. Addressing it will boost many of the Global Goals

The relatively brief period since the adoption of the UN Sustainable Development Goals (SDGs) in September 2015 has been extremely significant for the advancement of women’s rights. Gender equality and women’s empowerment – SDG 5 – is now a major issue on the global economic agenda. It features on the whole spectrum of global economic governance, from the UN to the International Monetary Fund and the World Bank. The issue has also influenced multilateral forums such as the G20 and G7, which, since 2015, have recognised the need to promote gender equality, and have committed to reduce the gender gap in workforce participation.

Focusing on empowering women and eliminating gender disparities is critical for achieving the SDGs and making the world a better and more prosperous place for all. Indeed, it contributes to the independence of many women and girls, their educational attainment, health, community engagement and security, and reduces their risk of being victims of violence.

Yet, despite significant improvements in the economic empowerment of many women, there are still more women than men in poverty in both developing and developed countries. According to the International Labour Organization, women are paid less than men and work longer hours (as they take care of family members). Often, they are excluded from the labour market; do not have access to finance; and are denied property rights. Furthermore, many women are still prevented from taking part in economic decision-making within their own household, and their participation in public life remains patchy.

Gender equality is a global issue that affects rich and poor countries. Overall, about 1.27 billion women are in paid employment, compared with two billion men. Or, one in two women aged 15 and over are in paid work, compared with about three in four men. Women are more likely than men not to be remunerated for their work: they undertake about three times more unpaid work than men. And even when they are paid, they earn less than men. This is either because they are in part-time jobs – often because of family commitments – or because they are employed in low-paid jobs, in industries such as personal care, hospitality and retail. Or it may be because of sheer pay discrimination – being paid less than men for doing the same job with the same hours. Additionally, women often experience poor working conditions and constraints in career progression.

In both developed and developing countries, women’s participation in the labour market is consistently lower than that of men. In 2016, in the OECD countries, on average 64 per cent of women aged 15 to 64 were working or actively looking for work. This compares with 80 per cent of men.

The exclusion of women from the labour market – and discrimination towards women in that market – are the main causes of poverty, especially for older women. Again, we see this happening in both advanced and developing economies, even where the welfare state in the former tends to contain cases of extreme poverty. Within the EU, for example, the share of women who were poor in 2015 was 1.4 percentage points higher than the share of men.

Action is needed
The turning point towards a gender-sensitive multilateral economic agenda has been the recognition that investing in women’s and girls’ economic empowerment is not only a fundamental human right: it is also smart economics.

Women in poverty often lack access to healthcare, education and skills training, basic infrastructure and transport, and childcare. They tend to have malnourished children, poor health, and be exposed to sexual harassment and violence. Bringing more women into the labour market, with decent employment conditions and no pay discrimination, will lead to less poverty (SDG 1), less hunger (SDG 2) and better health and wellbeing (SDG 3).

Active policies to promote gender inclusiveness are therefore critical to building more robust, sustainable, resilient and inclusive economies around the world. If women – who account for half the world’s working-age population – do not achieve their full economic potential, the global economy will suffer. According to a report published by McKinsey in 2015, increasing female participation in the labour market to full parity with men could add about $28 trillion, or 26 per cent, to global GDP by 2025.

In developed countries, banking group Citi estimates that measures to narrow the gender gap would add approximately six per cent to GDP over 10 to 20 years (all other things being equal). It would also help to address the demographic challenge faced by many advanced economies and developing countries, namely the rapidly increasing share of elderly people. Bringing more women to the formal labour market – increasing their average hours worked and average labour productivity – will make a significant contribution to economic activity and to supporting ageing populations.

There are concrete policy actions that individual UN Member States, as well as forums such as the G20 and G7, can embrace to achieve gender equality and empower all women and girls. For instance, to improve female participation in the labour market, countries should implement tax incentives and other measures to promote investments in social infrastructure. Other interventions should include policies to support work–life balance, and initiatives to foster women’s leadership in business and in politics.

Women’s economic empowerment is both a human right and human development concern. But today, gender inequalities remain too many, too persistent and too entrenched, especially in areas such as political representation. The pace of progress has been far too slow. We need concrete action now.