Trade can help countries to meet the new Sustainable Development Goals. But if trade is to enable the kind of sustainable development that leaves no one behind, the right conditions  must first be put in place 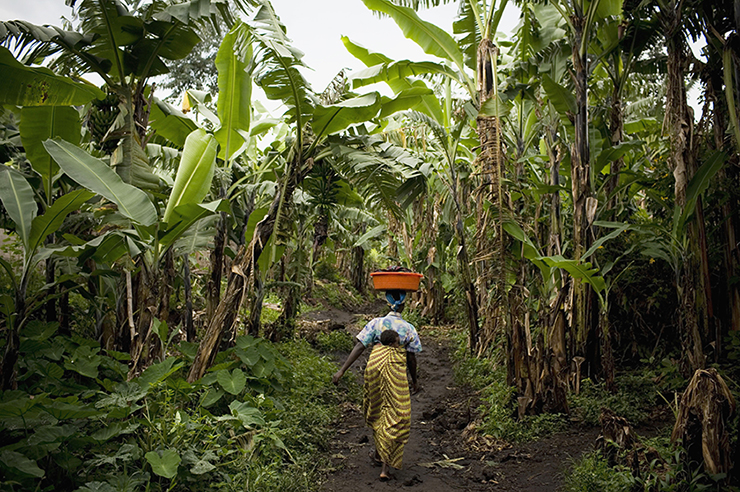 A banana plantation near Rangira, Democratic Republic of the Congo. LDCs have duty-free and quota-free market access to the EU. Multilateral rule-making should aim to extend this type of access to other key markets, including South-South  © Reuters/Siegfried Modola

Trade can help countries to meet the new Sustainable Development Goals. But if trade is to enable the kind of sustainable development that leaves no one behind, the right conditions  must first be put in place

Economists often urge countries to integrate into the global trading system as a way of reallocating capital and labour towards sectors with a comparative advantage. But the benefits of trade go beyond that. Trade can contribute to higher levels of investment, which can enhance production, help upgrade technology and boost productivity. This is important for sustained development.

Increasing market size through exports not only generates economies of scale, making firms more productive, but also triggers investment that expands the ability of a country to make, grow and sell things. Export earnings can also finance imports of cheaper, better and more varied machinery. This brings with it the more advanced technology needed to transform an economy towards higher levels of added value to goods and services.

Achieving this beneficial interaction between trade and investment catalyses the structural transformation of economies, creates jobs and develops skills in direct support of Sustainable Development Goals (SDGs) 8 (“promoting decent work and economic growth”), 9 (“building resilient infrastructure, promoting inclusive and sustainable industrialisation and fostering innovation”) and 10 (“reducing inequality within and among countries”). In addition, a universal, rules-based, open, non-discriminatory and equitable multilateral trading regime, which provides the institutional framework for sustained global trade, is chief among the global partnerships for sustainable development whose revitalisation is called for by Goal 17.

But while there is general agreement on the pivotal role of the trade-investment nexus in transforming economies and supporting inclusive prosperity, this nexus can play its role only under the right conditions. The extent to which such conditions exist has proven to be uneven across economies and over time. 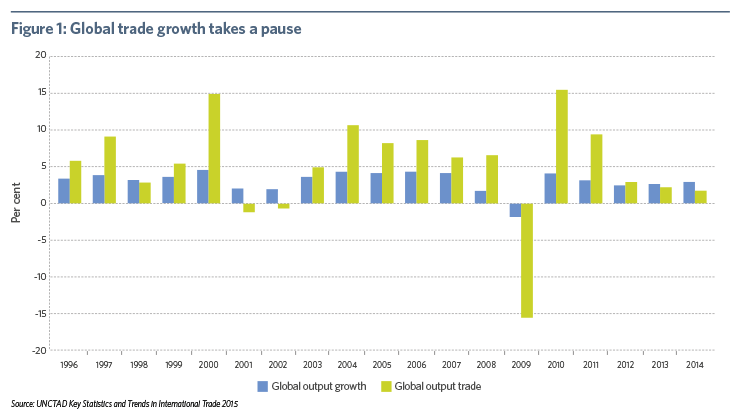 Securing conducive conditions
The successful use of trade as an enabler of sustainable development that leaves no one behind requires a conducive global economic environment. Recent trends in global trade have exacerbated the challenge of significantly increasing developing-country exports, in particular with a view to doubling the share of the 48 least-developed countries (LDCs) in global exports by 2020, as envisaged by SDG 17. The steep decline in commodity prices makes it difficult to maintain the buoyancy of commodity export earnings for the LDCs – earnings which contributed to an increase in their share in global exports from 0.6 per cent in 2000 to 1.1 per cent in 2014.

Globally, world trade dynamics have changed since the global recession of 2008-9. Analysis by UNCTAD shows that, after a strong rebound in 2010 and 2011, global trade growth has been anaemic and lower than already sluggish global output growth (see Figure 1). The continued fragility of economic recovery in developed countries is darkening the outlook for developing countries’ export opportunities.

Governments in developed countries have a number of policy options open to them to reverse slumping corporate investment (this is important because corporate investment drives growth and supports global trade). Chief among them are fiscal expansion that boosts public investment in infrastructure, tax reform that directs excess corporate savings into capital investment, and incomes policies that raise household consumption and further boost corporate investment and international trade.

Navigating shifting global production
A second important condition for putting trade to work for development is a solid understanding of what kind of trade countries should concentrate on. It is increasingly rare that goods and services are produced in an integrated production process, in one location and by one entity. Rather, the emergence of regional and global ‘value chains’ recasts domestic activities as part of cross-border production processes and emphasises trade in tasks. Evidence of this is seen in the changing share of domestic value added embodied in exports. These value chains have enabled a number of developing countries, notably in East and South-East Asia, to transform their economies and generate income and employment opportunities for their people.

However, accessing value chains and, more importantly, climbing the value-addition chain, is neither an automatic nor an easy process. Entering value chains can be supported by combining trade facilitation measures, which reduce the cost and time required to access external markets, with investment facilitation measures, such as creating a conducive business environment through streamlined registration and licensing procedures.

But developing countries at an early stage of industrialisation may become locked into low-value-added assembly activities, such as assembling products, due to stiff competition from other suppliers to keep labour costs low. Tight control over intellectual property and expensive branding strategies of the lead firm may also block them from moving up the value chain.

Problems in accessing and climbing value chains have drawn attention to the expanding variety of bilateral and regional trade agreements and international investment agreements (IIAs). These agreements often govern production arrangements in value chains and are intended to facilitate the inflow of foreign direct investment (FDI).

The empirical evidence on IIAs’ effectiveness in stimulating FDI, however, is ambiguous. Some of them contain more stringent, or additional, provisions than those covered by the multilateral trading regime. The lack of transparency and coherence characterising the tribunals established to adjudicate disputes arising from these agreements, and their perceived pro-investor bias, further underlines the pressing need for systemic reform of the global IIA regime. Various options are available, ranging from safeguarding the right to regulate in the public interest, and creating a centralised permanent investment tribunal, to inviting countries to define their own road map for IIA reform.

Strengthening trade policy coherence
A third condition for igniting the potential of trade to contribute to prosperity for all requires mobilising all available policy instruments. For example, UNCTAD’s work on the impact of trade on gender equality points to contradictory effects. Export expansion may enable women to get wage employment in the formal sector, but often at lower salaries and with limited opportunities for skill development compared to their male colleagues. To address such issues, UNCTAD recommends, among other things, including economic empowerment in the implementation of SDG 5 on achieving gender equality and empowering women and girls.

In today’s international trade environment, non-tariff measures are becoming increasingly important and – against the trend of falling tariffs – the trade restrictiveness of non-tariff measures is on the rise. While these measures pose significantly higher barriers to exporters than tariffs in all sectors, they particularly affect agriculture (see Figure 2) – a sector  of specific importance to exports from the LDCs.

Particularly worrying is that domestic measures taken by individual countries toward implementing the SDGs (such as technical barriers to trade designed to protect the environment) may further raise the number of non-tariff measures. Only working together can ensure that one country’s efforts to achieve its SDGs will not undermine those of others.

Developed countries are trying to limit the so-called ‘tax optimisation’ strategies used by corporations that declare profits in tax havens. Should we not apply the same principles to investment in developing countries and make corporations pay taxes where they undertake their profitable activities? Last year, investment-related tax evasion cost developing countries some $100 billion– about twice the amount of FDI that went to Africa in the same period.

This means that stopping tax optimisation will not just bolster the fiscal accounts of developed countries and allow them to make the public investment needed to accelerate economic recovery and global trade growth. It will also add to the public part of the finance needed for the investment push that is crucial for developing countries to attain the SDGs. 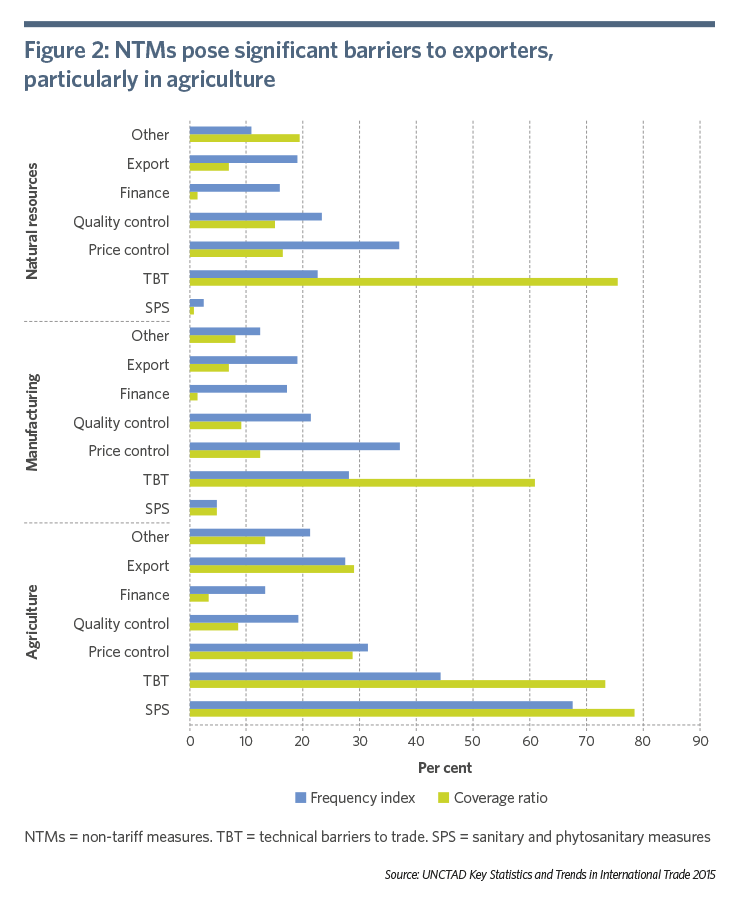 Creativity and pragmatism
A fourth important way in which trade can serve the SDGs requires the international community to take creative and pragmatic actions that put the trade rules to work  for development. Starting with the Uruguay Round from 1986 to 1994, there was a strong assumption that the norm-setting of trade rules by the World Trade Organization (WTO) would lead to better development outcomes. However, the development ambitions encompassed in the Doha Development Agenda, which began in 2001, have not met those optimistic expectations, though some hurdles were overcome at the WTO’s Ministerial Conference in December 2015.

So-called ‘plurilateral’ (multi-party) and regional arrangements, such as the Trans-Pacific Partnership, generally boost development objectives less than multilateral agreements, particularly since they do not do much to spur global trade. They are less about tariffs and market access issues, and more about regulatory convergence and standards that reshape global value chains. Their norm-setting activities are non-inclusive and distort international competitiveness by providing different trading partners with different trading conditions. This has repercussions, particularly for the many lower-income countries that see their preferential margins in international markets erode.

Multilateral rule-making could address preference erosion, among other things, by broadening duty-free and quota-free market access to all merchandise exports from LDCs in key markets, including in South–South trade, and implementing the services waiver, decided at the WTO’s Ministerial Conference. This would enhance LDCs’ services supply capacities.

Appropriate policies can harness the trade-investment nexus for the SDGs. Trade and investment policies must be interlinked and part of a coherent broader set of policies. Only a comprehensive perspective can provide the coherent approach that we need to make progress toward the universal and transformative Agenda 2030 behind the SDGs.

We invite our development partners to engage in a dialogue on all development issues. To help integrate them in a holistic manner across sectors and dimensions of sustainable development, we look to UNCTAD 14, our 14th quadrennial conference to be held in Nairobi, Kenya, in July 2016, to affirm a strong global partnership and offer the right policy framework for achieving prosperity for all.