Does our global system of rules help or hinder global progress, as measured by the implementation of the SDGs? 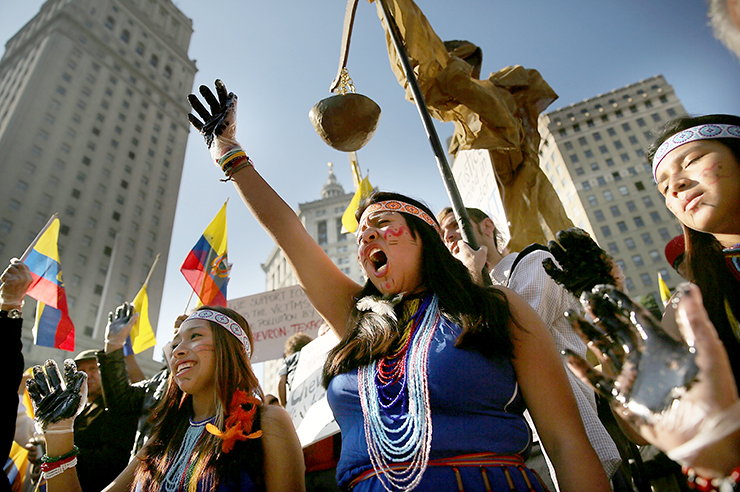 Demonstrators outside a courthouse in New York, protesting against Chevron’s attempt to overturn an $18 billion judgment made against it in Ecuador. The case revolved around who bore responsibility for cleaning up contamination created by an oil field in northeastern Ecuador. The long-running case was adopted by many as a symbol of how rules supported exploitation by rich corporations. © Spencer Platt/Getty Images

Does our global system of rules help or hinder global progress, as measured by the implementation of the SDGs?

The problem was neatly summed up by UN Secretary-General António Guterres in a speech at a UNA-UK event in London in May 2017: “Many people doubt that multilateralism is the solution for the global problems at this time. It is clear that globalisation has had a very positive impact on the wellbeing of the overwhelming majority of population of the world.

“But at the same time it is also true that globalisation and technological progress have contributed to increased inequality.People feel abandoned and feel not only that globalisation has worked against them, but that the political establishment – international organisations – have not been able to address their plight or solve their problems.”

The idea that our global system of rules and standards is a good thing, that it helps make the world a better place, used to be widely accepted by governments the world over. There has always been an anti-globalisation movement. Parts of that movement have always taken aim at the global system, and since the Berlin demonstrations of 1988 that movement has grown in strength. But the movement was, almost by definition, anti-establishment. This is no longer the case.

True, some governments – the UK in particular – still express public support for the rules-based global system. However, at times, as UNA-UK’s ‘Global Britain Scorecard’ has shown, the support goes no further than rhetoric. In some cases (such as arms exports to Saudi Arabia in contravention of the spirit of the Arms Trade Treaty, or rhetoric around human rights) the UK’s actions have even damaged the system.

But anti-internationalist sentiment, raised high by the tide of populist nationalism, means that this approach is no longer universal.

The United States under President Trump has taken American exceptionalism to new heights. Populist strongmen in India, the Philippines, Turkey and Hungary are more willing than ever to confront and refute global standards and norms. The governments of Sri Lanka and Myanmar have demonstrated that one can commit atrocity crimes and yet not become a pariah state. China has demonstrated ambivalence.

In Russia too the situation is complicated. Russia needs the international system: in particular, it needs its privileged position as a veto-wielding Security Council member to demonstrate to its allies and constituents that it is still a global power – at a time when there is greater cause to doubt that.

And so, as the Secretary-General said, our global system is under attack. As he went on to say, if it is to survive then its friends and allies must robustly defend it. But for such a defence to be effective, there is also a need to listen to those who are losing out under the current global system. We need to understand their concerns, and to reform the system to make it work for them.

Lawful good, chaotic evil?
Let’s start by asking a question: whose interests does our global system of rules serve? To what extent do rules protect the weak and to what extent do they protect  the strong?

While the question might seem simple, the answer is not. It is one historians and philosophers have struggled with for decades. There is no consensus, and that alone should suggest that the answer is somewhere in the middle: not favouring exclusively the weak or the strong, but a bit of both.

On the one hand, one of the primary effects of rules is to limit change and so maintain stability. This is in the interests of the strong. The status quo favours certain groups and so it is in the interest of those groups to maintain that status quo. Rules, standards and norms are helpful in doing so as they limit dynamic forces.

This is why so many of the left behind have turned against the very idea of a global system. It limits the change that would be needed to “solve their problems” in the Secretary-General’s phrase.

On the other hand, without rules what remains is too often the idea of ‘might makes right’. In a world without limits there are no limits on the ability of the strong to oppress the weak.

As we have seen most explicitly in the development of global human rights standards, rules – and a global system to back them up – can protect the weak against the strong. Indeed, in that sense they’re the only thing that can.

This isn’t quite a dichotomy. What we see is that rules quite often protect strong institutions and weak people. Our global system is self-supporting, and doesn’t willingly or easily give up power to new forces or institutions. Rules prevent and limit their emergence. But equally, rules provide a mechanism for individual protection and restitution. Rules are inflexible, and so they can limit power and protect those without it.

An agenda for all
For most, however, the question is not if a global system of rules has the ability to serve their interests but which rules would do so. A global system that better addressed the needs of those Guterres identified as the losers of globalisation would not have to answer so many existential questions.

The Sustainable Development Goals (SDGs) have the ability to provide the solution here. They outline an agenda for the kind of world we want come 2030, and in many ways they answer the Secretary-General’s challenge.

SDG 10 (reduced inequalities) is specifically about reducing the gap between the haves and the have-nots, while SDG 8 (decent work and economic growth), SDG 9 (industry, innovation and infrastructure) and SDG 11 (sustainable cities and communities) could have transformational effects in what Guterres describes as the “rust belts of the world”.

The question that remains is: can and should the losers of globalisation trust the current system to deliver the SDGs? Let’s look at the question in two parts: the UN itself and the partners the UN works with.

The UN
The UN was not founded by the have-nots. Coming out of the Second World War and the ‘united nations’ of forces opposed to Germany, the organisation and its charter were largely the products of the civil servants of major powers and their allies.

However, the UN almost immediately demonstrated itself to be a natural home for surprisingly subaltern forces. The General Assembly’s advocacy on racism and apartheid, and on decolonisation, would prove a thorn in the side of the major powers for at least the next half century.

In part this is a consequence of the UN’s nature. The geopolitical situation of 1945 was hardwired into parts of the UN’s architecture, most fundamentally in the form of the five permanent seats on the UN Security Council. Yet the very fact that the UN provides a forum where states can meet and talk on terms closer to equality is inevitably going to have the effect of levelling the playing field between states.

The creation of a UN bureaucracy has also amplified the voices of the weak and limited the powers of the strong. The bureaucracy maintains standards and fights against selectivity. It has also evolved its own personality, due in no small part to the kind of people it has attracted: internationalists, idealists, misfits.

This should suggest that the UN is more than the servant of globalisation’s winners, and is capable of delivering for the losers and have-nots. Whether it will or not will most likely come down to whether it is allowed to by those it works with – and for.

The UN’s partners
If states, the private sector and civil society value the rules-based international system, then they must allow it to succeed for all. The conventional argument is that these various players should each value the system due to self-interest. Our system of rules keeps the peace, improves communication, and ensures a level of reliability and predictability. This all has benefits for trade and for our global prosperity.

Unfortunately, it is not so simple. There is money to be made and power to be gained from war and chaos. While very few people would truly benefit from a complete collapse of the global order, flaunting the rules does pay for some. UK companies receive more than a billion pounds a year from arms sales to Saudi Arabia. For too many actors, viewed purely through the lens of game theory, there is more to be gained from chaotic equilibrium than from order.

But that is not a strategy for the long term. It is no longer possible for states or companies to cherry-pick the parts of the global system they like and ignore the rest. The Secretary-General’s point was that our global order has become too fragile to allow that. Under pressure like never before it cannot bear the burden of many more challenges to global standards or many more populations without a stake in the system.

In our interconnected world, our every action has knock-on effects for other sectors, industries, stakeholders and people. It was for this reason that the SDGs were designed to cover such a broad and interlocking agenda. Virtually all of Agenda 2030 needs to succeed if any of it is to succeed. And it needs to work for virtually all if it is to work for anyone.