What to expect from the new champions

Where action by national governments on SDG implementation is lacking, can others fill the void? 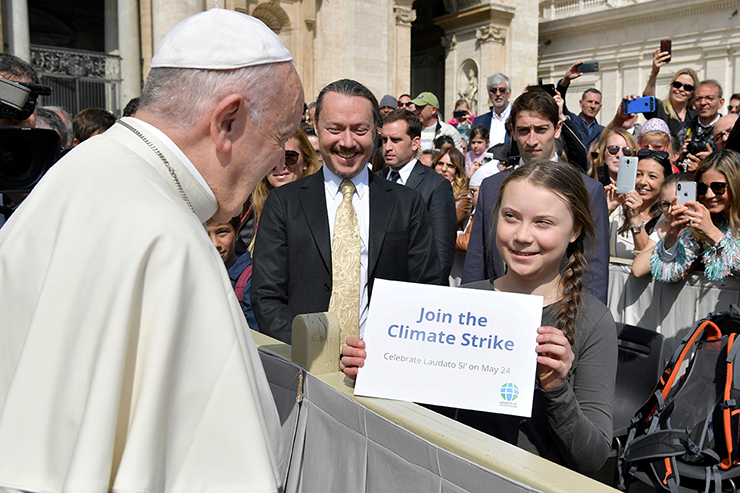 As many national leaders pull back from global public goods, some surprising ‘new champions’ have emerged. Climate activist and Swedish teenager Greta Thunberg meets Pope Francis at the Vatican.  © Vatican Media/Handout via Reuters

What to expect from the new champions

Where action by national governments on SDG implementation is lacking, can others fill the void?

Agenda 2030 is in trouble. The rare political consensus that led to the adoption of the Sustainable Development Goals (SDGs) four years ago has become fractured. In many countries, even when the state has the capacity to implement the Goals, political will has fallen behind the commitments made in 2015.

In other contexts, nationalist leaderships openly attack multilateralism – including the United Nations – as irrelevant, or even worse as a threat to national sovereignty. Across a wide spectrum of countries, protection systems are being weakened rather than reinforced, levels of wellbeing are falling, and inequalities are rising.

As economist Diane Elson has noted, these trends indicate that in addition to the challenge of leaving no one behind by reaching the most vulnerable populations, Agenda 2030 faces the additional challenge of preventing governments from “pushing many even further behind”.

This dual challenge requires a broad cross-sectoral engagement. Indeed, although Member States were the protagonists during the SDG negotiations, the process raised expectations of engagement by non-state actors. In addition to the intergovernmental sessions that shaped the goals were global consultations, hearings, high-level panels and side events that underscored the need to incorporate non-state actors. Likewise, the Addis Ababa Action Agenda acknowledged the role of the “diverse private sector” and of “incentivising changes in financing as well as consumption and production patterns to support sustainable development”.

Alongside this attention to non-state actors was a surging belief that subnational government, sometimes acting at odds with nationalist federal governments, could compensate for the failings of Member State commitments. The international community cast a wide net seeking out ‘new champions’ for the 2030 Agenda.

The attention granted to these ‘non-traditional’ actors was, understandably, a response to the mistakes committed during the period of the Millennium Development Goals (MDGs). The MDGs’ agenda remained excessively state-centric and largely failed to localise its achievements.

From abstract to reality
By underscoring the role of non-state actors, the 2030 Agenda recognises that states’ capacity to reach targets is limited. It also acknowledges that civil society and the private sector frequently play a role in filling those gaps, and that they can bring unique capabilities to the table. Often non-state actors are better able to translate the abstract goals into concrete reality for people on the ground, whether through innovative service delivery or more sustainable consumption.

Likewise, subnational governments were largely left out of the MDG agenda, meaning that the goals often remained abstract planning instruments rather than translated into concrete reality at a local level. One of the ‘new ideas’ behind Agenda 2030 was precisely that by tapping into these previously overlooked pools of knowledge, capacity and resources, the international community could make SDG implementation both more effective and more credible.

Driving SDG implementation
Since 2015, the pressure for these new champions to help drive SDG implementation has only increased. The expectations are, in part, a result of the visibility of successful cases. Where national leadership is lacking or unwilling, a broad array of non-state actors and subnational governments has stepped up. This has led to a wave of optimism that some of the world’s most complex challenges can be met through a combination of grassroots ingenuity, corporate social responsibility and decentralised government.

Non-state actors have also become relevant actors in key UN processes related to Agenda 2030. For example, in some countries, non-governmental organisations (NGOs) have assumed a vital role in the monitoring of SDG implementation, including by submitting inputs into the voluntary national reviews.

These success stories have been amplified by instances in which non-state actors and subnational governments seem to proactively ‘fill the shoes’ of the federal state. These stakeholders often possess or can tap into evidence-based knowledge of the local context and identify real needs and demands.

In many parts of the world, NGOs have greater capillary reach than the federal state into the targeted populations and can better identify the needs of the most vulnerable groups. Think tanks, research centres and universities are also vast repositories of knowledge about what works and what does not in areas as varied as social services, infrastructure and climate action.

NGOs sometimes promote grassroots models of sustainable development that are more cost-effective and inclusive than their top-down, government-designed counterparts. They can also work effectively through networks that cut across the silos of government, in ways that are closely aligned with the cross-cutting nature of the SDGs. In a number of countries, civil society has come together through coalitions aimed at promoting effective SDG implementation.

Innovative funding
The private sector, too, can bring its own added value to SDG implementation. Not only are companies and corporations themselves an important source of funding, they also offer innovative funding instruments, including via social impact investments.

The private sector encompasses an entire range of services and products, from financing tools to consumer goods. These must be taken into account in strategies for SDG implementation, and some companies have heeded the call to make their offerings more sustainable.

Innovative technologies that are useful in SDG implementation, from communications to transport, are often the result of private-sector initiatives. At the intersection of civil society and the private sector, philanthropic organisations have dispersed billions of dollars to address the social issues of the agenda and are sometimes willing to make ‘big bets’ in tackling particularly tricky issues in health, education and other areas. They, too, are necessary actors given the $2.5 trillion funding gap in achieving the SDGs.

Localising the SDGs
Subnational governments have also become the object of unprecedented high expectations. Provinces and cities are much better positioned to localise the SDGs than federal bodies. But assumptions are sometimes made that they can also compensate for failing global regimes.

Perhaps the most salient example of the resulting optimism is the role expected of such actors in compensating for political reversals in the Paris Agreement on climate action, in particular President Donald Trump’s announcement that the United States would withdraw from the accord. In the wake of this decision, city and provincial governments have been praised for picking up where states have slacked off.

In June 2017, the New York Times editorial board gleefully proclaimed in its opinion pages that subnational governments in the US and elsewhere were compensating for “Mr. Trump’s Climate Stupidity” – a claim relevant not only to the Paris Agreement but also to SDG 13, on climate action.

Managing expectations
While there is reason for optimism that these new champions can catalyse action around the SDGs and provide resources for their implementation, the expectations are sometimes overblown.

First, the assumption that civil society, the private sector and subnational government can solve the world’s increasingly complex problems is unrealistic. There are constraints to what these actors can accomplish, especially in contexts where state backing is inadequate or, even worse, oppositional.

Civil-society organisations frequently lack sufficient resources even for institutional survival, let alone for scaling-up sustainability efforts. Both civil society and the private sector can fall prey to the silo effect, especially if they have a long track record of specialised action and a poor one in cross-sectoral coordination.

Excessive reliance on the private sector also carries its own set of risks, some of them stemming from the conflicts between a profit-based logic and that of sustainable development.

While some corporations have pledged hefty commitments to Agenda 2030, any talk of ‘unlocking’ trillions in private financing overstates the impact of these resources. Money is not a panacea for poverty and exclusion. Sometimes SDG implementation depends far more on policy transformation than on a surge in investments.

This is particularly true because private-sector actors have overwhelming incentives to favour short-term gains over long-term strategies, which are at the heart of an effective strategy for SDG implementation. This tension is also present in public–private partnerships, which are often held up as combining the best of both worlds. Yet they can also replicate some of the tensions in the private-sector approach to investments.

More broadly, shifting central responsibility for planning, coordination, resources and implementation away from the state to non-state actors makes those processes more vulnerable, especially where state budgets are being slashed at the expense of the most vulnerable populations. In many parts of the world, including much of Latin America and areas of Africa, the ongoing weakening of social protection systems has left non-state actors and subnational governments alike scrambling for basic resources. Against this backdrop of social services backsliding, efforts by civil society and the private sector are ancillary at best.

The SDG agenda is moving more slowly than it should, but it remains a powerful global narrative and a much-needed framework. As more populist and nationalist leaderships emerge, Member States pull back from global public goods. Within this scenario, the role of the new champions in implementing the 2030 Agenda is vital, but expectations should be managed. Their successes, where they occur, should be celebrated and promoted, but these achievements should not be spun into justifications for the minimal state. Allowing this to happen would be worse than failing to ‘leave no one behind’ – it would exacerbate the trend, already too common, of pushing the most vulnerable even further behind.