How can we ensure that towns and cities support ever-growing urban populations where no one is forced to live in slum conditions? 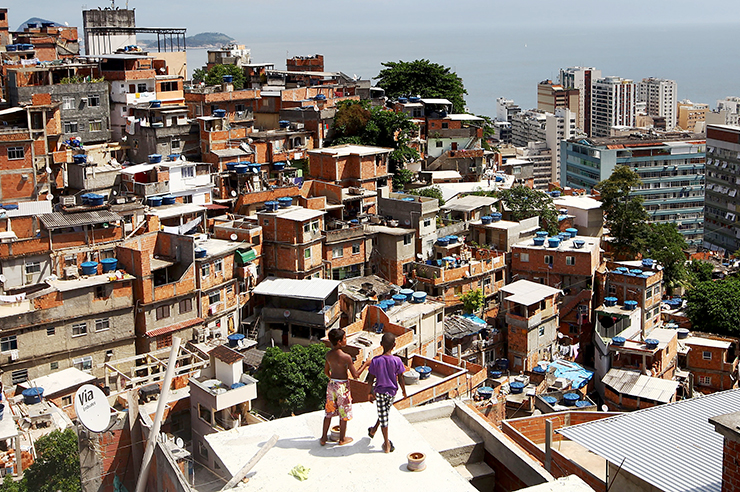 Cantagalo favela in Rio de Janeiro, Brazil, one of the ‘pacified’ favelas. Around 1.7 million Rio residents live  in favelas, many of which are controlled by drug gangs. © Mario Tama/Getty Images

How can we ensure that towns and cities support ever-growing urban populations where no one is forced to live in slum conditions?

We are just past the midway point in an unprecedented 100-year process of urban demographic transformation.

It began in 1950, when less than one third of the world population lived in urban places. Fifty-seven years later, in 2007, for the first time in human history, the urban population surpassed the rural. By 2050, the UN predicts that “the world will be one third rural (34 per cent) and two thirds urban (66 per cent), roughly the reverse of the global rural–urban population distribution of the mid-twentieth century”.1

It will be a long while before the full impacts of this population reversal are fully felt and understood. In immediate terms, however, it is worth considering that by the time we reach that mid-century mark, the world’s urban population will more or less equal the world’s total population today – around seven billion people.

This wave of urbanisation will greatly influence our ability to achieve the 17 Sustainable Development Goals (SDGs) – not least Goal 11, the ‘urban goal’, which calls for making “cities inclusive, safe, resilient and sustainable”.2

This in turn explicitly requires “ensuring access to safe and affordable housing, and upgrading slum settlements”.3 Put slightly differently, meeting the SDGs requires that we do not merely limit the numbers of people living in slums, but that we act to reduce the number.

At this moment, between one quarter and one third of all urban residents live in slums (between 900 million and one billion people). So if we aspire, as we should, to global urbanisation without slums, a main order of immediate business is to reverse the present trend towards increases in slum living. It is an achievable end and should be a priority.

Why? Because if two thirds of the human race is going to be urban by mid-century, then environmentally efficient and socially equitable cities are the necessary condition for everything else. There is no guarantee cities can fulfil this role on their own. Too many contemporary cities are essentially environmental dumping grounds and hotbeds of social and political instability. We need to reset the balance between negative pushes and positive pulls in shaping the way our mid-century urbanisation will emerge.

The most rapidly growing cities are expanding via the immigration of peoples whose existing ways of life have been lost. Immediate causes are always too complex to parse, but the longer-term underlying drivers are clear: global economic change that undermines older industries, the pressures of climate on existing ways of life, and the ensuing political instability resulting from the first two.

Although these migrations have a primary impact that is local, they are nonetheless the result of global phenomena and thus have serious negative consequences that spread across the world. The most obvious contemporary impacts are the massive international population migrations that  are presently shaking up the political order in the high-income nations of Europe and the Americas.

Finding the positive
Addressing the creation of an urbanisation process without slums holds out the promise of providing a powerful brake on the forward motion of this instability. The often touted simple notion of stopping urbanisation in its tracks is always raised but remains an illusion. Urbanisation has been going forward for over 10,000 years. Our challenge is to make it a process of positive pulls instead of negative pushes.

Three big questions need to be addressed to meet this challenge:

The answer to the first question is unequivocally “yes”. We all know what vibrant cities without slums require. Examples abound in the world’s high-income countries. It is important to remember that 19th-century industrial cities such as London and New York overcame the same problems. The challenge today, albeit on a global scale, is surprisingly similar in terms of specific solutions: safe water, good sanitation, widespread access to power and transport infrastructure, well-built dwelling units and access to decent-paying employment.

The answer to the second question – can we afford to meet the need? – is also almost assuredly “yes”. From 2003 until 2005 I co-led the task force on slums for the Millennium Development Project, part of the UN-led effort at achieving the Millennium Development Goals, which preceded the SDGs.
Our report, A Home in the City, contained global cost estimates for slum upgrading and the costs of ensuring future urbanisation without slums.4 Our estimates came to an average cost of $670 per slum dweller for upgrading existing slums and $400 per person for avoiding future slums through planned development.

In other words, applying these numbers against present demographic data, I estimate that the cost of creating a process of global urbanisation without slums would be in the order of $1.3 trillion. Can the world afford that? It can. The estimated full costs of the US- and UK-led invasion of Iraq are currently running well over $2 trillion. Joseph Stiglitz and Linda Bilmes estimate the ultimate cost of the invasion will be more than $3 trillion.5 The cost of an urban world without slums is roughly half the cost of that one war to date. Thus, whether we invest in urbanisation without slums or not is a question of our values, not of our resources.

Reframing the dialogue
Which brings us to the hard question: do we have the necessary political will to act? At the present moment, no. Right now, the nations of the world are more inclined to address manifest symptoms like international mass migrations rather than root causes like stabilising the cities and nations whence these migration flows originate.

Our challenge is to reframe the global dialogue. What became clear from the time I spent visiting urban slums in Asia, Africa and Latin America is that there are a large number of innovative, potentially effective local solutions promoted by local people, NGOs and governments at different levels. But these social pilot projects rarely achieve sufficient operating scale to make a measurable difference.

We could do much to address the pessimism inherent in the current answer to the third question. How? By providing a better understanding of how much could be done with a comparatively small amount of resources to bring these effective efforts to sufficient scale. There is nothing like success to breed more success.