The SDGs recognise the importance of tackling corruption if their ambitious aims are to be realised. But with corruption a highly nuanced, persistent and pervasive problem, how can this be achieved? 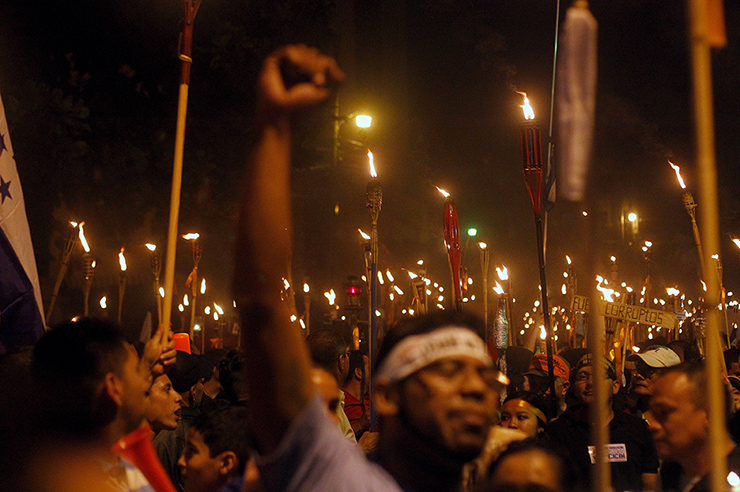 The SDGs recognise the importance of tackling corruption if their ambitious aims are to be realised. But with corruption a highly nuanced, persistent and pervasive problem, how can this be achieved?

That institutions matter for development is now incontrovertible. One of the core lessons from the Millennium Development Goals (MDGs) was that progress in achieving different goals across countries (and even within them) often hinges on the quality of governance structures and dynamics.1

While governance was a considerable blind spot of the MDG framework, institutions are now at the core of the newly agreed Sustainable Development Goals (SDGs) and their ambition to eliminate extreme poverty and foster more resilient states and societies over the next 15 years. Goal 16 commits all signatory countries to “build effective, accountable and inclusive institutions at all levels”.2

Corruption in particular is identified as a central concern. A number of targets call for promoting enhanced accountability and transparency, including by significantly reducing all forms of corruption. But if corruption is the problem in development that everybody loves to hate, this does not mean that we understand it any better or that we can combat it effectively. Corruption is not black and white, but rather 50 shades of grey. It is time for a grown up conversation that moves beyond over-simplified narratives about the causes and effects of corruption and the ways to fight it.3

What would a more nuanced approach look like? Here are eight key points (drawn from research undertaken by myself and other colleagues for a recent UK Department for International Development Evidence Paper on corruption4) that might help kick-start a more mature discussion.

1. Corruption is not a straightforward, technical problem
Corruption is a complex phenomenon that is rooted in a wide variety of economic, political, administrative, social and cultural factors and power relations. It results from a multiplicity of interactions between different actors (within the state as well as in the private sector and other organised civil society) and institutions (including both formal and informal rules of the game) at different levels, be it international, regional, national and/or subnational. Corruption is likely to thrive in conditions where accountability is weak, people have too much discretion, and the shared expectation is that others within a given community or society will be corrupt (so there is little to be gained by opting out of such behaviour). It is this collective and systemic – rather than simply individual – character of corruption that makes it so entrenched and difficult to address.5

2. Corruption can be particularly pernicious…
As suggested by demonstrations that have swept across countries ranging from Brazil to Egypt, Guatemala and Ukraine over the past decade, corruption deeply undermines legitimacy and trust in public institutions and shapes people’s perceptions of government performance and state effectiveness. Widespread revulsion against corruption can have dramatic consequences, both positive and less so. In cases like Brazil and Guatemala, for instance, it may be helping to rearticulate the linkages between state and society along more accountable and representative lines.6

In other instances, as in the fate of most Arab Spring countries, prospects for progressive transformation have not borne fruit. Perhaps the most perverse backlash against corruption can be seen in the rise of movements like the Taliban and ISIL, where every indication suggests that the ‘cure’ is far worse than any disease that could have been imagined.

Corruption also skews the distribution of public services. As a large body of evidence shows, it negatively affects service delivery, in terms of both quantity and quality.7 This can have a disproportionate impact on marginalised and vulnerable groups (be it in terms of gender, ethnicity, class, religion, geography, etc.) and lead to increased inequality.

3. …but it may not always be as bad as we think
The term ‘corruption’ covers a host of activities and situations, some of which are more detrimental than others. There is a fundamental difference, for instance, between police officers demanding payment to carry out their responsibility to protect citizens (especially when they haven’t been paid in months) and political leaders handing over lucrative monopoly rights to strategic allies in exchange for support – as has happened with many privatisation initiatives that have degenerated into ‘piratisation’ all over the developing world.

In addition, while existing evidence suggests that, at the micro level, corruption imposes costs in terms of both domestic investment and business productivity and performance, it has not been a determining factor in constraining macroeconomic growth. Different countries with highly variable levels of corruption have been equally able to sustain prolonged periods of economic growth (consider, for instance, Botswana, Brazil, Cambodia, China, Ethiopia, Indonesia, Mexico, Rwanda, South Africa and Vietnam).

Some of these same countries have also managed to make important progress in the fight against poverty. A key lesson emerging from the diversity of these experiences is that corruption (or, more precisely, corrupt rent-seeking) is not what has made the difference, but rather how such rents have been managed and distributed.8

Other factors that seem to matter from historical experience are: political settlements that can enhance a sense of national identity; internally coherent states that can develop essential coordination capacities and build needed confidence in the absence of concrete rules; committed political leadership; well-organised political parties (in both democratic systems and hegemonic party-states); and accountability mechanisms that move beyond supply and demand and focus on engagement among actors in state and society.9

4. The effects of corruption are far from black and white
As noted above, corruption can impact vulnerable and marginalised groups disproportionately. Higher levels of corruption are also linked to increased inequality. However, there are also indications that the isolated removal or elimination of corrupt practices might not solve the problem.

For instance, efforts to curtail corruption in low-income countries are likely to impede the functioning of the informal sector. This may be counterproductive given that the informal sector contains many of the poorest and most vulnerable members of society, and the reduction of ‘corrupt’ practices in largely informal economies may further exacerbate poverty.

The relationship between corruption, fragility and conflict is also illustrative in this respect. Given the negative effect that corruption has on legitimacy, corruption can in fact exacerbate conflict dynamics in fragile states by further undermining trust within and between actors in both state and society. On the other hand, evidence also shows that corruption can help to hold together fragile states. Access to the proceeds of corruption can be crucial in forming the political settlements necessary to end violent conflict.

Among other things, the promise of a share of (corruptly gained) rents or economic revenues can facilitate peace processes, encouraging spoilers to participate. By contrast, efforts that seek to transform corrupt regimes too quickly can lead to violence as entrenched political interests resist change.10 These examples show how important it is to move away, as Heather Marquette has suggested, from the common, unquestioning assumption that corruption is always the worst of all evils and that it can be wiped out without collateral damage.11

5. Democracy is not a silver bullet…
Since the 1990s, the developing world has experienced a growing tide of democratisation. These transitions generated great hopes that democratic reforms would improve governance and reduce corruption. In principle, regular elections, a system of checks and balances, and a society free to organise should provide important mechanisms and/or incentives for politicians to deliver and be held accountable for their actions. In practice, however, these assumed benefits of democracy do not emerge naturally.

In many countries undergoing democratisation, corruption has either increased or become more visible. This is particularly evident in electoral politics, where campaign corruption scandals are uncovered regularly. In some settings, organised crime has thoroughly infiltrated political systems (witness what is happening across regions like the Balkans and Latin America, with Mexico as a particularly tragic example12).

This suggests an urgent need for campaign finance reform, a better understanding of the influence of dirty money (in this respect, the emphasis that the SDG targets have placed on combating organised crime is particularly welcome) and greater caution in approaching corruption in democratising contexts.

6. …and neither are women
An influential 1999 World Bank study concluded that a higher percentage of women in government is associated with lower levels of corruption.13 However, subsequent evidence remains inconclusive. In situations of risk (including, for instance, the risk of stigmatisation or vulnerability to punishment based on gender discrimination), women are less prone to accept bribes than men. This suggests that women may be more risk-averse, rather than less inherently corrupt. Indeed, other research shows that women are as likely as men to engage in corruption once they gain increased exposure and access to the political system.14

Knowledge of contextual dynamics and social taboos are essential to understanding the propensity towards corruption among men and women – and it should not be assumed that incorporating a greater number of women in politics will be a magic bullet against corruption.

7. Formal rules are insufficient to address corruption
Various attempts to combat corruption across the developing world have fallen considerably short of expectations, often because they have been based on unrealistic (and often technical) blueprints, focused on changing formal rules. Yet, as we know, laws often look great on paper, but their implementation is another matter. Uganda is a great example of this paradox: at one point it had the best anti-corruption laws in the world (with a score of 99/100 in one league table), and yet it ranked 142nd out of 175 countries in the 2014 Transparency International Corruption Perceptions Index. And while there has been a veritable explosion of freedom of information laws – with Paraguay becoming the 100th country to enact one in 2014 – their implementation remains a pervasive challenge.

If we are to better understand what is likely to work in combating corruption and why, we must bring power and politics back into the centre of analysis and unearth the contextual dynamics at play. These include the underlying political arrangements or settlements; the nature and evolution of state-society relations; the kinds of interaction between formal and informal institutions; and embedded power structures and differentials among various groups both within and between state and society – to name just a few.

Anti-corruption measures need to be more strategic and tailored to specific contexts. They work better when integrated into wider efforts to promote institutional reform. Undoubtedly, those committed to fighting against corruption are increasingly aware that they need to develop a deeper understanding of the context (domestic, regional, international) and the factors driving corruption, especially in terms of political processes and the frameworks of incentives within which different actors operate. But the default position is still towards technical approaches that shy away from the deeper political realities, power dynamics and social structures that perpetrate corruption.

8. It’s time for a more realistic approach (or, we need to grow up)
Corruption is a serious problem – and the answers are not straightforward. The SDGs offer an ambitious and compelling framework for transformation that firmly recognises the importance of institutions to foster more resilient states and societies. But the agenda remains profoundly aspirational, and squaring the circle between normative ideals and how change actually happens is the fundamental challenge of development over the next 15 years and beyond.15

If anti-corruption efforts are to be effective, we need to move beyond black and white platitudes and recognise corruption, its causes and effects in the full complexity of their shading. Dogmatic approaches to the fight against corruption that fail to understand that change is messy, and that neglect underlying structures and dynamics, may ultimately cause more harm than good.