A UN fit for purpose?

Will the UN be able to deliver on the ambitious global development agenda set for the next 15 years, or does the world need a new breed of organisation to promote international cooperation? 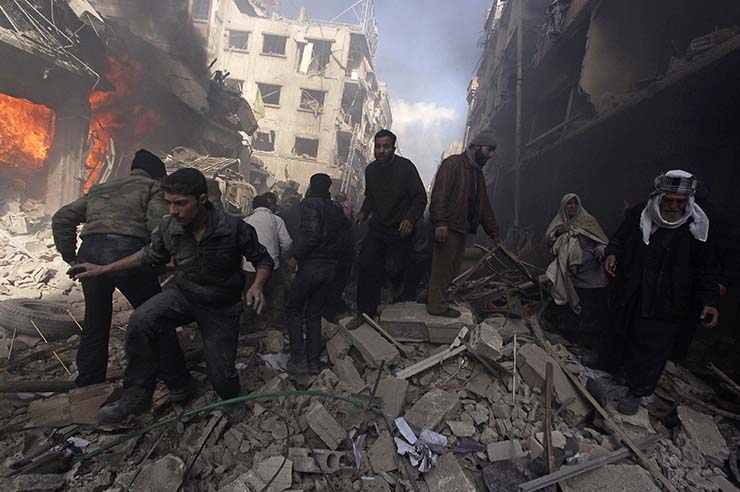 Damascus following what was said to be airstrikes and shelling by forces loyal to Syria’s President Bashar al-Assad. The scale of suffering caused by the war is seen by many as a glaring symbol of UN impotence and failure  © Reuters

A UN fit for purpose?

Will the UN be able to deliver on the ambitious global development agenda set for the next 15 years, or does the world need a new breed of organisation to promote international cooperation?

The path to consensus among UN member states is to ensure that all their respective interests are included, along with those of multiple lobbying groups and advocates, as well as every UN development organisation. If one locks national and agency representatives in conference rooms for two years, perhaps survival and a race to the bottom is not a bad result. Seventeen development goals and 169 explanatory paragraphs (with at least as many targets) resulted from the largest gathering ever of presidents and prime ministers – and a moral flogging from Pope Francis – at the UN summit of September 2015.

The outcome was Transforming our world: the 2030 Agenda for Sustainable Development. Optimists called it “aspirational” and “welcome idealism”, whereas an unkind William Easterly suggested a different meaning for the SDG acronym: “senseless, dreamy, garbled”. All too often the problem with UN deliberations is that process is more important than product; getting to an agreed text is a sufficient criterion for success, however lacklustre the result.

Our view is close to The Economist’s, which aptly characterised an earlier draft as “something for everyone has produced too much for anyone”. Among the first seven goals, there is a restatement and a further elaboration of most of the unrealised Millennium Development Goals (MDGs). And because ‘sustainability’ is UN-speak for environmental management, the majority of the 17 goals are wholly or partially concerned with managing resources, energy or climate change. The number of targets is so numerous that no country will be able to adopt all.

An exception is Goal 16 that, in acknowledgement of what is considered the main engine of development progress, deals with aspects of national governance, which include building strong and inclusive institutions, promulgating the rule of law, respecting rights and reducing corruption and “all forms of violence”. Another exception is Goal 17 that concerns the “means of implementation”, which contains some general statements acknowledging that the goals will necessitate substantial new resources for their realisation. A central problem, which is especially pertinent for Goal 16, is that the last two umbrella goals shelter a large number of issues dear to the West and contested by many countries of the Rest.

“The world we want”
If suitably adjusted to include realistic targets, if a proper monitoring system is put in place, and if adequate resources are available – obviously, some very big ‘ifs’ – this complex agenda is supposed to capture what UN publicity trumpets as “the world we want”. It will certainly play a role, although the goals do not encompass international terrorism, forced migration, cybercrime, capital flight, post-conflict reconstruction and other crises that undoubtedly will engulf the UN.

This agenda nevertheless constitutes a gigantic challenge to the UN development system on which successful implementation will at least partially depend. But what constitutes this system, and is it up to the job? In short, and as our Future UN Development System research project asks: what is the UN we want? It is certainly not the world organisation that we have. The UN needs to be fitter-for-purpose if it is to be a useful partner in the post-2015 era. But unlike most public organisations, there are no incentives to pursue cost-effectiveness because member states are either the UN’s interested patrons or its patronised partners.

There have been serious debates but only half-hearted efforts at reform, including the 2006 ‘Delivering as One’ initiative. But astonishingly, the most serious scrutiny of the overall shape of the system took place in 1969, and we could do far worse than revisit the recommendations of that ‘Capacity Study’, spearheaded by Sir Robert Jackson. While the importance of the world body in helping to confront a growing litany of global challenges has never been greater, the UN has never been more disjointed or demoralised. UN lifer and former Under-Secretary-General Dame Margaret Joan Anstee has lamented that after four-and-a-half decades, the Capacity Study remained “the ‘Bible’ of UN reform because its precepts are lauded by everyone but put into effect by no one”.

In light of the sorry record, the discouraged reader may very well be tempted to ask whether the system is actually capable of fundamental change. We have been asking that question in a series of public opinion surveys over the last four years among people worldwide who support and are usually familiar with the UN’s work. Samples in the United States and elsewhere would undoubtedly be more indifferent and probably more hostile towards the very notion of international cooperation and the role of the UN system.

However, a large majority of informed respondents in the latest global expert survey of December 2014 were optimists (77 per cent) who maintained that the system could change, while only a quarter remained pessimistic (23 per cent). The proportion of pessimists was smaller among emerging powers (15 per cent) and larger among developed countries (31 per cent). Over the years, voices from some 10,000 citizens (two thirds from the global South) have also identified possible directions for UN reform, with more optimists than pessimists.

Rankings of individual organisations have shown very wide ranges of perception of both relevance and effectiveness. An informed global expert public has called for the merger of many overlapping UN organisations – how could it be otherwise? For the system as a whole, the most urgent and doable changes are to modernise business practices, expand partnerships with other development organisations and clarify the relationship with the Washington-based financial institutions.

The views in the global South about the urgency of UN reform are often more strident than those in the North, although the support for a world organisation and UN system with less state control and more norm-making and operational autonomy are equally feeble.

Coalitions of the willing
Whether the UN’s development glass is half full or half empty, clearly there is very substantial room for improvement to get the UN we want, for the world we want – or even for the world that we have. At the global level, the importance of having a system is nowhere more evident than in the UN’s attempts to face up to major longer-term development challenges. If the UN is to have an impact in improving the planet’s environmental management, climate change, food security, migration and many other issues, it requires marshalling ‘coalitions of the willing’ of different organisations within its own development pillar (technical, normative and operational).

In spite of their obvious shortcomings, the Sustainable Development Goals provide a framework for an ambitious development agenda for 2016-30 with appropriate leadership. They contain the vocabulary to advocate for sensible priorities and sequencing for concessional finance and investment. This publication coincides with the beginning of a renewed development agenda and with the last year of current Secretary-General Ban Ki-moon’s tenure. One of his legacies, seemingly, will have been to preside over the continuing decline of the UN’s development system. Inertia will not be a viable organisational strategy for the next Secretary-General. We clearly require a different UN development system for the world we want.