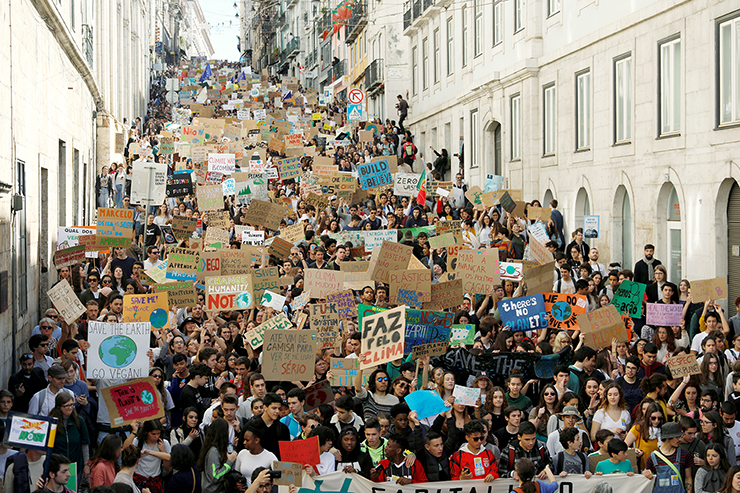 Students demand action on climate change in Lisbon, Portugal. The SDGs will only be achieved if ordinary citizens are given a more active role in framing policy. © Rafael Marchante/Reuters

The year 2019 is already proving to be one in which ordinary citizens are demonstrating an increased impatience with incremental changes that do not lend themselves to the bold and urgent actions needed to support structural and transformative change.

We have witnessed it in the street protests in Zimbabwe and Sudan and in the thousands of school strikes that have seen young people demand decisive action to combat climate change across more than 100 countries.

Since such change requires fundamental shifts in the way power and resources are traditionally organised, it is hardly surprising that the places where these efforts for change are located are outside the spaces dominated by established development actors.

Citizen action is instead being organised through hyperlocal, social movements: mass-based, non-hierarchical and cause-based groupings. These are providing voice and energy to grassroots-led and globally connected struggles for human rights and social justice.

What can those of us who are passionate about the potential of the Sustainable Development Goals (SDGs) learn from these trends? A good place to begin may be to reflect on some of the lessons we have learnt from the predecessor to the SDGs: the Millennium Development Goals (MDGs).

In the decade between 2005 and 2015, we saw the rise of a new generation of global activists. Groups that had previously never worked outside their immediate local contexts were increasingly learning how to enhance their impact by linking efforts with like-minded initiatives across borders.

Despite much criticism of the limited scope of the goals, there were strong examples of the MDG framework being used to expand the space for local organisations to exercise direct influence on national and global deliberations around policy and fiscal mechanisms relevant to the national achievement of the goals.

In apparent contrast, the SDGs – despite having been formed through what is possibly one of the most extensive processes of stakeholder and public consultation in the history of the UN – seem to have come up against several barriers to enabling an active local engagement with change efforts.

The conversation on the ‘how’ of the SDGs in the years following their adoption has been largely organised around technical complexities best suited to global deliberations in New York or Geneva, rather than as a response to urgent political narratives being shaped by citizen-led movements in Sudan or Serbia.

Restrictions on civil society
If we are serious about the SDG framework fulfilling its potential to secure the wellbeing of future generations, there is an urgent need for us to find new ways to make it relevant to issues that are bringing people to the streets around the world.

The SDGs will simply not be achieved without radically expanding the opportunities for ordinary citizens to play an active role in framing the policy and fiscal mechanisms that enable real change on the ground. And yet, there are now serious restrictions in civic space on every continent. These further undermine the ability of ordinary people to engage with the vision for a better future adopted by governments in 2015.

The CIVICUS Monitor, an online platform tracking civic space trends worldwide, indicates that a staggering 96 per cent of the world’s population – some seven billion people in 111 nations – live in countries where fundamental freedoms of expression, association and peaceful assembly are not properly respected and in some cases are being actively obstructed.

Civil society worldwide is facing more restrictions on its ability to operate than any time in recent history. As evidenced by our latest edition of the State of Civil Society Report, powerful interests on every continent are actively colluding to reverse commitments made by previous generations of leaders to lay the foundations for more just, peaceful and sustainable societies.

Worse still, the brunt of repressive and often violent actions that seek to reverse and undermine progression is being borne by communities that are the most vulnerable sections of society. These include women, migrants, refugees, LGBTQI people, indigenous communities and minority ethnic and religious groups.

Across Europe, for instance, major population blocs are being mobilised against excluded groups. Ethnic and faith identities are being distorted in the name of narrowly defined national interests to sow division for political ends. Elsewhere, as in China and India, excluded groups are being suppressed as part of a conscious strategy to promote a narrow and artificially homogenous official version of national identity.

Groups that represent and defend the rights of such communities – including trade unions, journalists and rights activists – are being attacked and intimidated with gross impunity even in established democracies such as the United States and Brazil.

Asking fundamental questions
This is a terrifying indication that the forces needed to hold governments accountable, and ensure they invest in effective responses to the social and environmental challenges we collectively face, are being heavily compromised. In response, we need to find more powerful ways to articulate the values that underpin the ambition and intent of the SDGs.

We need the discourse on the SDGs to be less about abstract targets and indicators, and more about the questions that are fundamental to the quality of rights that people experience in their daily lives. This includes framing questions about how we build better connections between trade unions, academics, think tanks and other parts of civil society to develop fairer economic alternatives, or how we develop new approaches to analysing and combating the growing power of anti-rights groups.

It also includes developing better ways to keep election periods free from misinformation and illicit interference, and advocating for stronger mechanisms to protect civic space and democratic freedoms. Internationally, it requires us to make a compelling new case for multilateralism as the only credible response to the major, transnational issues of the day – and to do this by actively creating more spaces for citizen voices in the current international system.

In short, the SDGs cannot be realised without expanding spaces where people can lead their own struggles and build bold, intersectional campaigns that ask the big questions about structural power. Across the world, many of us are doing this already, but we now need to do this more, and do it smarter.