The right to learn

Access to quality education remains an elusive dream for millions of children and young people across the Middle East and North Africa. How can we transform this dream into reality? 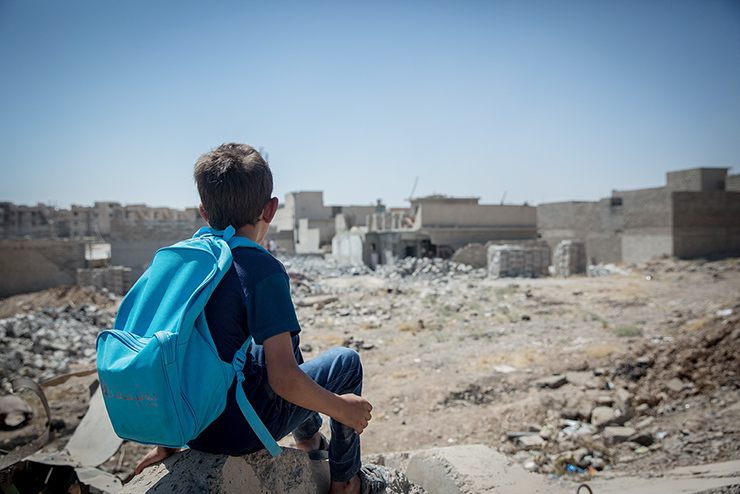 Akram, aged six, looks at the destruction in west Mosul, Iraq. Across the Middle East and North Africa, at least 15 million children aged five to 14 are out of school, with a further 11 million at risk of dropping out.
© UNICEF/UN0159073/Rfaat

The right to learn

Access to quality education remains an elusive dream for millions of children and young people across the Middle East and North Africa. How can we transform this dream into reality?

Millions of children and young people across the Middle East and North Africa hoped that the mass protests and political turmoil of 2011 would usher in a new era. They hoped that their calls for improved standards of living, participation, education and job opportunities would finally be answered. They hoped that their demands for peace and stability would be realised.

Yet eight years later, their dreams for a more hopeful, inclusive and peaceful future have largely been dashed – their hopes dimmed yet again by the years-long conflicts in Iraq, Libya, the State of Palestine, Syria, Sudan and Yemen. These drawn-out conflicts are not only risking children’s lives and bodies, putting them in the line of fire and curtailing their access to necessities like food, medicine, water and sanitation. These wars are also jeopardising their minds, spirits and futures by interrupting their education – one of the greatest determinants of a child’s future opportunities.

Pathway to prosperity
Education is not only the foundation of children’s futures. It can keep children out of the hands of predators, armed forces and groups, and away from danger. Schools are also a place where children can receive critical food, water, sanitation and healthcare. Schools provide stability, structure and routine – all counterbalances to the loss, fear, stress and violence that the children of conflict endure every day.

And in every society, education provides a pathway to prosperity, and even peace. It’s a proven way to break down inequality, fight poverty and create avenues of opportunity for young people – all of the ingredients needed for a better future for people and societies alike.

Across the Middle East and North Africa, at least 15 million children aged five to 14 are out of school, and nearly 11 million more are at risk of dropping out. In particular, fighting in Iraq, Syria and Yemen has reversed the progress made in access to education from 2005 to 2012, plunging regional enrolment rates to levels not seen since 2007.

Intense and indiscriminate attacks are killing and maiming children on their way to school. Every step that children take can be a danger, bringing them into contact with an unexploded ordinance – or predators looking to exploit or abuse them. Schools are even being directly targeted or used for military purposes, a flagrant violation of international law.

For the lucky children who are able to continue with their education despite the fighting, the challenge is also steep in terms of the quality of the education they receive. The region faces chronic and pervasive underinvestment in early childhood development and overall education quality. Students have to contend with outdated curricula and teaching methods that are failing to encourage foundational learning and skills development. Many leave school without the basic skills or qualifications they need to pursue higher education or job opportunities.

The region’s youth unemployment rates are the highest anywhere, at approximately 31 per cent in North Africa and 22 per cent in the Middle East.

As this region contends with protracted conflicts, it cannot risk leaving a generation of children and young people with no avenues to fulfil their potential. We must transform this legacy of hopelessness into one of hope, optimism and opportunity. Adolescents and youth currently account for nearly a quarter of the region’s population. With the right education and support, they can lend their hands to building a more prosperous and stable future for themselves and their communities.

But unleashing the potential of this demographic dividend requires urgent and significant action.

First, it needs governments and donors alike to increase investment in both the quality of and access to education in the region. Second, it requires governments to adopt creative and flexible learning opportunities for children living in communities affected by crisis, including via distance learning and by improving the portability of certification. Third, it requires ensuring a better match between the education and skills being acquired and local job markets. Young people should not only be learning foundational skills like reading, science and maths, but also modern transferable skills like digital communications, entrepreneurship and familiarity with green technology.

And finally, it requires putting an immediate end to the conflicts that continue to rage across the region. Adults must put children first by putting peace first. In this, we call on all government leaders, the private sector, civil society and humanitarian and development partners to help UNICEF turn up the volume on this critical issue.

Together, we must help young people across the region recapture the hope and sense of purpose that has been tragically lost over the past eight years.