The price of nature

By acknowledging the true value of our natural resources, we will be able to direct development so that it supports economy and environment 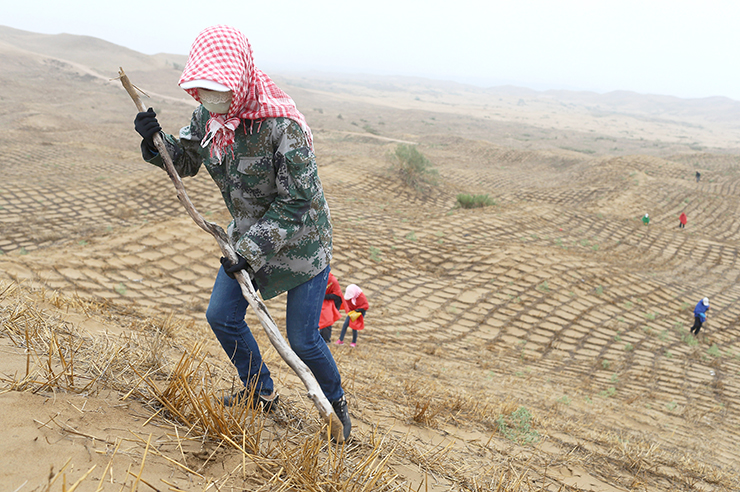 Sowing seed in hay grids to combat the spread of the Maowusu Desert near Lingwu, China. © Hong Wu/Getty Images

The price of nature

By acknowledging the true value of our natural resources, we will be able to direct development so that it supports economy and environment

Over the past 20 years, gross domestic product (GDP) has risen 50 per cent in most parts of the world. Millions have been lifted out of poverty, and we live better and longer lives than ever before. Much of this can be attributed to spectacular human ingenuity, innovation and technology in almost every part of the world.

The bad news, however, is that it has come at a cost we haven’t accounted for: the contribution of nature. Simply put, the value of our natural environment is not factored into the number-crunching when we calculate economic performance. Our economic model has depended and indeed thrived on the ‘gift of nature’ – and we see it as a gift that keeps on giving, and will keep on giving. This is a grave mistake, and it needs to change.

One example is topsoil, which makes it possible for us to grow food. It’s fast depleting. By 2050, 42 per cent of land will be useless if today’s techniques continue. Every minute, we lose land the size of 26 football fields. Water bodies are drying up too, and four out of every ten people don’t have enough water to drink. We also have to count the cost of environmental damage and pollution here and now: only 12 per cent of cities in the world have acceptable air quality. In many cities, a day out can mean the equivalent of smoking 40 cigarettes.

Our estimates of GDP growth are therefore flawed, masking losses we cannot begin to put a cost on. Over the last four decades, the gap between rich and poor has increased in almost every region of the world. Almost 800 million people live in extreme poverty, relying on common water bodies, land, biodiversity and ecosystems to survive. If these assets worldwide are under grave threat, then the ambition of the global development agenda, “to end poverty in all forms, everywhere”, is also under threat.

Much of the value that economies create is built upon a natural foundation – the air, water, food, energy and raw materials that the planet provides. Too much economic growth has come at the cost of the environment. We cannot afford to ignore the value and impact of nature if we want to end poverty and build a more sustainable and prosperous future.

So how exactly do we arrive at an understanding of economic growth and the role natural capital plays in propelling our progress? UN Environment’s Inclusive Wealth Index 2018 measures a nation’s wealth in terms of progress, wellbeing and long-term sustainability. Computed for 140 countries in the world, the index is a comprehensive analysis of each country’s productive base and the assets that determine human wellbeing – including produced, human and natural capital.

It reveals that while produced capital, health and education-induced capital have risen over time, the value of natural capital has diminished, indicating that we have grown at the cost of nature.

Changes in inclusive wealth can guide our understanding on whether countries are on a path of sustainable development – or not.

Yet even as our statistics ignore natural capital, the economic case for investing in natural capital remains huge. Take the case of land degradation in Asia. If we take no action, Asia could lose more than 53 per cent of annual total crop production due to the loss of topsoil. But taking action, and implementing sustainable land management practices by 2030, could create benefits of more than four times the investment. In 2017, BNP Paribas and UN Environment signed an agreement to establish partnerships that would improve the productivity of smallholder farmers and restore and protect forests through channelling $10 billion by 2025. This initiative shows that development capital can drive sustainable economic growth in emerging countries.

Technically and commercially viable solutions can improve water and energy efficiency by 60 to 80 per cent in construction, agriculture, transport and other key sectors, while saving between $2.9 and $3.7 trillion a year by 2030. Of all the environmental battles we are fighting at present, the one we run the biggest risk of losing is biodiversity loss and species extinction.

Billions of populations of mammals, birds, reptiles and amphibians have been eradicated all over the planet. In 2015 alone the world lost tree coverage roughly equal to the size of Uganda. Addressing this loss will depend on our ability to demonstrate real value.

For example, in Bhutan, UN Environment is helping the government to integrate this approach in new hydropower installations, looking at a ‘payments for ecosystem services’ scheme, potentially funded through royalties. In the Congo basin, we are mapping vast peatland reserves, which are valuable carbon sinks – like those found in Europe, Russia, Canada and over 180 other countries. And our World Conservation Monitoring Centre draws on over 17 million trade records and the latest scientific data to help UN Member States make decisions on wildlife, endangered species and protected areas, including some 2,000 decisions by the European Union.

Our development model for the future must be inclusive and sustainable, and account for the costs that growth places on our environment. It must build equally on economic, human and natural capital, instead of depleting it. We no longer have the luxury of choice.