The impact on education

The pandemic threatens to undo recent gains in access to learning, damage the long-term prospects of millions, and push the goal of equitable, quality education for all beyond reach. Governments must urgently prioritise education as part of their pandemic response, with a focus on protecting marginalised groups 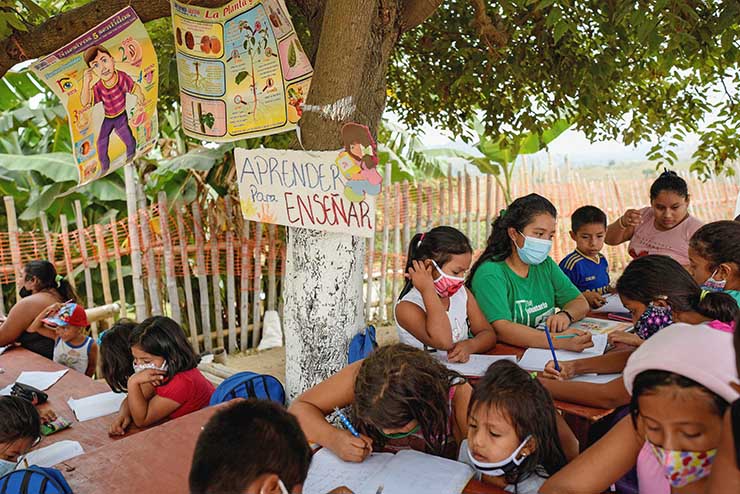 A 16-year-old student leads an outdoor class in Guayaquil, Ecuador. The children in the low-income neighbourhood of Realidad de Dios have been unable to attend virtual classes during the pandemic. © Santiago Arcos/Reuters/Alamy Stock Photo

The impact on education

The pandemic threatens to undo recent gains in access to learning, damage the long-term prospects of millions, and push the goal of equitable, quality education for all beyond reach. Governments must urgently prioritise education as part of their pandemic response, with a focus on protecting marginalised groups

COVID-19 has caused the largest mass disruption of education in history. Education disruption initially peaked in April 2020, when more than 190 countries instituted country-wide closures resulting in 90 per cent of learners – over 1.5 billion people – being forced out of school and education institutions. Another 100 million were affected by localised closures in six countries. Additionally, 258 million children were already out of school: 30 per cent due to conflict and emergency, and the rest because of entrenched inequities, according to estimates by the Overseas Development Institute and UNESCO. These circumstances will be exacerbated by the pandemic.

The UN has warned that coronavirus threatens progress on all the Sustainable Development Goals (SDGs) and may reverse gains already made. The gravity of mass education disruption on SDG 4 (quality education) cannot be overstated.

While there were pre-pandemic gaps in education, particularly for the most vulnerable groups, globally, we experienced a sustained period of improvements, especially in basic education. There was near universal enrolment in primary levels, substantial increases in secondary, and significant improvements in gender parity.

However, the pandemic exposes the fragility of education access and quality, and of those gains.

At the time of writing, UNESCO estimates that almost seven months after the COVID-19 emergency was declared a pandemic, nearly one billion children and youth still have not returned to school or have resumed their education in deeply precarious circumstances. This is staggering.

The pandemic will exacerbate existing inequities in education and create new ones in all countries, with deeper implications for low-resource and crisis and emergency contexts. It will have different institutional and individual effects. In other words, the effects of the pandemic on education disruption will vary within and across different countries and social groups.

A resilient recovery will be affected by the capacity, supply and financing issues that characterised education systems going into the pandemic, new pandemic-related obligations on states, and the level of crisis preparedness that governments and education systems had in place.

Leaving learners behind
The existing learning crisis meant that more than 407 million children and youth entered the pandemic without having mastered basic skills, despite having had some formal schooling. These learning gaps will be deepened, and new gaps will emerge, particularly for learners who were and are excluded from remote and distance learning.

First responses in many countries were led by a rapid shift to emergency online learning. This is not appropriate or feasible for all learners, contexts, levels or subjects, and is worsened by the digital divide – a gap that disproportionately affects girls and women, lower-income households and remote populations in all regions. Furthermore, the needs of learners with disabilities tend to be neglected when emergency changes to delivery modes are made.

Initial global estimates by UNESCO indicated that more than 500 million children and youth could not access distance learning during the first phase of school closures. Furthermore, systems were not prepared to support teachers, facilitators and parents or caregivers in optimally using technologies for learning. Studies of context-specific first responses are nascent. Two rapid assessments indicate similar patterns.

In India, a survey by Oxfam India of nearly 1,200 parents and 500 teachers in five states (Bihar, Chhattisgarh, Jharkhand, Odisha and Uttar Pradesh) found that a combined 80 per cent of parents accessing private and government schools reported that no education was delivered during lockdown. In Ethiopia, a survey of 127 school principals and 316 teachers across seven diverse regional states and one city administration found rural–urban gaps in access to electricity and technologies such as radio, television and the internet complicated the delivery of remote and distance education (Yorke, L., Rose, P., Hagos Hailu, B., & Woldehanna, T. (2020).). The same survey found that only 57 per cent of urban teachers and 45 per cent of rural teachers were able to provide support to students during school closures, mainly face to face. The teachers indicated that there were efforts to make adaptations for disadvantaged groups, including girls, students from low-income families and low-performing students. However, they felt that these students were also the least likely to benefit from distance learning.

Capacity problems
Several capacity and supply issues threaten safe school operations and the implementation of physical distancing measures. Firstly, putting in place even the most basic measures for safe school reopening is compromised in many countries. The 2018 World Health Organization and UNICEF Joint Monitoring Programme for Water Supply, Sanitation and Hygiene (WASH) global baseline report found that only 53 per cent of schools surveyed in 81 countries had basic hygiene services, defined as a handwashing facility with soap and water. Over 850 million children attended schools without these services, highlighting the urgency to upgrade basic physical infrastructure.

Secondly, the pandemic will affect the supply of teaching and education personnel. The gaps are more acute in some countries. The pandemic is exacerbating these pressures. In some cases, unplanned attrition due to health and safety concerns may combine with existing staff shortages as the need for even smaller class sizes is heightened to safely reopen schools. Teachers are key to improving education quality and learning outcomes.

The UNESCO Institute for Statistics estimated in 2016 that there was a 68.8 million shortfall of teachers to achieve SDG 4: 24.4 million in primary and 44.4 million in secondary. It forecast that an additional 3.4 million primary and 16.7 million secondary teachers were required to expand access to education, reduce class sizes and replace staff lost to attrition. Supply is also an issue regarding single-classroom and single-teacher schools, and in conflict and existing emergency contexts.

Urgent need for equitable finance
An analysis by the World Bank stresses that the pandemic has created a need for increased domestic education spending. However, it finds that there is “evidence that some countries are already cutting their education budgets to make space for the required spending on health and social protection”. This will exacerbate education sector constraints, as education systems were already inadequately and inequitably financed.

One in three countries entered the pandemic with under-resourced education systems, according to UNESCO. Another World Bank analysis showed that, while public education expenditure increased across all country-income groups between 1999 and 2015, with much higher average increases in low-income countries, spending was relatively constant as a proportion of GDP.

Finally, aid to education has been volatile. In 2018, official development assistance disbursements to education reached their highest-ever recorded levels, according to a recent analysis by the Global Education Monitoring (GEM) Report Team. But, this was after a long period of relative stagnation from its previous high point in 2010.

The GEM Report Team warns that the economic effects of COVID-19 could result in a fall of up to $2 billion in aid to education by 2022, and that it could take another six years until the levels of 2018 are reached again. It recommends that the share of education aid must be protected, that there should be additional flexible funding for COVID-19 and education, and that bilateral donors should consider consolidating fragmented aid through multilateral channels.

Right to education
In countries with large proportions of people living in poverty, engaged in informal labour, and with restricted social safety nets, potential death or serious illness caused by hunger, starvation and other diseases may be more compelling than COVID-19. However, the pandemic has aggravated these conditions. This puts the transformative effects of education on health outcomes, infant and child survival, girls’ and women’s empowerment, employment and economic growth even more starkly into focus.

The unalienable right to education remains. Prioritising education is key to long-term economic recovery and social stability, without which the future of sustainable development for all will be irrecoverable.

References are available from the author.