The IMF, World Bank and SDGs

The SDGs have required a thorough reassessment of the way the Bretton Woods Institutions operate. Are they still relevant, and what role should they play to advance the SDGs? 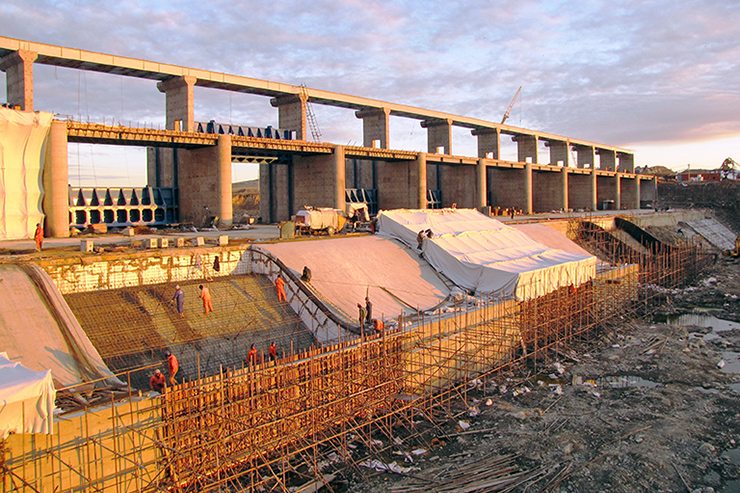 Construction of Intumak Dam on the Nura River, Kazakhstan, part of a new generation of World Bank water projects. Large dams came to symbolise what many saw as the failings of the World Bank, a narrow focus on economy, with a debt burden attached. © Shynar Jetpissova/World Bank

The IMF, World Bank and SDGs

The SDGs have required a thorough reassessment of the way the Bretton Woods Institutions operate. Are they still relevant, and what role should they play to advance the SDGs?

The 2030 Agenda for Sustainable Development has been crystallised into concrete form through the 17 Sustainable Development Goals (SDGs) and 169 targets. These were meant to replace and carry on the unfinished agenda of the eight Millennium Development Goals (MDGs). The two Bretton Woods Institutions (BWIs), the World Bank and the International Monetary Fund (IMF), were considered close partner organisations by the United Nations in terms of facilitating the implementation of the MDGs. They are also closely involved in partnering with the UN in the implementation of the SDGs.

However, their role (particularly that of the IMF) in implementing the MDGs came under close scrutiny, and was criticised by the UN and civil society organisations. To be fair to the IMF, while this criticism is not entirely lacking in merit, the MDGs were not as closely aligned with their mandate as some of the SDGs are. The World Bank, which has a treaty-based relationship with the UN, has been working relatively more closely with the UN as an implementation partner for both the MDGs and SDGs. But it too does not escape criticism.

Facing a backlash
The objections against both the BWIs are on similar grounds: their focus on an almost canonical growth-first paradigm over other goals such as inclusion and environmental sustainability. The BWIs have been some of the strongest proponents of globalisation; promoting capital flows, liberalisation and privatisation, and are now facing a backlash from governments and civil-society organisations alike. Their ability to impose conditionalities on countries who have few alternatives for financing has also led to questions of whose side they are really on.

Essentially, the logic of a multilateral financial order should be to help developing countries catch up with developed ones, so that bargaining power is more evenly distributed. That has clearly not been the case: developing countries have ratcheted up debt at an alarming pace and convergence with developed nations has slowed. For some, it is ironic that the BWIs are being made to revisit their aims through the SDG framework.

To state the issue another way: the BWIs are mandated to help countries achieve economic growth. This has normally meant a narrow definition of growth in terms of macroeconomic management (like debt sustainability) in the case of the IMF, and a deregulation-based framework in the case of the World Bank – for instance through its work through the ‘ease of doing business’ survey. This is why the BWIs have at times been at odds with many UN organisations whose focus on growth is more tempered and less rigid.

UN agencies like the UNDP, UNIDO, UNESCO, UNCTAD or the UNFCCC that are working closely on the SDGs have a very clear socio-economic mandate and are not unrelentingly growth focused. But most importantly it is the governing structure of the BWIs that differentiates them from the universe of UN organisations.

Decision-making within the BWIs’ governance structures lies with the developed economies, especially the US and Western European economies, while that of the UN agencies more closely reflects the multilateral UN structure. In fact, there is a historical controversy around the BWIs’ governance structure: namely, a failed early attempt by the ECOSOC to integrate the IMF and World Bank as specialised UN agencies.

Attaining a balance
The SDGs should, however, provide a way for the BWIs to deliver both the Global Goals and their own remits as responsible lenders. This is because the way the SDGs are structured means that it is possible to pursue social development alongside the maintenance of financial stability. This is a key balance to attain. The issue is not about maximising returns: the BWIs aren’t looking for that either. Instead, they need to rule out interventions that have a high financial return but are socially damaging.

As lending institutions with shareholders, they have to be financially responsible, as they are ultimately transferring financial resources with the hope of repayment in some form or other. Hence they need to look at how and where repayments will be coming from.

This does not mean they can ignore growth. But, equally, it does not rule out their interest in issues of social value, borne out by their close involvement with the SDGs. The BWIs’ earlier mistake was to believe that all it took to tackle broader issues of social development were higher rates of growth.

Both the IMF and World Bank have undergone visible changes in the years since the MDGs. And this change is strengthened by the SDG’s better alignment with the IMF’s and World Bank’s mandates: both broadly at the levels of the five pillars of people, prosperity, planet, peace and partnership, and more specifically with respect to those SDGs related to ending poverty, reducing inequality, providing decent work, building strong institutions and climate change. For instance, some of the recent work done by the IMF has been on reducing inequality. There is recognition of the fact that high and sustained levels of inequality have a pronounced negative effect on social cohesion and are inimical to growth.

The World Bank has moved closer to SDG 13 on climate action with its recent announcement that it will no longer invest in projects involving fossil fuels. Both BWIs have significant anti-corruption agendas and are already engaging with SDG 16 on building strong institutions. The Goals focused on eradicating poverty (SDG 1), providing decent work (SDG 8), or building sustainable industry (SDG 9) fit easily into the ambit of the BWIs.

Issues of taxation pricing are critical to ensuring practical solutions for environmental sustainability. Here, the BWIs can be called upon to work on these in line with the environmental SDGs: 6, 7, 12 and 13. Gender equality (SDG 5) is also a critical focus area for both.

Playing a critical role
But to consider the IMF and World Bank as partners only for specific SDGs is not doing justice to the range of capabilities they possess or how these complement the work of UN agencies. Indeed, the UN system has recognised this. The BWIs have a critical role to play in the ‘financing for development’ agenda.

The IMF has embarked on a series of studies that outline what the financing gap is for funding the SDGs. This recognises the fact that achieving the SDGs will require significant investments by developing countries and need careful planning and foresight. For instance, according to an IMF study the increase in average additional annual spending to achieve some key SDGs by 2030 is 15 percentage points of GDP for the average low-income developing country. This is a huge ask for developing countries, so the competencies of the World Bank and the IMF are being mobilised to address this financing gap.

Along with the United Nations Department of Economic and Social Affairs, which provides capacity-building support to countries for the SDGs, the IMF and the World Bank can play a key role in country-level uptake and monitoring through their programming experience and strong in-country presence.

The BWIs’ involvement in both finance and development means that they have a critical function to fulfil in terms of meeting the SDGs. Complementarities also exist with the UN agencies responsible for working on the SDGs. Thanks to external and, to some extent, internal pressure, it would be safe to say that the BWIs are no longer holding on to the orthodoxy of a growth-first approach over projects that deliver social value. As ‘owners’ of the SDGs, it is important for the UN agencies to provide the correct nudge to the BWIs. But the BWIs have also come around to acknowledging that a broad-based shared prosperity is the key to ensuring global stability.