None of us will be safe from coronavirus until all people – not just those in rich countries – can access safe and effective vaccines. As with the work needed to achieve the SDGs, tackling COVID-19 demands nothing less than an urgent and genuinely multilateral effort involving all nations 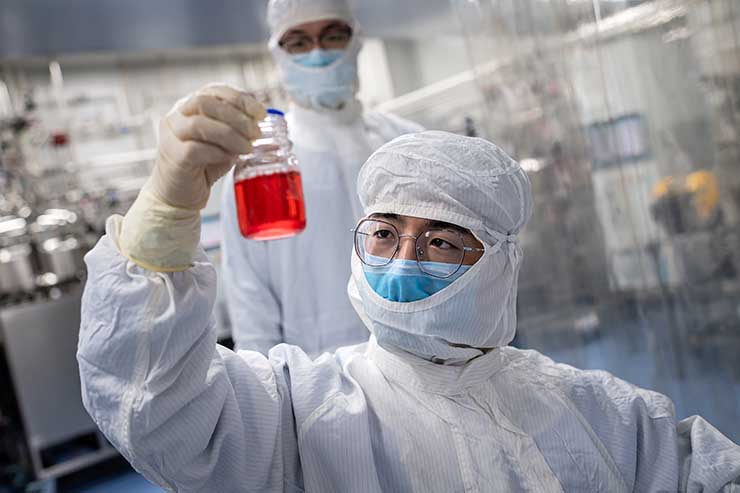 Researchers at a Sinovac Biotech laboratory in Beijing, conducting clinical trials on one of the several potential vaccines being developed in China. © Nicolas Asfour/AFP via Getty Images

None of us will be safe from coronavirus until all people – not just those in rich countries – can access safe and effective vaccines. As with the work needed to achieve the SDGs, tackling COVID-19 demands nothing less than an urgent and genuinely multilateral effort involving all nations

The COVID-19 pandemic has ushered in an inspiring new era in humanity’s age-old struggle to fight epidemics. Just consider the contrast between the speed of COVID-19 product development and the pace for past outbreaks.

Nearly four decades ago, in June 1981, researchers in the United States reported that a group of young and previously healthy men living in Los Angeles were suffering from a persistent form of pneumonia that was difficult to treat. Two of the men had died, and doctors suspected the patients were suffering from a virus that was destroying their immune systems.

It took researchers another two years to identify the human immunodeficiency virus (HIV) and connect it to the condition that we now know as AIDS. It wasn’t until 1985 that a reliable antibody test was developed to confirm HIV infection.

In 1994 – 13 years after the first reported AIDS cases – the first safe and effective treatments for HIV were approved. But it wouldn’t be until 2001 that global partners, under the leadership of UN Secretary-General Kofi Annan, would start extending affordable access to these treatments to the tens of millions of people living with HIV in sub-Saharan Africa and Asia. By then some 1.6 million people a year were dying of AIDS.

Now consider the timeline for the COVID-19 response. In late December 2019, doctors in Wuhan, China reported a sudden surge in serious cases of viral pneumonia caused by an unknown pathogen. By 9 January 2020, Chinese authorities and the World Health Organization had announced the discovery of a novel coronavirus, the virus we now call SARS-CoV-2. Over the weekend of 11 and 12 January, Chinese authorities shared the full sequence of the coronavirus genome with scientists around the world.

Within days the first vaccine candidates against SARS-CoV-2 were put forward, and in March – a little more than two months after the start of the COVID-19 pandemic – the first people were enrolled in clinical trials to assess the safety and immunogenicity (ability to provoke an immune response) of vaccines against the virus.

If several of these vaccine candidates prove successful – and clear the remaining hurdles of efficacy demonstration, regulatory approval, scaled manufacture, financing, and vaccine distribution – we will be able to end the acute phase of the COVID-19 pandemic in 2021 by ensuring the equitable distribution of vaccines to everyone who needs them, everywhere around the world.

Essentially, we could accomplish in just a year or two what it has taken the world 40 years to achieve regarding AIDS.

Major advances
These viruses – HIV and SARS-CoV-2 – and the circumstances surrounding them are different. But, clearly, much progress has been made. There have been major advances in research and development. We now have powerful tools that allow scientists to sequence entire genomes in a matter of hours, identify key sequences of genetic code, and then make them into candidate vaccines in a matter of days.

Research innovations by themselves, however, will not be enough to tackle COVID-19. Governments, businesses, multilateral institutions and other partners must work together to share resources, build on their relative strengths and expertise, and make sure that new diagnostics, therapeutics and vaccines can benefit every person on the planet. This approach is not only more equitable, it also is more effective. With COVID-19, the reality is that no one is safe until everyone is safe. New modelling from Northeastern University in the United States helps to illustrate why.

Ensuring equity for all
Data scientists there recently analysed two scenarios. In the first, vaccines are distributed equitably according to countries’ populations. In the other, which approximates what we’re currently seeing as countries lock in future supply, the world’s 50 highest-income countries get the first two billion doses of vaccine.

In the second scenario, the virus continues to spread unchecked for four months in three quarters of the world and almost twice as many people die. Moreover, the risk of reintroductions of COVID-19 in the world’s wealthiest countries remains high, putting populations in Europe, North America and East Asia at continued risk.

That’s why a multilateral approach to global health is so essential. The Access to COVID-19 Tools Accelerator – known as the ACT-Accelerator – is a partnership launched at the end of April 2020 that brings together governments, scientists, businesses, civil society, philanthropists and global health organisations. Its goal is to move the world out of the current crisis phase of the pandemic by supporting the development and equitable distribution of the tests, treatments and vaccines the world needs to reduce mortality and severe illness.

Since its launch, we have seen growing support from governments around the world for the ACT-Accelerator. G20 health and finance ministers recently endorsed it and encouraged further financial support from G20 member states. Three organisations leading the charge to develop and distribute vaccines globally – the World Health Organization, Gavi and the Coalition for Epidemic Preparedness Innovations – announced in September that 64 high and upper-middle-income countries had agreed to join the COVAX Facility – the vaccine arm of the ACT-Accelerator. To date, ACT-Accelerator members have raised nearly $3 billion – a critical down payment on the estimated additional $38 billion that will ultimately be needed.

When Bill and Melinda Gates created their foundation two decades ago, they committed themselves to the goal of ensuring that every child has the opportunity to lead a healthy and productive life. COVID-19 has made that goal more challenging. But it has also clarified what we must do, as a global community, to ensure equity for all.

It starts with global partnerships and recognising that we can accelerate progress by working together. Progress is possible, but it is not inevitable, and nothing has demonstrated that principle more than the COVID-19 pandemic.

Since 1990, we have become used to statistics that demonstrate steady progress in all key indicators of global health, with fewer children dying before their fifth birthday, fewer mothers dying in childbirth, fewer families struggling to put food on the table, and more girls going to school.
But three decades of steady progress have suddenly ground to a halt, and the world faces major reversals if we do not commit to working together with unprecedented urgency and an earnest commitment to multilateral collaboration.

Last month, the Gates Foundation released its annual Goalkeepers report, which tracks 18 indicators included in the UN’s Sustainable Development Goals. It shows that already in 2020, the pandemic has pushed nearly 40 million people back into extreme poverty. Child immunisation rates – which had reached 84 per cent globally – have returned to 1990s levels. And COVID-19 is rapidly eliminating hard-won gains in social and economic equity, deepening divisions of race, geography, gender and wealth.

So the most important question we face is how to renew progress and get the world back on track. The answer must start with focusing on what we can do – together – to end this once-in-a-century pandemic.