The future we want, the UN we need

People have called for a greener, fairer and more inclusive future for the UN’s 75th anniversary, marked, as it was, by unprecedented challenges – we must respond 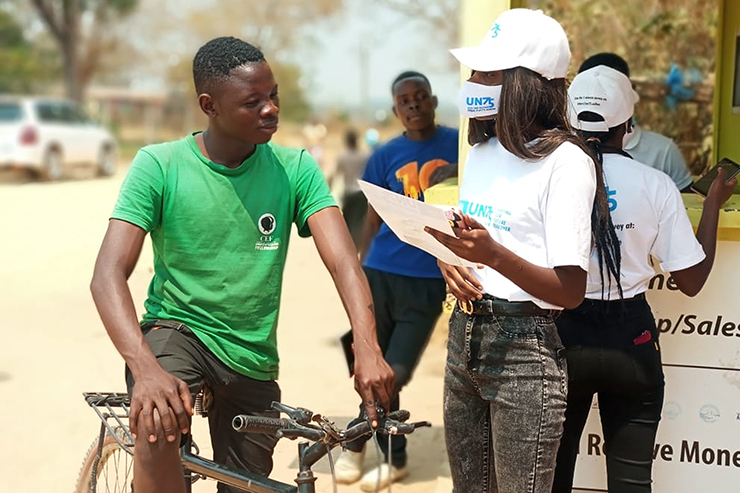 A volunteer gathers UN75 survey responses in rural Zambia, part of the global conversation that has surveyed over a million people. © UN Zambia

The future we want, the UN we need

People have called for a greener, fairer and more inclusive future for the UN’s 75th anniversary, marked, as it was, by unprecedented challenges – we must respond

By Natalie Samarasinghe Chief of Strategy, Office of the Special Adviser on the UN's 75th Anniversary Claire Manuel,

Seventy-five years ago, world leaders did something extraordinary: they created the United Nations. Born from the ashes of war, the UN is often romanticised as a product of global idealism – representing the hopes of war-weary populations for a better future. But it was equally, if not more so, a hard-nosed response by wartime leaders who recognised that the security and welfare of their citizens were better secured through cooperation and compromise than rivalry and war.

Unprecedented global pain and suffering led to this realisation. What will it take today? A global health emergency that has reversed hard-won development gains, achieved over decades, in a matter of months? The existential risks of climate change and nuclear weapons? Seismic shifts in demography and the digital sphere? Rising geopolitical tensions? Deepening inequalities? Widespread discontent?

Even before COVID-19 turned our lives upside down, the UN did not want its 75th anniversary to be treated as a celebration. Instead, our Secretary-General, António Guterres, saw this as an opportunity to listen to the people we serve, to understand their hopes and fears for the future and their expectations for international cooperation – and for the UN in particular.

The world’s largest conversation
In January 2020, we launched UN75: a global conversation on how to close the gap between the future we want, set out in the 17 Sustainable Development Goals (SDGs), and where we are headed if current trends continue. Building on the MY World survey conducted ahead of the SDGs’ adoption, our vision was to spark discussions in all settings – from classrooms to boardrooms, parliaments to village halls – to increase trust and action within communities and across borders, sectors and generations.

The pandemic has made that work more challenging – but also more urgent. It has exposed the fragility not only of our health systems, but of all our structures. At the same time, it has underscored how interconnected we are, and how crucial it is for us to work together.

UN75 engaged people across the world in re-imagining our future, and gave them an opportunity to shape our response to COVID-19. We are at a tipping point – political, social, economic and environmental – and it is vital that people, particularly the young and marginalised, have a voice as decisions are taken that will have lasting consequences for humanity.

To date, over a million people, from all countries and walks of life, have shared their views by taking our survey – online, or via SMS, telephone and local outreach. Tens of thousands have taken part in more involved conversations: ‘UN75 dialogues’ – virtual and in communities, where possible. We also worked with Edelman Intelligence and the Pew Research Center to poll 50,000 people in 50 countries, to ensure we had responses from a representative sample of the global population and not just those inclined to engage with us.

In addition, we analysed print, broadcast, online and social media in 70 countries to get a sense of discussions outside the UN75 initiative. And we mapped academic and policy research to provide expert perspectives on global challenges.
Together, these different strands represent the UN’s most ambitious effort to crowdsource priorities and solutions, providing unique insights into the future we want, and the UN we need, at this time of deep challenge and anxiety.

What the world wants
In a world that feels increasingly polarised, perhaps the most striking finding to emerge is how much we have in common. Amidst the current crisis, the immediate priority for most people, whether in rich or developing countries, is access to basic services: healthcare, education, and safe water and sanitation. They also want to see more international solidarity and support given to those hardest hit: from tackling poverty and inequalities to boosting employment.

Looking to the future, their overwhelming concern is our inability to stem the climate crisis and destruction of our natural environment. They also want action to protect human rights, address conflict and reduce corruption.

Across all ages, regions and social groups, there is overwhelming support for global cooperation – not merely as something that is desirable or important, but as essential to overcoming the challenges we face.

And people are thinking big. In our dialogues, participants called for the global economy to be transformed. They discussed universal health coverage, universal basic income and affordable access to technology. They called for fossil fuel subsidies to end, for lethal autonomous weapons to be banned. They issued a clear demand for greater inclusion of civil society and youth in decision-making at all levels, including at the UN.

Turning point
While we rightly celebrate the gains we have made over the past 75 years – from decolonisation to the eradication of smallpox and improvements in living standards – too many have been left behind. Too many of us contend with violence, discrimination and deprivation on a daily basis. Too many have seen their fortunes worsen, as others have profited.

The SDGs were off track before the pandemic. One in three people did not have access to safe drinking water. Over half the global population lacked access to adequate sanitation services. Not a single biodiversity target, adopted to great fanfare a decade ago, has been achieved. This is particularly concerning given that 60 per cent of all known diseases, and 75 per cent of new infectious diseases pass from animals to humans.

Now, we are seeing the first rise in global poverty in over two decades, and the first drop in human development – life expectancy, health and education – since 1990. Global hunger is increasing. In South America, 17.1 million people are severely food insecure, compared with 4.5 million just seven months ago.

This must be our turning point. Our aspiration cannot be to return to how things were before, with large swathes of the human family stymied by a system that has never worked for them. We must build forward, not back. We must build on people’s hopes and needs, and build up those most in need.

The pandemic has shown that huge transformations are possible, and vast sums of money can be deployed quickly, when political will is aligned with public support. We can turn this crisis into an opportunity by taking decisions now that put us on a path to a safer, fairer and more sustainable future.

Making UN75 count
The good news is that path exists. The SDGs are designed to address the fragilities that this pandemic has exposed. What we need now is increased ambition to deliver them.

The Secretary-General has called on countries to adopt a new social contract that prioritises the needs of the most vulnerable, promotes green jobs and sustainable growth, and makes bailouts of industries such as aviation and shipping conditional on aligning with these goals. At the international level, he has called for a new global deal that delivers on global public goods and puts people and planet above profit. And he has called for multilateral institutions, including the UN, to become more networked – linking institutions across sectors and geographies – and more inclusive, drawing on the capacities of civil society, youth, business, philanthropy, regions and cities, and academic and scientific institutions.

This will require the same combination of vision and pragmatism that inspired the UN’s founding 75 years ago. In recent times, this has seemed in short supply. But on 21 September, the UN’s Member States adopted a declaration for the anniversary that commits them to responding to the global consultation conducted this year, and tasks the Secretary-General with recommending next steps.

This year is unlikely to be remembered for being the UN’s 75th anniversary. But 2020 could still become the year we turned things around, if we stand together and act now.