While headline figures on poverty reduction have made for impressive reading, the burden on those left behind has fallen heaviest on minorities and indigenous populations. Have the SDGs got what it takes to lift these groups of people out of poverty for good? 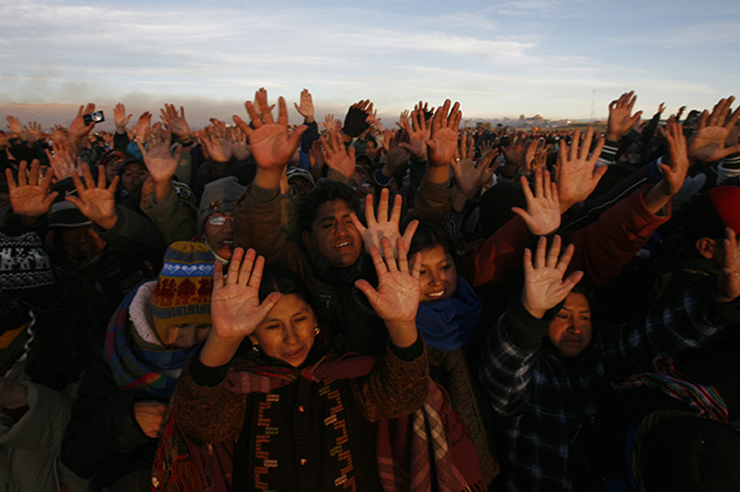 Celebrating the Aymara Indian New Year at the winter solstice in Tiahuanaco, Bolivia. The indigenous peoples of Latin America suffer social exclusion, poverty and poor access to health: infant mortality rates are 60 per cent higher than for non-indigenous children in the region  © Reuters/Gaston Brito

While headline figures on poverty reduction have made for impressive reading, the burden on those left behind has fallen heaviest on minorities and indigenous populations. Have the SDGs got what it takes to lift these groups of people out of poverty for good?

It might be helpful to begin by clarifying what the Sustainable Development Goals (SDGs) are not. Firstly, they do not present a model of future development that is radically different from that envisaged by the Millennium Development Goals (MDGs). The individual goals and targets have grown in number, of course, and they now explicitly aim at sustainability. But apart from potentially applying a brake to the more carbon-intensive motors for growth, the model of human development that ends in prosperity is essentially unchanged. Secondly, the core means for achieving the overarching objective of ending poverty – international cooperation and partnership for development – remain similarly unaltered. In sum, the SDGs can be seen as completing and deepening the work of the MDGs.

But because of the way in which extreme poverty is structured in the world today – to say nothing of climate change – just continuing the approach taken for the MDGs will not be enough. To understand why, we need to look at how the MDGs often failed minorities and indigenous peoples. The same processes of ethnic or religious discrimination prevalent in wider society are frequently replicated in development interventions. Even in UN agencies, national staff are typically drawn from majority elites, and international staff, whether from lack of ambition or a misplaced sense of cultural sensitivity, refrain from asking questions when programmes fail to reach the most marginalised communities.

The impact of natural resource exploitation projects – mining, logging and agricultural industrialisation – may benefit some people, yet the communities expropriated from their lands rarely benefit significantly and are often left destitute. Interventions may begin with the good intention of facilitating the participation of those affected, but for indigenous peoples in particular, they can have little effect unless they recognise the principle of free, prior and informed consent. The failure to achieve development for indigenous peoples often results from a refusal to plan interventions with indigenous peoples.

But the most compelling reason for a new approach derives not from the specific failures of the MDGs but from their overall success. The headline goal of halving extreme poverty, for example, was achieved well ahead of the 2015 deadline, as was the goal of halving the proportion of people without access to improved sources of water. Major strides forward have also been made in primary school enrolment and in cutting child mortality. It is important to recognise that these achievements have, in many cases, benefited minorities too. But as the general incidence of extreme poverty has declined, a larger proportion of the remaining poor are now minorities or indigenous peoples.

Poverty in the world today increasingly has an ethnic or religious dimension. According to World Bank figures, in both India and Vietnam, for example, the first 10 years of the MDGs saw poverty rates slide for both the general population and for minorities. But in India, the resulting poverty rate among Dalits and Adivasis was twice that for others, and for Vietnam’s minorities, some three times that for the majority population. Minority Rights Group International has estimated that over half of the world’s children who remain out of school – including in Ethiopia and Kenya, as well as across south Asia – are now members of minorities or indigenous peoples.

Eradicating extreme poverty is not just a harder challenge than halving it; it is of a different order. More of the same won’t do. People who are extremely poor can no longer just be seen as the not-yet prosperous. They are poor for a reason.

It is sometimes argued that the huge progress made towards pulling over a billion people – most of them in China – out of extreme poverty would mostly have happened anyway, without the MDGs. But that is beside the point. Those who first escape the poverty trap will, almost by definition, not be the hardest-to-reach groups. And while they may not be the poorest, their (modest) economic empowerment complements national growth strategies that partly depend on expanding the middle class as an internal market for goods and services.

MDG-driven interventions in the healthcare field have also had a tendency to concentrate resources on those who are easiest to reach: mostly urban populations from majority groups. Yet with challenges such as reducing child mortality, there are strong indications that focusing resources on the poorest and most marginalised yields the strongest results. In an influential study, Narrowing the Gaps to Meet the Goals, UNICEF showed that implementing such an equity-focused approach meant that each $1 million invested would avert 60 per cent more under-five deaths than the current intervention path.

This finding accords with other authoritative studies looking specifically at development challenges for minorities or indigenous peoples. As far back as 2011, the World Bank concluded that attaining the MDGs for indigenous people and ethnic minorities requires innovative approaches: “They may be hard to reach because they live in remote locations with poor transport. They may also suffer from social and economic discrimination and government neglect.” Noting the lack of data, the Bank highlighted the need to target groups more tightly and to “raise the quality of services by increasing the accountability of service providers to their clients”.1

Now is not the time to abandon universal targets. Eradicating extreme poverty and other universal targets, such as ending preventable child mortality, imply at the very least a commitment to delivering for all – even if they fail to specify necessary steps for getting there. But by themselves they are insufficient, for precisely the reasons identified by the World Bank: a continuing blindness to the pervasive effects of official and societal discrimination and a failure of accountability to the most marginalised groups.

SDG 10 – advocated strongly by civil society as well as some UN system agencies – introduces new targets for reducing inequality. Many of the targets, however, are vague – a deficiency that looks unlikely to be remedied by the inter-agency expert group tasked with drawing up indicators.

When it comes to reducing inequality, it should be recalled that the measure is everything. It is quite possible for a country to substantially improve its Gini coefficient, for example, and still leave the situation of its most impoverished minorities unchanged.

Nor should we be naive about the political obstacles that remain. Politicians, particularly in south Asia, wishing to emulate China’s strategy for growth may well regard their own sources of ultra-cheap labour as an advantage to be maintained, rather than a scourge to be eradicated. In sub-Saharan Africa, despite significant economic growth, the size of the middle class (even when defined using the minimal measure of those earning between $10 and $20 a day) remains stubbornly small, according to the Pew Research Center. Ninety per cent of the population, meanwhile, earns less than $10 a day.

There is little in the SDGs that will guarantee that most minorities and indigenous peoples will escape poverty by 2030. Yet there is much there that could enable such a journey, including targets that promote the social, economic and political inclusion of all, and which call for the elimination of discriminatory laws.

Realising that potential, however, requires a more radical change of approach to the MDGs than is yet contemplated; one that involves systematically targeting the most impoverished communities and tackling ethnic and religious discrimination head on. The first step is to look more closely at which peoples remain left behind and to start listening to them.