Tackling internal displacement through the SDGs

Conflicts, disasters and uneven development force millions of the world’s most vulnerable people from their homes every year. If the 2030 Agenda seeks to leave no one behind, how can it help to solve the complex problem of internal displacement? 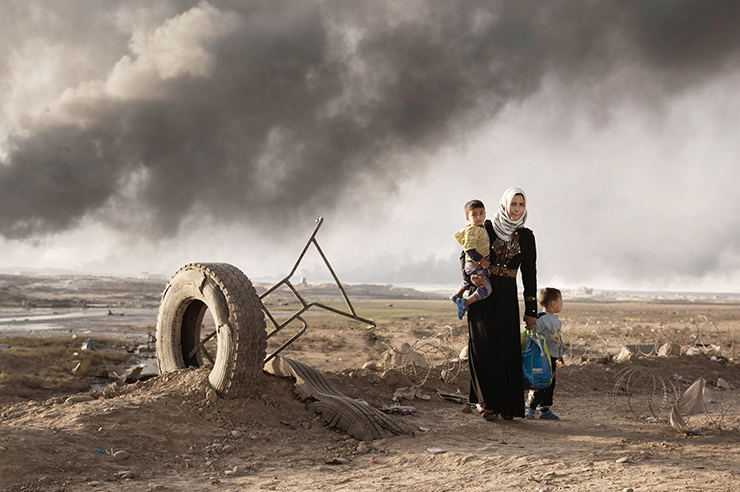 October 2016, a newly displaced woman with her children arrives at a check point south of Mosul, Iraq.
© Romenzi/UNICEF

Tackling internal displacement through the SDGs

Conflicts, disasters and uneven development force millions of the world’s most vulnerable people from their homes every year. If the 2030 Agenda seeks to leave no one behind, how can it help to solve the complex problem of internal displacement?

We are living in what has been called the biggest investment boom in human history. In a quest for global growth, the G20 group of countries, the private sector and international finance institutions are embarking on multi-trillion-dollar investments in infrastructure around  the world.

On top of this, the international community has recently adopted numerous global policy commitments relating to sustainable development. These include the provisions of the Paris Agreement, Sendai Framework, New Urban Agenda and the 2030 Agenda for Sustainable Development, among others.

This infrastructure boom and the development work being carried out to realise these global policy agendas offer a significant opportunity to solve some of the world’s problems. One such problem is internal displacement, which comes about and is prolonged largely because of uneven and limited development.

Over the past eight years, an average of 25.4 million displacements caused by disasters have been recorded every year. The extent of protracted disaster displacement is unknown.

On top of these figures, an estimated 15 million people are displaced every year by development projects and an unknown number are displaced by other causes such as criminal violence and slow-onset disasters. The number of internally displaced people (IDPs) will at a minimum stagnate, if not continue on this upward trend, unless more is done to comprehensively address the causes of displacement and sustainably integrate IDPs. Failing to do so may undermine development gains.

Uneven development is a driver of displacement
Internal displacement is the result of a multitude of overlapping social, economic and political drivers. One driver is poverty. Those who are already among the poor and marginalised are disproportionately impacted by displacement.

In Bangladesh, for example, poor delta communities are repeatedly displaced by recurrent storms and tidal floods. Their livelihoods are eroded as agricultural land becomes infertile due to gradual saltwater intrusion. Further impoverishment is the result. Those who are unable to afford the high cost of relocation and resettlement elsewhere continue to be exposed, while those who are able to move join the urban poor in sprawling informal settlements. Approximately 26 million people are forced into poverty by disasters each year.

Poorly planned and rapid urbanisation is also a driver of displacement risk. It is characterised by the expansion of informal settlements or slums, which are home to  a third of the urban population of developing countries. Crowded and unhealthy living conditions, poor housing standards, insecure tenure status, precarious livelihoods and exposure to hazards concentrate disaster risk.

They also prolong the process of finding solutions for people who become displaced from or within informal settlements, or who are displaced to them for lack of better options. The situation of approximately 46,000 people who remain internally displaced in Haiti’s capital Port-au-Prince since the 2010 earthquake disaster is a case in point.

The current crisis in north-east Nigeria and the wider Lake Chad Basin is also a clear example of how uneven development can eventually lead to, and then render protracted, internal displacement. The original genesis of the militant group Boko Haram, whose insurgency has been reported as a main cause of flight for 97 per cent of the 1.7 million IDPs in Nigeria, has been traced in large part to the frustration of disenfranchised youth denied livelihood opportunities and education.

This marginalisation was exacerbated by increasingly limited access to water and grazing pastures as Lake Chad shrunk by 90 per cent over the last 45 years. The interaction of under-development with these other economic, social, political and environmental drivers have, over time, paved the way for the conflict and violence today forcing millions of people to leave their homes.

Table 1 shows the countries where the highest number of displacements were recorded, an indication of high levels of insecurity and instability.

Conflict and disasters are not the only immediate causes of displacement, however. In Myanmar, for example, displacement is also caused by land dispossession. The current land rush is largely driven by crony companies operating through loopholes in a complex legislative framework that favours the state, the military and their allies.

In stark contrast, dispossessed rural communities face a significant power imbalance and little protection from the state. Despite having the potential to lift the country out of poverty and displacement, the agribusiness and extractive sectors are driving rather than resolving displacement.

How will we know if the SDGs are resolving internal displacement?
The 2030 Agenda promises that work on the Sustainable Development Goals (SDGs) will leave no one behind, and reach people who are the furthest behind first, including IDPs. However, many states do not have the baseline data to show which IDPs are furthest behind, and if they do it is not always up to date.

The Internal Displacement Monitoring Centre (IDMC) was able to obtain updated information in 2015 for nearly 31.7 million of the 40.8 million people who we estimated were living in displacement at the end of the year as a result of conflict and violence.

The age of the most recent data for the remaining 9.1 million IDPs varies widely. IDMC’s Global Report on Internal Displacement in 2016 showed that outdated or decaying data is a problem in 12 of the 53 conflict or violence-affected countries that IDMC reports on, or for 20 per cent of conflict IDPs worldwide.

As a first step, it is important for states to ensure regular collection and analysis of national data on IDPs to identify the most disadvantaged among them, ensure their needs are included in development plans, peacebuilding and risk reduction, and monitor their situation over time.

Monitoring IDPs’ situation across all SDGs will show whether they are overcoming displacement-related vulnerabilities and discrimination. Otherwise, in 2030 there will be no evidence to show that progress has been made towards reaching the needs of the most vulnerable.

Political will, partnerships, capacity-strengthening and funding will be key to ensure consistent and regular IDP data collection and analysis. IDP data collection guidelines are being developed within the Inter-Agency Standing Committee’s Working Group on Information Management to guide states and others on what data to collect on IDPs and how.  Local organisations and NGOs with experience and expertise on this could be enlisted to help governments in their data collection efforts.

Policy coherence
It is crucial during this implementation phase to pay special attention to the coherence of the 2030 Agenda. Special attention is needed to ensure that interventions that support one SDG do not impede progress on another. For example, reforestation projects that aim to mitigate climate change and contribute to realisation of SDG 13 (on climate action) may require displacement of people from their homes and livelihoods.

If the risks of impoverishment and marginalisation are not sufficiently reduced or avoided, this displacement and the resulting poverty and inequality may undermine achievement of SDG 1 (on poverty) and SDG 10 (on inequality).

As states move forward on implementing commitments and measuring progress towards the SDGs, addressing internal displacement can allow progress across many goals in the 2030 Agenda.

Development and poverty reduction efforts that enable people to settle in safer places, build the resilience of their assets  and livelihoods, and increase their ability to cope with shocks, help to avoid displacement and the worst of its impacts, including situations where it becomes protracted and chronic in nature.

Other global policy frameworks with similar or related goals, particularly the Sendai Framework, the Paris Agreement and the New Urban Agenda, should reinforce and contribute to realisation of related SDGs in the 2030 Agenda.

This rare opportunity to align global work on sustainable development needs to be seized.