What can governments do to generate growth that benefits everyone equally? 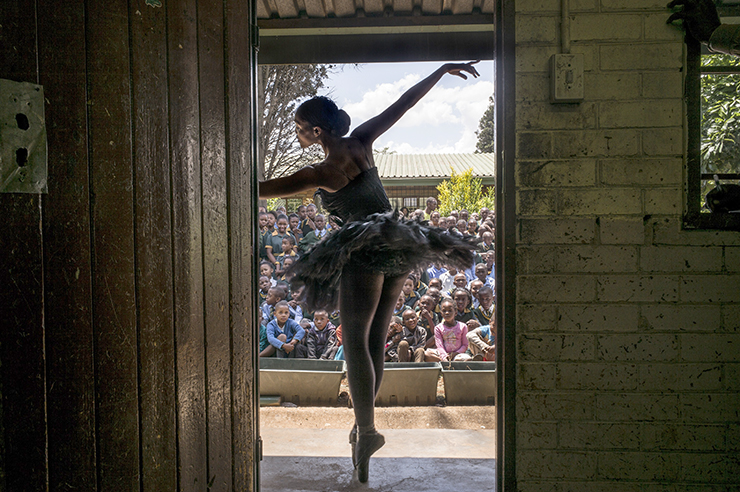 A member of the Joburg Ballet performs at a primary school in Soweto, South Africa, to promote healthy and positive choices. Investing in education is perhaps the most effective way to support equitable growth.
© Marco Longari/AFP/Getty Images

What can governments do to generate growth that benefits everyone equally?

The 2030 Agenda and the Sustainable Development Goals (SDGs) are designed to promote equality and to leave no one behind. To achieve the SDGs, ending poverty must go hand in hand with policies that build economic growth while addressing a wide range of social needs. These include education, health, social protection and jobs.

A recent report by the World Bank Group (WBG) on poverty and shared prosperity concludes that extreme poverty worldwide continues to fall despite the sluggish state of the global economy. And, even though global income inequality is falling, its overall level remains seriously high while income inequality within nations is rising. The report warns that given projected growth trends, reducing high inequality may be a necessary component of reaching the goal of ending extreme poverty by 2030. Stimulating sustained and inclusive economic growth is an important driver to decreasing inequalities.

The WBG recognises that economic growth has many drivers. First and foremost, growth must be inclusive and sustainable. To achieve this, the WBG has identified high-impact strategies, key policies with a proven track record of: increasing poor people’s earnings; improving their access to essential services; and enhancing their long-term development prospects, without diminishing growth. These policies operate best when paired with good macroeconomic management policies that stimulate innovation, promote high levels of savings and investment, allocate resource effectively and allow for well-functioning labour markets that create jobs and enable the poorest to take advantage of those opportunities.

In other words, growth should not only achieve increases in GDP per capita. In combination with improved access to opportunities and services, particularly in education and health, growth should also lead to improvements in income inequality. Investments in human capital and resilience – the ability to recover from global shocks and threats – will protect hard-won development gains, and prevent people from sliding back into poverty.

The fight to end extreme poverty within a generation and implement the 2030 Agenda offers a rare opportunity to generate the right kind of growth that leaves no one behind. The WBG sees the three key drivers as:

The infrastructure sector has the potential to unlock such growth, but in recent years the demand for infrastructure investment has far exceeded available resources. We estimate that emerging markets and low-income countries face an annual gap of up to $1.5 trillion dollars in infrastructure finance. Traditional development aid alone, also known as Official Development Assistance, stands at around $132 billion a year. It therefore cannot finance this demand.

To fill this gap, traditional development finance has to be transformed, to become smarter. We have to create incentives to leverage other sources of finance – private and public, domestic and international. Opportunities for public–private partnerships in emerging markets, especially in infrastructure, could substantially boost global economic growth.

In an era of rapid technological transformation, development practitioners must focus on the appropriate infrastructure needed. The traditional economic path from productive agriculture to light manufacturing and then to large-scale industrialisation is no longer applicable to all developing countries. In Africa, for instance, technology could fundamentally disrupt this traditional pattern and, as a result, necessitate more tailored solutions.

Research based on WBG data estimates that 69 per cent of jobs in India are threatened by technological disruption, 77 per cent in China and 85 per cent in Ethiopia. It is vital to understand the prospective paths to economic growth available for these countries, and to adapt our approach to infrastructure accordingly. If technology leads to fundamental transformations in the kind of jobs available in developing countries, we have to increase our focus on our second major pillar in pursuit of leaving no one behind: investing in people.

Investing in human capital
When many countries face policy decisions on how to invest their limited financial resources, top of their agenda is to prioritise investments in so-called ‘hard infrastructure’ such as roads, ports and utilities. This is understandable and precisely why we have to be successful in increasing resources for infrastructure by including private capital in support of the development agenda.

But without more capital it will be difficult to convince countries to increase their investments in people at the scale necessary to build a workforce that can be competitive in the economy of the future.

In fact, what students learn in classrooms is a strong predictor of economic growth. Over the last 20 years or so, the world has seen, particularly in regions such as East Asia, that investments in people make a huge difference to a country’s ability to grow their economy in an inclusive way. For example, one World Bank study shows that if student learning achievement had been as high over time in Latin America as in East Asia, Latin America could have matched East Asia’s much higher rate of economic growth.

According to WBG data, a quarter of children under the age of five worldwide – 156 million children – are stunted. Stunting leads to an underdeveloped brain, with long-lasting harmful impacts including diminished mental ability and learning capacity and, eventually, reduced earnings. It is a humanitarian disaster and an economic issue that impairs national economies. Effective and early investment in people determines the very future of countries and will make a considerable impact in nations’ ability to grow their economy and decrease inequality.

Governments that invest early in a skilled, healthy, productive workforce are enhancing their current and future inclusive economic growth potential. The cost of falling short in equipping children with foundational skills is unacceptably high, and the evidence supporting this conclusion is more evident every day. In an ever more technologically complex and digital world, governments must recognise that these investments will not just lead to inclusive and sustainable economic growth. They will also, more importantly, establish the social foundations that can act as a safeguard against instability, violence and conflict.

Thus, investments in human capital are just as critical as investments in hard infrastructure. But protecting these investments will require resilience to the global and domestic shocks that can affect and even reverse hard-won prosperity gains.

Foster resilience to global and domestic shocks
We are currently living in a time of multiple overlapping crises necessitating new and innovative ways of dealing with them. Many global risks – including conflicts that persist for decades, ongoing refugee crises, natural disasters and pandemics – have a significant spillover effect and can have global ramifications.

These global issues, which often have direct effects on inequality, disproportionally affect the poor. They also negatively impact progress on the SDGs, creating the need for global solutions.

Currently, 65 million people are displaced. About 21 million of these are refugees, 86 per cent of whom are hosted in developing-country regions. Without support, the displaced face hardship and marginalisation, and put at risk the development progress of host communities. By opening their borders, host communities are providing a global public good, yet often find themselves alone trying to address these challenges of top of their own economic difficulties.

The WBG has developed innovative financial tools to nurture resilience for both the refugees and their host communities. These tools allow finances to follow refugees, instead of using GNI per capita as the sole indicator for eligibility for concessional finance. As a consequence, the Global Concessional Financing Facility (GCFF) was born from a partnership between multilateral banks, the UN and governments. It provides concessional financing for development projects to help middle-income countries address refuges crises.

The GCFF’s initial focus will be on Jordan and Lebanon and their management of an influx of Syrian refugees, filling gaps in the international response to the global refugee crisis and ensuring that sufficient financial resources are available to assist the refugee host communities.

During the September 2016 Leaders’ Summit on Refugees, and using the GCFF as a framework, the WBG announced the establishment of a Global Crisis Response Platform. This will provide, systematic and better-coordinated support for managing crises across a spectrum of risks and vulnerabilities including food security, the environment and health.

Three pillars
For the world to grow sustainably and inclusively, one cannot overlook the interplay between these three key pillars of investing in infrastructure, human capital and resilience. Together, these pillars are imperative to all countries’ development strategies and fundamental to global efforts to achieving both the WBG’s goals and the SDGs.

While economic growth is an important driver to reduce extreme poverty, greater and efficient investments in physical capital such as infrastructure, human capital and resilience should be the focus of economic policy to make such growth sustainable and inclusive.