Sustainable infrastructure for Asia and the Pacific: the new normal

With a rapidly expanding population and high-risk exposure to the effects of climate change, Asia and the Pacific requires a paradigm shift in infrastructure planning if it is to pursue a path of sustainable development 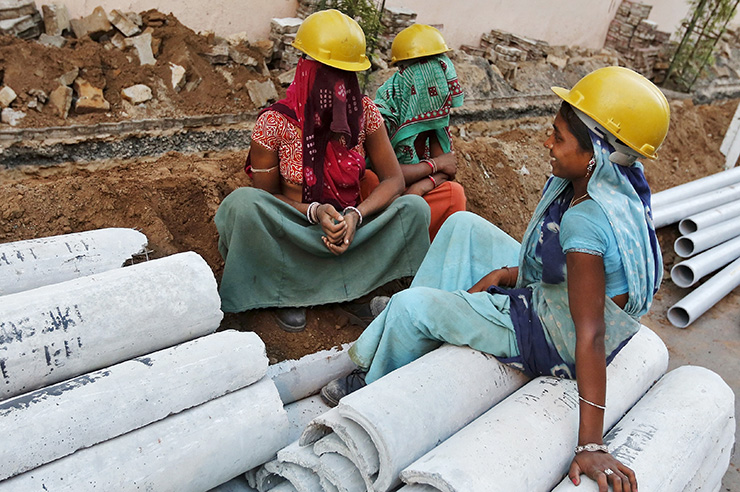 Labourers take a break from laying underground electricity cables in Ahmedabad, India. Over 400 million in Asia and the Pacific lack electricity. © Shailesh Andrade/Reuters

Sustainable infrastructure for Asia and the Pacific: the new normal

With a rapidly expanding population and high-risk exposure to the effects of climate change, Asia and the Pacific requires a paradigm shift in infrastructure planning if it is to pursue a path of sustainable development

The dynamic landscape of Asia and the Pacific poses continued challenges to shared and balanced growth, framing a ‘new normal’ for sustainability.

These challenges are aggravated by weak institutions and capacities, and the diverse needs and priorities of communities working within complex governance systems.

Investments in sustainable and resilient infrastructure – a prerequisite for economic development and sustainable growth – together with e-commerce could be a catalyst for faster and more efficient institutional solutions to help overcome these challenges. Successful investments will require a combination of policy shifts, investment design, financial and technical innovations, and skills-enhancing programmes.

Despite tremendous efforts, the quality of life across Asia and the Pacific remains constrained, due to shortfalls in infrastructure provision and sustainable growth practices. Millions of people still do not have access to basic public infrastructure, with over 400 million lacking access to electricity, roughly 300 million to clean water, and 1.5 billion to basic sanitation.

About 523 million people live in urban slums with poor access to basic services and livelihood opportunities.

In the report, Meeting Asia’s Infrastructure Needs, ADB estimates that developing Asia will need to invest $26 trillion from 2016 to 2030, or $1.7 trillion per year, if the region is to maintain its growth momentum, eradicate poverty, and respond to climate change. This accounts for 5.9 per cent of the projected gross domestic product of developing Asia. Without climate change mitigation and adaptation costs, $22.6 trillion or $1.5 trillion per year will be needed.

Additional investments are required to ensure that public infrastructure delivers intended benefits under the likely impacts of climate change. These impacts have already caused annual losses of $73 billion on average to infrastructure and other assets in the region over the past 10 years.1 Development banks will play an important role in financing this infrastructure.

Such changes adversely impact human health and wellbeing, and disproportionately affect the poor. The performance of vital public infrastructure is also endangered. Irrigation and drainage investments are forced to cope with increased rainfall variations and freshwater scarcity.

Much of the global population and many major urban areas exposed to sea-level rise are found in Asia and the Pacific. Sea-level rise and associated storm surges, coastal flooding, salinity intrusion and aquifer contamination are of particular concern. These adversely affect the development of coastal cities in the region. New studies2 indicate that sea-level rise might greatly exceed IPCC estimates – possibly rising by up to two metres by the end of the century.

Many of the region’s cities, including Shanghai, Dhaka, Calcutta, Jakarta and Hanoi, are highly exposed and vulnerable to changes of such magnitude. In these and other cities, nearly 100 million people would be directly affected due to the absence of major investments in protective infrastructure or – as an alternative – relocation.3 And these are global average figures. Sea-level rise in specific locations will also reflect, for example, land subsidence from groundwater over-pumping, as is occurring in Bangkok, Beijing and Jakarta, among others.

Building increased resilience into infrastructure upfront at the design stage is less costly than seeking to add it at a later stage. ADB, along with other multilateral development banks, now monitors and reports the level of adaptation finance in its investments. Since 2011, adaptation has represented around five per cent of ADB’s total portfolio value.4 As knowledge and experience are gained and lower-cost solutions are identified, the additional finance required to climate-proof investment may decrease. However, this needs to be supplemented by additional infrastructure to meet the growing demand from rapid economic development and urbanisation in the region.

ADB has discovered that rather than continuing to expand coal-fired power generation, the optimal pathway to the Paris Agreement’s overarching goal of limiting global temperature rise implies that nearly all new Asian power expansion should come from low-carbon sources such as wind, solar, biomass and gas with carbon capture and storage (CCS).

This also means that energy efficiency needs to be accelerated to help reduce energy consumption by nearly 40 per cent by 2050 relative to business as usual. Over the 2016 to 2030 period, estimated infrastructure investments taking into consideration climate-related variables in the power sector are $14.7 trillion, including annual mitigation investment requirements of $200 billion per year.5

An important impetus to addressing the challenge of the ‘new normal’ and the risks of climate change is provided by recent transformational global developments.

Achieving these objectives requires paradigm shifts in infrastructure planning and design. Citizens’ demands for infrastructure have increased exponentially, often exceeding the carrying capacities of ecosystems for urban and rural populations.

However, providing more infrastructure alone will not suffice. Prioritising the needs of people within financial and natural resource limitations is a bigger challenge. Economic and social development can be enhanced through comprehensive planning across sectors, efficient resource use and collaborative decision-making. All these need to be translated into a systematic institutional and policy approach for integrated development to improve quality of life as outlined by the SDGs.

Finally, the provision of well-planned infrastructure that balances the principles of the environment, economy and equity with consensus-based decision-making processes may affect co-benefits for communities. These would guide development toward inclusive, resilient and sustainable pathways. I hope, one day, to see these as institutional solutions to the new normal.