Sustainable development and healthy populations go hand in hand. But with patient demand ever increasing, how can countries across the development spectrum ensure their health systems can deliver healthcare for all? 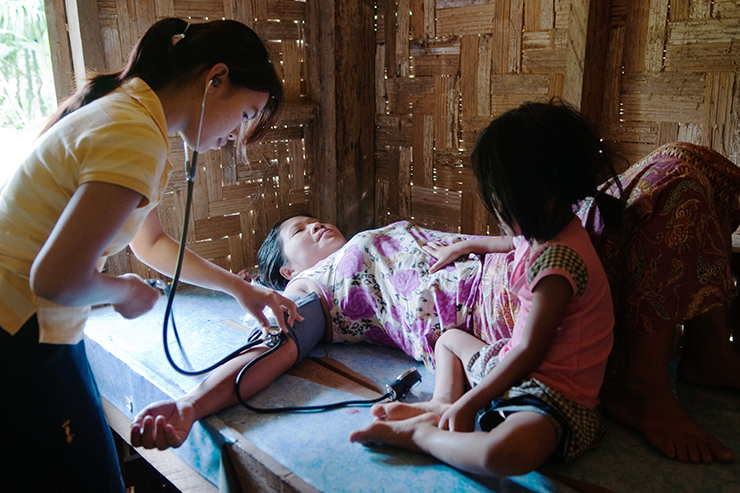 A nurse examines a woman in a Mon village clinic, Burma. A trained health professional attending childbirth is directly correlated to maternal survival rates. Maternal mortality is highest in sub-Saharan Africa where only 59 per cent of births are attended. The global average is almost 80 per cent. © Thierry Falise/LightRocket via Getty Images

Sustainable development and healthy populations go hand in hand. But with patient demand ever increasing, how can countries across the development spectrum ensure their health systems can deliver healthcare for all?

In the four years since the Sustainable Development Goals asserted that health coverage should be universal, the global health landscape has been transformed. Around the world, many health systems are undergoing intensive reforms in the journey towards achieving universal health coverage (UHC). The World Health Organization (WHO) has defined UHC as all people having access to the health services they need, without fear of being subjected to financial hardship. Research by the World Bank has also demonstrated that investing in healthy populations can lead to economic growth – and that this requires adequate financing in strengthening health systems.

Why do health systems matter?
It is estimated that high-quality health systems could save over eight million lives each year in low- and middle-income countries (LMICs). These are people that are dying from conditions that could be prevented or treated. Health systems with higher public spending on health also tend to provide better financial protection for users. Generally, the greater the level of government spending on health, the lower the percentage of out-of-pocket payments by users, and the lower the proportion of households facing catastrophic health expenditures (spending more than 10 per cent of their household budget on health).

In 2010, more than 800 million people – over 10 per cent of the world’s population – incurred catastrophic health expenditures. Furthermore, user fees deter use of services, especially among the poor, causing millions to forgo needed healthcare. The health sector is an important source of economic growth – good health is not just a consequence of economic development, but can also help to be a driver of it. Investing in health generates employment, increases productivity and innovation, and fosters stability by protecting countries from the economic and social impacts of diseases. Notwithstanding the ethical imperative to provide equal access to high-quality health services around the world, achieving UHC can help to promote economic growth.

How are health systems financed?
Global spending on health has changed significantly in the past two decades, with a general trend towards increased domestic public financing and a decline in external financing. In 2016, the world spent approximately $7.5 trillion on health, representing close to 10 per cent of global GDP. However, significant disparities remain in the way health systems are funded across the globe.

There are four major health financing models. The first is taxation, upon which the UK’s National Health Service model (the Beveridge model) relies. It is a tax-funded system, reliant on mandatory pre-payment mechanisms (general taxes) to provide services to the entire population.

The second is social health insurance, which forms the basis of Germany’s Bismarck model. This relies on household premiums and payroll taxes to provide services to those enrolled.

The third is private health insurance, whereby individuals take out healthcare insurance policies from private organisations. This model is used in the United States and Switzerland, among others.

Fourth, user fees (out-of-pocket payments) can form a large share of healthcare financing in developing countries. In India, for example, user charges account for more than 70 per cent of total health expenditure.

The WHO has estimated that 85 per cent of the cost of meeting the SDG health targets in LMICs can be met with domestic resources. However, if further progress is to be made towards UHC, governments must maximise the resources they make available for health. Mandatory pre-payment mechanisms form a strong core of domestic healthcare financing.

However, these are often based on taxes, which can be difficult to collect in low-income countries with large informal sectors. Furthermore, targets aimed at increasing the share of government spending on health – such as the Abuja target for African governments to allocate at least 15 per cent of government resources to health – can result in reallocation of resources between sectors at the expense of other important social services. In countries where all sectors are under-financed, this is not a sustainable option.

For countries that cannot achieve UHC – even using all their available resources – external international support should be provided. But, as Mcintyre, Meheus & Røttingen have argued, care must be taken to ensure that these funds are provided in addition to, rather than in place of, domestic government funding for health.

Future key risks
There are a number of challenges facing healthcare systems. In the past decade, urban centres have become the dominant habitat for humankind. It is estimated that by 2030, almost five billion people will live in urban areas. Furthermore, the proportion of people aged 60 and over continues to increase. The combination of urbanisation and ageing populations has led to a shift towards chronic and non-communicable diseases – such as diabetes, cardiovascular disease and cancer – as increasing causes of death. This must be reflected in the global health agenda, which still includes a strong focus on communicable diseases.

The growing phenomenon of antimicrobial resistance represents a formidable threat to human health and the ability to respond to infectious diseases. Deaths from drug-resistant infections are projected to reach 10 million annually worldwide by 2050. Population displacement also creates a host of challenges to social, political and health systems. UNHCR estimated the refugee population to have reached unprecedented levels at 21.3 million refugees worldwide in 2015. Such substantial levels of displacement have placed considerable strain on health services around the world, particularly in countries receiving large numbers of refugees.

Finally, climate change poses a significant threat to population health, both directly and indirectly. Consequences of climate change include: food insecurity and poor nutrition due to decreased crop yields; increased infectious disease outbreaks and the resurgence of vector-borne diseases following extreme weather patterns and displacement; and increased morbidity and mortality from heatwaves and exposure to holes in the ozone layer.

Working towards resilient health systems
In conclusion, adequate funding of health systems can result in better health outcomes, financial protection from bankruptcy, and general economic growth. As countries move towards UHC, there is increased focus towards domestic finances to fund health systems, and away from less sustainable options such as external aid.

It is therefore crucial that countries develop resilient health systems. A resilient health system is one that is able to prepare for and effectively respond to crises; maintain its core functions when a crisis hits; be informed by lessons learned during a crisis; and reorganise if necessary. Health systems should not only transform to improve during times of crisis, but also continually evolve in normal times to build long-term resilience. To do so, health systems must partner with non-health sectors (such as education and agriculture), the private sector, non-governmental organisations, civil society and communities to provide an integrated vision of quality healthcare. Providing access to health services is not enough. To improve outcomes, health systems must ensure that good quality of care remains at their core.