COVID-19 has cruelly exposed the weaknesses in nations’ social protection systems. We must urgently learn from this crisis to better protect people, both from the pandemic fallout and from future crises 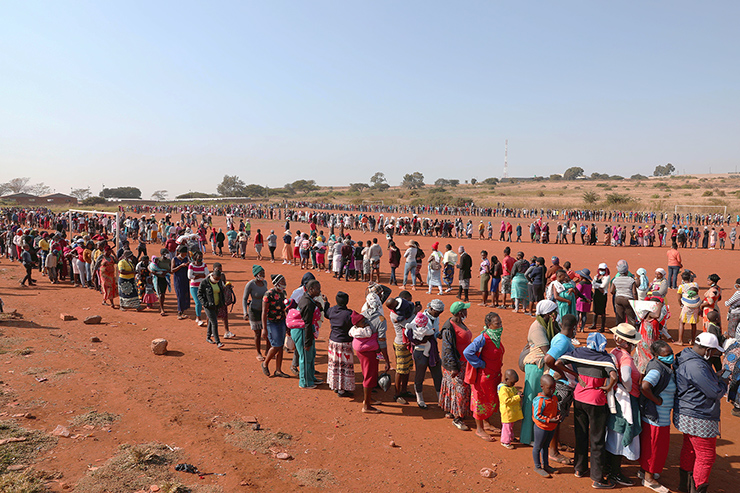 People queue to receive food aid at the Itireleng informal settlement, Pretoria, South Africa. The lockdown to curb the spread of COVID-19 in the country created an upsurge in the numbers experiencing hunger. © Siphiwe Sibeko/Reuters/Alamy Stock Photo

COVID-19 has cruelly exposed the weaknesses in nations’ social protection systems. We must urgently learn from this crisis to better protect people, both from the pandemic fallout and from future crises

The COVID-19 pandemic started as a major public health challenge, but quickly morphed into a protracted socio-economic crisis with which countries are still grappling. According to the ILO’s latest global estimates, employment has declined significantly, as measured by a 17.3 per cent reduction in working hours for the third quarter of 2020 compared with the last quarter of 2019. This is equivalent to 495 million full-time jobs. In 2020 alone, up to 100 million people may be pushed into extreme poverty, reversing progress towards the Sustainable Development Goals. The World Food Programme has warned that heightened food insecurity will affect millions more people in low and middle-income countries.

Social protection systems have been the first line of defence against the negative impacts of the crisis on people’s health, livelihoods and incomes. Most states have taken measures to facilitate effective access to healthcare, while supporting job and income security for those most affected, though many of the measures have been temporary. In terms of domestic efforts, as of 3 September 2020, more than 196 countries have introduced expansionary fiscal measures, totalling approximately $10.6 trillion (if we include social protection, healthcare and other measures). However, most of these fiscal resources have been concentrated in high-income countries, creating a ‘stimulus gap’. Indeed, we are likely to emerge from this crisis even more unequal than we entered it.

The effects of the pandemic have also been highly uneven within countries, reinforcing existing inequalities and social cleavages. Those who are better off are more likely to have secure employment and savings to draw on, access to social protection and health coverage. They are also better able to quarantine or socially distance themselves while continuing to work remotely.

The relative decline in employment has been greater for women than for men because they have been disproportionately employed in sectors hardest hit by the shutdowns, and are over-represented in front-line jobs, which are at greatest risk of exposure to coronavirus. With the closure or disruption of schools, childcare centres and long-term care institutions, unpaid care responsibilities have intensified to a greater extent for women than for men.

Depending on their contracts, migrants may be among the first to lose their jobs, and face significant barriers to re-entering the workforce. They also face multiple hurdles in accessing social protection, due to the informality of their labour situation, or lack of citizenship or legal residency.

How should policy respond?
While the pandemic is still with us, and the evidence of its impacts are insufficiently conclusive to allow proper cross-country evaluations, efforts to contain its socio-economic impacts have varied considerably across countries. Based on emerging evidence, we can say that the hallmarks of good policy response comprise five core elements.

First, policy interventions must be commensurate with the magnitude of the labour market disruptions they seek to attenuate. In high-income countries, the announced fiscal stimulus measures equate to 10.1 per cent of total working hours, while estimated working-hour losses averaged 9.4 per cent. These measures were large enough to offset most of the contraction. In low-income countries, by contrast, the stimulus is equivalent to only 1.2 per cent of total working hours, while working-hour losses averaged 9 per cent. This underlines the significance of fiscal capacity and the imperative of mobilising resources from diverse sources.

While domestic resource mobilisation will inevitably be the cornerstone of national social protection systems, for low-income countries international support is critical. It is imperative that countries sustain their levels of social spending when the immediate health crisis subsides, to ensure that people are protected against adverse economic and social consequences and to counter the danger of growing poverty, joblessness and exclusion.

Third, the nature of social protection systems already in place also makes a big difference. Social protection systems have been more effective if they provide universal, or close to universal, coverage and adequate benefit levels that prevent poverty, and deliver comprehensive provision covering all life-cycle risks. The crisis has laid bare some of the major gaps in social protection systems. For example, nearly 40 per cent of the world’s population has no health insurance or access to national health services. Figures from the World Health Organization and World Bank suggest some 800 million people spend at least 10 per cent of their household budget on healthcare each year, and 100 million people fall into poverty because of medical expenses. This means that many simply lack the wherewithal to seek treatment when they are sick, including from COVID-19.

Compounding the problem, an overwhelming majority of workers lack the income security to take sick leave. With less than two thirds of all countries having a social insurance or social assistance scheme in place providing sickness benefits, the ill are often forced to choose between endangering personal and public health and paying their bills.

Unemployment protection is also severely inadequate, despite its critical role in supporting household incomes and stabilising aggregate demand. While close to 500 million full-time equivalent jobs have been imperilled, only one in five unemployed people worldwide can count on unemployment benefits.

The fourth element of a good policy response must be to address the dissonance between social protection systems and the labour market, which otherwise dampens policy responsiveness. The lack of social protection for the two billion informal economy workers – 61.2 per cent of the world’s labour force – and their families makes them particularly vulnerable to shocks. Invariably, they cannot count on social insurance protection, nor are they well served by narrow social assistance schemes.

In the context of COVID-19, some countries, such as Germany and the UK, have extended sickness benefits and unemployment protection to previously excluded workers. A pre-COVID example of promising practice, where labour market and social protection policy cohere, is the recent extension of contributory mechanisms to workers in the informal economy, as seen in Argentina, Brazil and Uruguay, which can carry a triple dividend: contributing to formalisation, broadening the tax base, and liberating resources
from social assistance.

Fifth, even where countries have social protection systems with high legal coverage, adequate and comprehensive provision can fail to reach their intended beneficiaries if delivery systems are weak and entitlements are not easy to access. To ensure high take-up of benefits it is critical that procedures are simplified, benefit information is widely available (in different languages) and uptake is not hampered by onerous eligibility requirements.

One salutary outcome of the crisis has been the temporary removal of cumbersome and punitive behavioural conditionalities frequently attached to family-oriented cash transfers targeted to women in low-income households. These conditional cash transfers have been widely promoted over the past two decades as a means of reducing poverty in households with children. As research shows, conditionalities can have detrimental consequences where quality public services are absent. Programme requirements (for example, children having regular health checks) can easily slip into coercive practices and obstacles that women from marginalised communities must overcome to access the benefits.

Moving forward
The state of the world today gives us a glimpse of the social and economic disruptions that are likely to ensue as the ongoing climate crisis wreaks havoc on people and planet. The pandemic has served as a much-needed reality check, alerting us to our unpreparedness to respond to such systemic shocks in a just and equitable way.

To move forward, not only do countries need to mobilise more resources to invest in social protection systems, they also need to invest better. This means investing in systems that:

Much more remains to be done to streamline the policy frameworks of the UN system and the international financial institutions with internationally agreed human rights principles, especially when it comes to fiscal policies, so that they accommodate, rather than undermine, much-needed investments in universal social protection.

Today we stand at a crossroads. We can turn the COVID-19 crisis into an opportunity to build robust social protection systems. Or we can stumble zombie-like through this crisis and leave ourselves exposed and unprepared for future shocks.