Does development cooperation between countries of the Global South offer a paradigm shift from the traditional North-South model, or just more of the same? 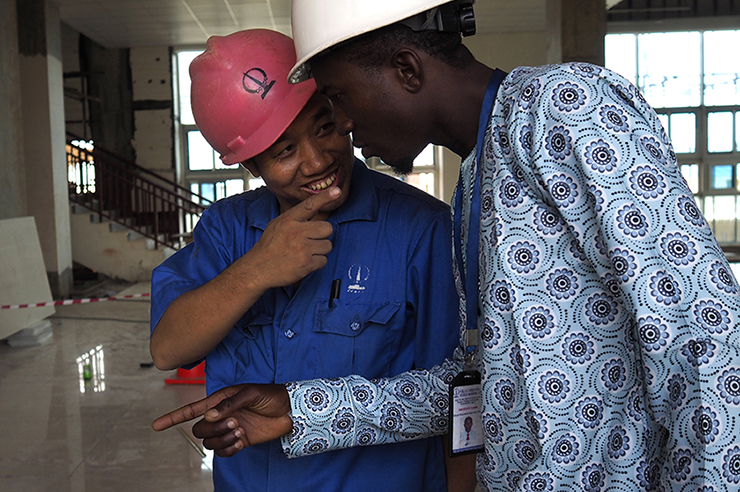 Chinese and Nigerian workers on the construction of the new light railway in Lagos, Nigeria. The high-capacity rail system is being built by China’s state-owned China Civil Engineering Construction Corporation  © Reuters/Joe Penney

Does development cooperation between countries of the Global South offer a paradigm shift from the traditional North-South model, or just more of the same?

In the past several years, the concept of South-South development cooperation (SSC) has gained momentum. Seen as a possible alternative to the North-South framework, SSC has provoked a considerable set of commentaries that coalesce around the viewpoint that SSC can correct the imbalances of the international development cooperation landscape.

The notion of SSC is based on the Global South’s marginalisation from global development processes and international markets, while eschewing the experiences of imperial and colonial exploitation. In this regard the idea of SSC is defined by the Bandung principles of mutual interest, peaceful co-existence, respect for national sovereignty, non-interference in internal affairs, equality among developing partners, and respect for national independence, cultural diversity, identity and local content.

Theoretically, the simple yet powerful message from SSC focuses on the foundation of solidarity and shared historical experiences. This is supposedly manifested in practice by not repeating the same mistakes as former colonial empires and the dominant North.

But is SSC really a departure from past practices of development cooperation? Does the constellation of states that comprise the Global South represent new forms or patterns of development engagement? Are these new development actors articulating a substantial theory of change to the rules-based system of the global development architecture? Or is the rise of the Global South an extension of an existing configuration of North-South relations – a case, perhaps, of new wine in old bottles?

Based on these questions and other compelling issues, this commentary seeks to defragment the contours of SSC. Rather than trying to provide a justification for why SSC is better than North–South engagements, it seeks to review the extent to which SSC differs in its framework and substance – especially in respect of whether it constitutes an alternative model of development cooperation.

The latter is significant when considering that 2015 had been identified as the year for setting the global development agenda, with major international gatherings such as the Global Review of Aid for Trade, the International Conference on Financing for Development, the UN Sustainable Development Summit, the UN Conference on Climate Change and the World Trade Organization Ministerial Conference.

Distinguishing SSC?
As a starting point it should be emphasised that SSC is not a new phenomenon of the 21st century. Political, economic, social and cultural interactions between and among state actors in the region that we today identify as the Global South have been taking place for hundreds of years.

Take, for example, China’s ‘Silk Road’ initiative under President Xi Jinping. Described as a major development framework, the ‘One Belt, One Road’ policy strategy is seen as a revival of China’s empire and sphere of influence dating back to the Han and Tang dynasties. Driven by Beijing’s current policy of economic diplomacy, the programme is considered to become larger than the US-led Marshall Plan for post-war reconstruction of Europe.

In a similar vein, the renewal of ties with Africa – whether through the Forum on China-Africa Cooperation or the India-Africa Forum Summit – also signifies the strengthening of relations with African states that were disrupted by the politics of colonialism and the Cold War.

But the engagement is more than just re-establishing relationships and networks. It is informed by the Bandung consensus – the idea being that the Global South understands its development challenges more coherently and succinctly because of shared historical burdens of underdevelopment. And so by implication, the notion of development becomes one that is by the South, for the South and of the South.

From the above, the appeal of SSC is that it seeks to articulate that the Global South is different from the Global North as it promotes engagement embodied by symmetry, mutual respect, non-interference and common burdens of exploitation. In short, SSC has become synonymous with the construct of win-win partnerships.

Yet trying to differentiate SSC from other forms of development assistance also demonstrates that while the rise of the Global South is identified as opening a new global framework for development, in many respects, things may remain much the same.

SSC: a win-win partnership?
The idea that SSC represents a strategic brand of win-win partnerships is rooted in the context of aid effectiveness. In this regard, the opinion is that SSC can offer a paradigm shift to how global development assistance is disbursed.

This is in part a reaction to the ongoing narrative that aid has done little to alleviate poverty or improve livelihoods in recipient countries. It is what Dambisa Moyo, in her seminal book on development assistance, referred to as ‘Dead Aid’.

So is SSC a win-win partnership? So far, both state and non-state actors have argued that SSC can provide the basis for enabling conditions around mutual accountability and ownership that are often absent in the current development aid architecture. This is borne out of the belief that SSC encapsulates a like-mindedness of thinking around development processes and practices. Both China and India are seen in this context. As much as these two Asian giants are large, developing countries, they have also graduated into the ranks of middle-income status. Each provides what it considers as a veritable amount of development assistance to countries in its regional neighbourhood and beyond (for example, to Africa). These contributions can be seen as having benefits for recipient countries while underlining the donors’ self-interest. The emergence of the new actors from the Global South should therefore not be overstated.

In fact, like their counterparts from the Global North, these countries are aspiring to define their role and identity in global politics. It becomes clear that they adopt a starting point of difference in how they disburse their brand of development assistance under the banner of SSC.

Consider, for instance, the disbursement of lines of credit by Beijing and New Delhi to Africa. For both countries, lines of credit form a critical component of their development assistance packages. They are seen as supporting significant projects that are identified by the recipient as an enabler for their economic development.

Once a project has been through a feasibility study and satisfied the criteria for funding, the recipient country will announce the tender(s) for the project. Theoretically, the tender process should be an open call that allows all vendors to apply. But often it is either explicitly or implicitly geared towards awarding Chinese and Indian companies contracts to carry out the projects, as well as based on sourcing equipment and materials from such firms to implement the project.

This is no different from how Northern projects are also executed. And why should it be? The idea that there is an exceptionalism of countries from the Global South is a misnomer and such thinking fuels parochial perceptions that SSC should be different.

The bottom line is that in spite of the principles of win-win partnerships and rhetoric of mutual benefits and equity, some countries in the Global South are more equal than others. This characterisation can also be applied to the Global North.

Complementing the SDGs
With the Sustainable Development Goals (SDGs) informing the global development agenda for the next 15 years, the question is: what role will SSC play? Unlike the process of the Millennium Development Goals, the negotiations around the SDGs were inclusive, with countries from the Global South playing a significant role in the discussions. To this end, South-South partnerships can complement the SDG outcomes in terms of how they shape the global architecture around the definition of inclusive development.

The fact that southern partnerships are anchored around the contours of shared historical experiences of development is limiting. SSC and partnerships remain vulnerable to the very nature of the international system in which they are supposedly trying to claim a space. In this regard, one of the more important issues that SSC needs to address is whether it seeks to do development differently and how it will influence the global development architecture. This is the opportunity for SSC and partnerships to enhance their positive impact on the implementation of the SDGs.