In the aftermath of COVID-19 what was once radical now seems like common sense. But in the absence of global consensus how can this new understanding translate into the “Decade of Action” we need? 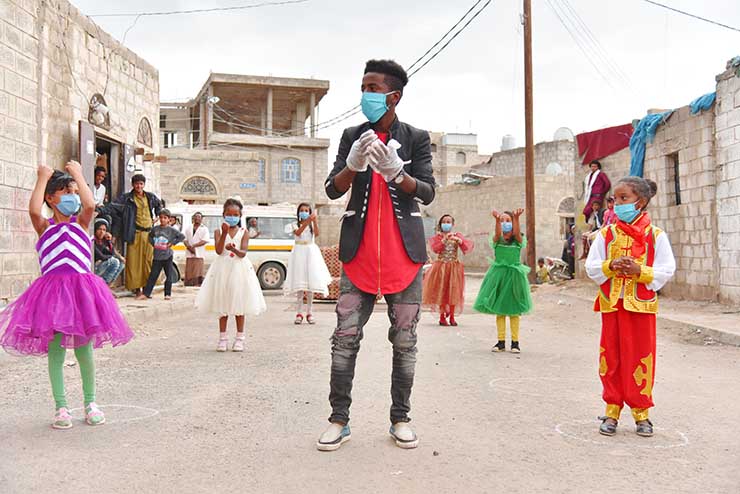 Sana’a, Yemen, a volunteer demonstrates how to wash hands to protect against the coronavirus. © Dhia Al-Adimi/UNICEF

In the aftermath of COVID-19 what was once radical now seems like common sense. But in the absence of global consensus how can this new understanding translate into the “Decade of Action” we need?

A little over 75 years ago, World War II, a crisis unlike any that had come before, had not yet ended but it was clear that it would end. “Determined to save succeeding generations” from a third world war, governments – with the major powers in the lead, but a surprising number of “we the peoples” in the room – forged the United Nations and the global system that defines our world to this day.

We are currently living through a crisis unlike any we have seen since then. While the death toll is, thankfully, not as high as the Great Chinese Famine, the Second Congo War, or the Sahel drought, the global scale of the pandemic (only a handful of Pacific islands and North Korea have thus far reported no cases) and its implications for nearly every aspect of the way almost every community lives its lives make it an unmatched global moment. It is far from over, but, just as 75 years ago, we must prepare for what comes in its wake.

As with World War II, devastation on this global scale cannot be allowed to happen again. And just as World War II revealed fundamental flaws within our global system – notably empire – that could not survive into the second half of the 20th century, so too the COVID-19 crisis is revealing fundamental truths about our current way of life – iniquities and limitations we cannot take into the mid-21st century. Hence the call to ‘build back better’ – a phrase first popularised in the United Nations Sendai Framework for Disaster Risk Reduction in 2015, and now ubiquitous.

Yet while it is clear that the way things were is dying, what will come next has still not yet emerged. The challenge for our world leaders is to proceed as rapidly as possible through the unhealthy interregnum humanity now finds itself in.

Unfortunately, while World War II created a moment of political unity through which the world could be reshaped, COVID-19 has thus far only exacerbated division. Squabbling between major powers meant that it was over three months before the UN Security Council could even discuss the pandemic. The adoption of a political declaration by Member States on the occasion of the UN’s 75th anniversary was likewise delayed by power games over wording, with the ultimate consequence that phrasing related to climate change was watered down. While the eventual text did contain a compelling analysis of the problems our world faces and a renewed political commitment to global cooperation in response, it wisely delegated the task of articulating a vision for the world’s future to the UN Secretary-General. He will now report back by September 2021 with recommendations.

If recent speeches, notably on Nelson Mandela Day, are any indication, the Secretary-General has a fairly clear idea of what the content of that vision will be. A green new deal, with its commitment to a just transition to a carbon neutral economy, and a new social contract at the heart of which is a commitment to leave no one behind; to tackle inequality and ensure that the global system delivers for those that currently feel alienated from it.

Once upon a time, that agenda, and its corollaries (that the long-term general health of a society is more important than the short-term accumulation of value – of growth for its own sake, that we are all interconnected and interdependent, and that the well-being of all is therefore dependent upon the well-being of the most precarious) would have been radical. Now it feels like common sense: the only possible means of dispersing the miasmas, be they pathogens or greenhouse gases, that shroud our planet. It is also the only possible means of delivering the UN’s promised ‘Decade of Action’ to implement the Sustainable Development Goals (SDGs).

But if this quiet revolution in thinking has brought a new and broadly hegemonic understanding of the ‘what’ that is required, one that is codified in the goals, there is less clarity on the ‘how’.

It is here that I believe this publication can make its most useful contribution. Inside is a veritable toolkit for those wishing to build back better. We have policy analyses on what that means for all 17 of the SDGs and how they interconnect as well as think pieces on the future of aid, work, the city, transport, and the economy. We also consider how the impacts will be disproportionately felt by the elderly, women, and marginalised communities – particularly the Black Lives that so often only seem to Matter when activists force policy makers to recognise that they must.

A broad array of practitioners should find this useful, because as Goal 17 makes clear, the SDGs can only be delivered through a whole-of-society endeavour. The SDGs represent an agenda for the world, not just for the United Nations.

Indeed, the actual agency of the United Nations is fairly limited. There’s a possibly apocryphal quote which has been attributed to various Governors of the Bank of England (not Mark Carney, whose thoughtful essay on the credit crisis appears on page 18) that compares that role to being notionally the driver of a car when in reality the only thing you have a hold on is the handbrake; all the other controls being in the hands of different members of a gaggle of querulous, uncommunicative and highly strung boy racers.

If that analogy holds for the British economy, it is even more true for the role of the UN Secretary-General in steering the course of our global agenda, although the controls in his hands are more akin to the turning signals. Too often he can do little more than indicate furiously as the political forces that drive our society once again miss the correct turn-off to a better world.

But if such thoughts create grounds for pessimism, we can find optimism in the willingness of so many – as demonstrated by the UN’s global survey – to effect change, and in the lessons history teaches. Because the fact that many of the correct turns were taken in 1945 was in a large part due to the passengers of our global vehicle – representatives of civil society, representatives of the Global South, a small but influential number of women – who made themselves heard and imparted a sense of direction upon the political forces of the day.

The political settlement of 1945 certainly had a large amount of institutional privilege wired into it from its inception – notably the veto power of the five victors of World War II over any coercive action – but it also gave an unprecedented platform to those previously excluded from the corridors of power. A similar step-change in who is listened to is required now: to provide developing states with the same amplification as the developed, civil society the same platform as states, and the unorganised and the marginalised the same opportunities as those who are represented by established institutions. It’s time to listen to the backseat drivers – they have the map.

The UN’s Agenda 2030 gives us 10 more years to create a sustainable world which not only remedies the flaws in our current society but is resilient enough to survive the challenges that will come in the mid-21st century; chief among them is the changing climate – a crisis the scale of which will dwarf COVID-19 and everything that came before it. The goals show us what needs to be done, and I hope this publication can provide insight as to how. Now our Decade of Action must begin.