The African Union played a key role in drafting the SDGs. It has now integrated global and African priorities into a single agenda that will help the continent to navigate challenges such as food security and resource mobilisation 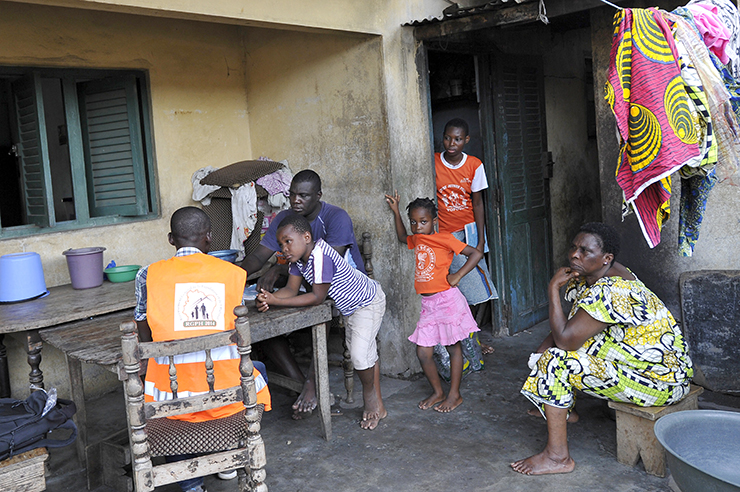 A census survey in Abidjan, Ivory Coast. Improving data-gathering capability is a major priority in Africa  – at present, six out of every 10 SDG indicators can not be tracked. © Sia Kambou/AFP/Getty Images

The African Union played a key role in drafting the SDGs. It has now integrated global and African priorities into a single agenda that will help the continent to navigate challenges such as food security and resource mobilisation

Today the world is faced with many daunting challenges: climate change, migration, food and water security, economic inequality, terrorism – to name just some. While these problems are experienced locally, they cannot be addressed successfully without collective action and international coordination.

In 2015, we witnessed a monumental period in global governance with the adoption of the Sustainable Development Goals (SDGs). The goals are a broad framework, which acts as the Post-2015 Development Agenda. This framework forms a launch pad for global action to promote shared prosperity and wellbeing for the next 15 years.

The SDGs encompass the political will of the global community to come together and critically think about problems shared by all humanity. These issues cannot be solved by states alone, but require cooperation and partnerships that involve multiple actors and that transcend borders. Germany’s Chancellor Merkel reiterated the importance of the SDGs by stating: “We want to change our world, and we can.” The SDGs are a recognition of the interdependence of the global community and therefore the need for collective actions.

Two interrelated agendas
Africa, led by the African Union (AU) policymaking processes, played a critical role and strongly influenced the development of Agenda 2030 and the SDGs. The Union’s Common African Position (CAP) on the Post-2015 Development Agenda, adopted by the AU Summit in 2014, formed a foundation for the Global Goals. Indeed, Africa was the only region to submit a well-articulated position in writing. Under the auspices of the AU, Member States participated fully in the development of the CAP. This, in turn, influenced the work of the Open Working Group and intergovernmental negotiating groups on the SDGs.

The AU’s priorities have been articulated and contained in Agenda 2063. This is a strategic framework for the socio-economic transformation of the continent over the next 50 years. Agenda 2063 is a Member State-driven developmental framework with seven aspirations, 20 goals and 39 priority areas.

The 17 SDGs are all captured in, and fit neatly into, the 20 goals of Agenda 2063, which is somewhat broader in scope than the SDGs. Agenda 2063 covers social, economic and sustainability considerations, as well as political, cultural and other African priorities. Therefore, by implementing Agenda 2063, AU Member States will also be meeting global obligations under the SDGs. The priorities of Agenda 2030 are well aligned with Africa’s development priorities.

The multilateral system is increasingly structuring the implementation of global processes through partnerships. These partners range from multinational corporations and non-governmental organisations (NGOs) to policy networks. Africa is a fertile ground for such partnerships. While NGOs and experts from western countries have for a long time been present in Africa’s development landscape, multinational corporations closely associated with the market are now also playing a key role.

The development of coalitions of public and private actors is often seen as a beneficial process. However, it is also a social practice through which development acquires a particular meaning – sometimes seen as negative.

For instance, over the last decade several stakeholders have been involved in the implementation of the Comprehensive Africa Agricultural Development Programme. While most of the interventions have had a positive effect in Africa’s agriculture and food security, some have also disenfranchised local communities through land grabbing. Others have marginalised the voice of the local experts in setting what are considered as priority areas for action. The practice of partnerships should focus on achieving development goals, rather than being an expression of power relations.

SDG implementation in Africa
The SDGs and Africa’s Agenda 2063, as well as existing frameworks such as NEPAD, have provided the necessary guiding frameworks to support the strengthening of partnerships. They have also helped to mobilise resources towards a coherent implementation of national and regional priorities.

In the wake of the adoption of the Global Goals, the AU prompted the Specialized Technical Committee (STC) on Finance, Monetary Affairs, Economic Planning and Integration to pursue a coherent approach towards implementation, monitoring and evaluation of Agenda 2063 and the SDGs. The STC encouraged Member States to undertake: i) a joint domestication of the frameworks; ii) a single accountability instrument, catering for both agendas at the same time; and iii) a single periodic performance report.

African countries and institutions are currently working closely towards developing a coherent and integrated monitoring and evaluation framework. This will be used to report on both Agenda 2063 and the SDGs at the continental level.

Tracking progress
Africa made some encouraging progress in the implementation of the Millennium Development Goals (MDGs). According to the 2015 MDGs report on Africa, the continent witnessed sustained economic growth, averaging five per cent a year since the start of the century. The report noted that Africa had also established ambitious social safety nets and designed policies for boosting education and tackling HIV and other diseases.

However, the MDGs were hampered by poor implementation mechanisms and over-reliance on development aid. This affected the economic sustainability of several MDG interventions.

The 2017 Africa Sustainable Development Report, jointly produced by UN institutions, the AU and the African Development Bank, tracks progress on both Agenda 2063 and the SDGs. It indicates that slow progress had been made in reducing poverty, despite sustained growth over the last decade.

The report also notes that approximately 217 million people were undernourished between 2014 and 2016, six per cent more than during 2010 to 2012. The report underlines improvements in gender parity and school enrolments at both primary and secondary level, in line with SDG 4 and Agenda 2063 goals 1, 2, 16, 17 and 18. It also indicates that approximately six out of every 10 SDG indicators cannot be tracked in Africa due to severe data limitations.

Now, two years on from the launch of the SDGs, their implementation needs to be strengthened through a number of actions. These include adopting a harmonised framework for monitoring, reporting and verifying the progress of the goals.

We also need to tackle the over-reliance on external funding, and strengthen statistical systems for data-gathering and management that will form the basis for informed decision and policymaking. The Third International Conference on Financing for Development, held in Addis Ababa in 2015, called for coordinated financial support from developed countries. But it also encouraged developing countries to deepen their domestic resource mobilisation efforts to support the implementation of developmental goals.

Shaping transnational relations so that African countries can reap the full benefits of partnerships with various actors and stakeholders – foreign experts, multinational corporations, NGOs, other Member States – will be instrumental in realising the SDGs across the continent. Partnerships should be built to encourage and support the flow of ideas and sharing of experience in policies, institutions and other practices.

This exchange of knowledge will serve not just as inspiration. It will also help to deliver tangible development by mobilising resources and deploying competence that will address the everyday plight of ordinary Africans, particularly women and young people. The various ambitions of the SDGs, Agenda 2063, the NEPAD framework and the national development strategies of African countries are, at their core, the same: to create opportunities for a better life for all.