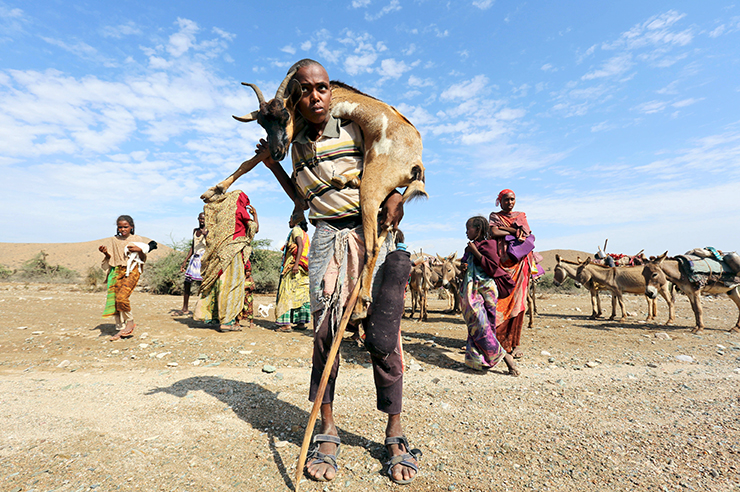 April 2016, herders in Somaliland during a severe El Niño-related drought that affected millions across the Horn of Africa. Somaliland, a semi-autonomous region in Somalia, suffers from high levels of land degradation.
© Feisal Omar/Reuters

For a very long time, land was forgotten. It was unappreciated and undervalued. As a result, we have witnessed unprecedented rates of land degradation and ecosystem loss. The Food and Agriculture Organization estimates that during the last 40 years nearly one third of the world’s arable land has been lost to erosion and continues to be lost at a rate of more  than 10 million hectares per year. These areas become desert-like. Of the 8.7 million species thought to have lived on planet Earth, eight per cent are extinct and 22 per cent are at risk of extinction because of habitat destruction.

The degradation of land impacts not only nature and biodiversity but also undermines the poorest and most vulnerable communities. About one billion people in developing countries live in extreme poverty. Two thirds of them live in rural areas. Hunger and poverty are often a direct consequence of land degradation, declining soil fertility, unsustainable water use and drought.

As incoming Secretary-General António Guterres said in his remarks to the General Assembly on taking the oath of office on 12 December 2016: “Climate change, population growth, rapid urbanisation, food insecurity and water scarcity have increased competition for resources and heightened tensions and instability”. The cumulative impacts of productive land resource scarcity could overwhelm the capacity of a number of governments to meet the basic needs of their people.

The situation is particularly telling in Africa. The continent is experiencing an unprecedented demographic explosion. The population will nearly double from 1.1 billion people in 2016 to an estimated two billion by 2050.

Since 1950, an estimated 65 per cent of all agricultural land in Africa has been affected by degradation to some degree. This means that more than a quarter of the continent may become unproductive. Occurring together, these trends are alarming: agriculture is the basis of most African economies, accounting on average for more than a third of GDP.

Vicious cycle
Up to 80 per cent of the African population rely on natural resources for their survival. Already, over 67 million people in the vulnerable Sahel region live with the effects of land degradation and desertification, while a third of Africa’s population live in drought-prone regions. Increasing water scarcity will impact hydroelectric power generation, which accounts for 80 per cent of total electricity production in 18 African countries.

An estimated 60 million people are at risk of having to move from the degraded and desertified areas of sub-Saharan Africa over the next 30 years.

Yet, as Shakespeare’s Lear says, “the wheel is come full circle”. Land is increasingly recognised as underpinning any effective global effort to achieve sustainable development for all. Sustainable Development Goal (SDG) 15 (life on land), in particular target 15.3 on land degradation neutrality, is creating a vital link between land and other critical development challenges.

Land degradation neutrality turns a vicious cycle – degrade, abandon and migrate, and then degrade again – into a virtuous cycle. In a practical sense, the term means that the amount and quality of useable land resources remain stable or increase. We can do this by better managing the land we have and by rehabilitating what we have degraded. When land degradation neutrality is achieved at scale, we will have more healthy and productive land everywhere, for everyone. The interconnected nature of peace, development, environment and rights means the pay-offs can be dramatic.

For example, restoring lost or degraded land helps climate change mitigation. Land is the second largest carbon sink, after the oceans. Restoring the soils of degraded ecosystems has the potential to store up to three billion tonnes of carbon annually. This is equivalent to storing up to 30 per cent of annual CO2 fossil fuel emissions. It also helps communities adapt to a changing climate. Sustainably managed land is more drought and flood resistant and is more resilient to erosion.

At the same time, land rehabilitation gives people and communities their livelihoods back. The total employment effect of the restoration economy ranges from 10 to 40 jobs per $1 million invested (supporting SDG 8 (on work and economic growth)). To put this in perspective, the oil and gas industry supports approximately five jobs per $1 million invested. Restoring just 12 per cent of degraded agricultural land could boost smallholders’ incomes by $35-40 billion per year (SDG 1, on ending poverty) and feed 200 million people per year within 15 years (SDG 2, on zero hunger).

In the sidelines of the UN’s climate conference in Marrakech in 2016, African leaders endorsed the ‘Triple S’ Initiative on security, stability and sustainability. This initiative highlights how restoring degraded lands and promoting programmes for youth employment and education, along with formalising land tenure, could provide alternatives to migration and even radicalisation on the continent.

Access and tenure rights over land often determine rural wealth and poverty. This is especially true for women. If women had the same access to, and control over, productive resources as men, they could increase yields on farms by 20 to 30 per cent (SDG 5, on gender equality).

For example, where rehabilitation has happened in areas of the Batodi region in Niger, underground aquifers have risen by up to 14 metres. As a result, women are now fetching water in wells that are half an hour – not half a day – away from their homes (SDG 6, on clean water and sanitation). The cost of this land restoration and rehabilitation was low: between $25 and $65 per hectare.

Completing the circle
But it is not just about food and water. As renewable energy relies to a great extent on healthy and functioning ecosystems, the sustainable management of land and water together is the only way to ensure a reliable energy supply, especially for the world’s poor, and to realise SDG 7 on affordable and clean energy.

While half of humanity – 3.5 billion people – currently lives in urban areas, by 2030 this will rise to almost 60 per cent. Every year, 19.5 million hectares of agricultural land are converted into urban centres and industrial space. Rapid urbanisation is exerting pressure on fresh water supplies, sewerage, land and soil resources, biodiversity and public health. Urban areas must embrace their peri-urban and rural surroundings for their own survival and to make cities work better, and in harmony, with nature’s ecological processes (SDG 11, on sustainable cities and communities).

Land rehabilitation and restoration is a cost-effective, job-creating accelerator of change. To achieve SDG 15.3, we need to improve at least 12 million hectares of degraded land annually. Currently, over 100 countries are setting their own targets to achieve land degradation neutrality, according to their specific national contexts.

The SDGs are designed to be universal in nature. If we really are to complete the circle, many more developed countries need to take up the baton of land stewardship.