Bribery and corruption divert money away from development. Although the Global South pays the highest price, the Global North is not immune and is often a party to corruption elsewhere 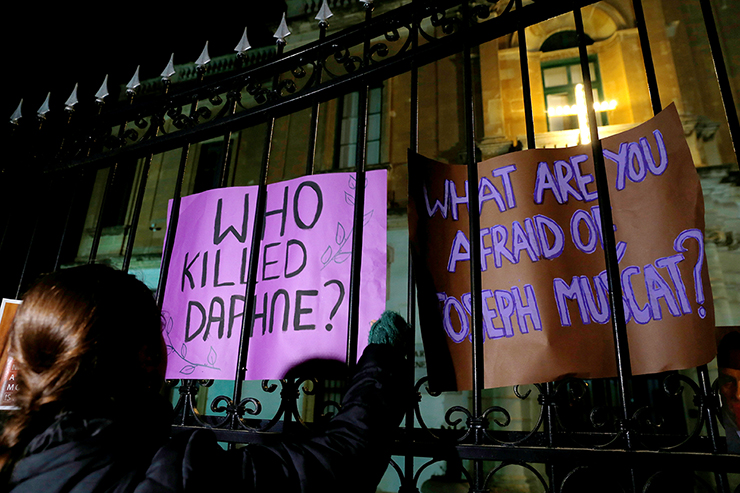 Protestors call for Malta’s police commissioner to resign due to his failure to find the killers of the journalist Daphne Caruana Galizia. She was murdered after accusing Pilatus Bank of facilitating corrupt political activities and money laundering. © Darrin Zammit Lupi/Reuters

Bribery and corruption divert money away from development. Although the Global South pays the highest price, the Global North is not immune and is often a party to corruption elsewhere

The Sustainable Development Goals (SDGs) are ambitious: to end poverty, protect the planet and ensure that all people enjoy peace and prosperity. Taken together, they are a framework to address the most pressing challenges of our time. Corruption represents a major obstacle to achieving these goals.

In July this year, Goal 16 of the SDGs (peace, justice and strong institutions) will be among six Goals reviewed in depth at the High-Level Political Forum on Sustainable Development at the United Nations General Assembly. SDG 16 is a vital target for the global anti-corruption movement, as it includes commitments to fight corruption, increase transparency, tackle illicit financial flows and improve access to information.

The failure to achieve these commitments will undermine not just SDG 16, but all of the Goals. It will adversely affect human development and the wellbeing of individuals and communities around the world. In this sense, the SDGs are not just a challenge: they represent an enormous opportunity.

The United Nations estimates that corruption, bribery, tax evasion and related illicit financial flows deprive developing countries of around $1.26 trillion per year. This has recently been reinforced by research from the International Monetary Fund showing that corruption reduces global tax revenues by $1 trillion annually.

Reducing corruption is an important component of the sustainable development agenda, and one that all state parties have an obligation to address. Although corruption is often thought of as a ‘third-world problem’, institutions in the Global North play an important role in the corruption cycle, and are therefore an essential part of the solutions.

If we compare the results of our 2018 Corruption Perceptions Index (CPI) with measures of the quality of democracy, we see that countries with healthier democracies have public sectors that are less corrupt. Looking at the Economist Intelligence Unit’s Democracy Index, for example, we see that not a single ‘full democracy’ scores below the halfway point in the CPI.

Preventing a vicious cycle
Robust and effective integrity systems in public-sector institutions are essential for ensuring that the actions of corrupt individuals do not undermine society’s trust in the entire system of governance.

In countries where corruption has deeply eroded public trust, we have seen populist leaders take advantage of outrage to drive forward an agenda that threatens fundamental rights and freedoms. This, in turn, can lead to an undermining of the very democratic institutions that are the best controls available against corruption.

Even in established democracies, corruption can undermine citizens’ trust and provoke reactions like abstention from elections, or contribute to other destabilising phenomena like the rise of anti-establishment parties and the spread of fake news.

As the receiving end of much of the world’s illicit financial flows, as well as the origins of many multinational bribery scandals, the Global North ultimately has an enormous effect on the extent to which high-level corruption impacts the lives of the poorest and most vulnerable members of our global community.

The developed world may experience fewer major public-sector corruption crises, but its institutions have to be able to respond and adapt when they do occur. Greater resilience in key areas would have a significant impact on achieving SDG 16.

1. Financial markets
The recent money-laundering crisis in Nordic and Baltic states has embroiled banks in countries with some of the least corrupt public sectors in the world, according to the CPI. In recent years, whistle-blowers and leaks of banking data analysed by investigative journalists have revealed multiple schemes to secretly funnel corrupt money into Europe. These illicit funds went towards bribing politicians to downplay human rights abuses, or were laundered for buying luxury property or access to elite schools.

Up to €200 billion of suspicious transactions passed through the Estonian branch of Danske Bank, Denmark’s biggest lender. Deutsche Bank, Swedbank and Nordbank have also been caught up in scandals. Money laundered through these mechanisms often originates in tax fraud and embezzlement, which deprives the country of origin of vital revenue for state services like education, healthcare and infrastructure. This is money that could fund much of the SDGs.

For countries in the Global North, achieving SDG 16 – and particularly target 16.4 to “significantly reduce illicit financial and arms flows, strengthen recovery and return of stolen assets, and combat all forms of organised crime” – means closing the regulatory loopholes that allow the corrupt to hide and launder their ill-gotten gains. Authorities need to adapt quickly to prevent more of these so-called ‘laundromats’ for dirty money from operating. To achieve this in Europe, we urgently need to see anti-money laundering supervision at the EU level.

2. Real estate and company ownership
Real estate in cities from London to Toronto to Dubai has also been shown to be highly susceptible to money laundering. In the last decade, almost CAD10 billion worth of property in the Greater Toronto Area was bought by companies with cash, much of it bypassing statutory anti-money laundering checks on sources of funds and company ownership. The list of politically connected individuals revealed to own luxury property in Dubai seems to grow longer on a monthly basis.

Opacity in company ownership compounds the problem by allowing the corrupt to remain anonymous in bank transactions or property purchases. A recent study by our coalition partners in the United States found that it takes less personal identification to establish a company there than it does to acquire a membership card at a public library.

To tackle this problem, governments around the world must ensure they fully implement their commitments on beneficial ownership transparency: in other words, revealing who really benefits from a company. G20 countries in particular should be leading the field in this area by making their high-level principles on beneficial ownership transparency a reality. Unfortunately, Transparency International’s latest assessment of their progress found that most were falling well short of their targets.

Success in these areas requires not only regulation but resources. Authorities tasked with supervising both the financial sector and real-estate markets have to be able to function effectively and keep pace with criminals and the corrupt, or they will lurch from crisis to crisis. The more authorities are under-resourced, the more the victims of corruption – ordinary people whose public services are undermined – will suffer.

3. Foreign bribery
Resources for fighting corruption are especially important for combating bribery by multinational corporations. One of the most shocking examples exposed in recent years is the massive foreign bribery scheme carried out by the Brazilian construction conglomerate Odebrecht. This involved about $788 million in bribes to government officials and political parties in at least 12 countries. By distorting the playing field and reducing the quality of service delivery, international bribery has an enormous impact on our ability to achieve all the other SDG targets, such as those aimed at improving access to education and healthcare, eradicating poverty, achieving gender equality, improving climate governance and building sustainable cities.

Yet our research shows that enforcement against foreign bribery is lacking among most signatories to the Organisation for Economic Co-operation and Development (OECD) Anti-Bribery Convention and four major exporters in Asia. Together, these countries account for more than half of the world’s exports, meaning that the majority of world trade is susceptible to insufficient anti-bribery oversight. OECD countries must ensure that their law enforcement agencies are equipped to investigate and prosecute companies when they pay bribes abroad. They also need to be better at cooperating and sharing information with authorities in other countries.

Missing targets
These are just a few areas where the North can help stop the global corruption cycle. Of course, they must not neglect the integrity of their own political systems either.

Because corruption severely undermines development, our view at Transparency International is that SDG 16 should be reviewed every year by the United Nations, and that this annual review should include the Goal’s progress indicators. As yet, there is no source or methodology to calculate the progress indicator for target 16.4: a reduction in the total value of inward and outward illicit financial flows. Nor is there an official indicator for measuring the return of confiscated proceeds of corruption to their rightful owners.

Such concrete targets could be a powerful tool in guiding institutions in the Global North towards more active responses to the corruption risks they are known to face. If they were to make greater strides towards effectively combating corruption, we would come closer to building a fairer, more peaceful and prosperous world for all.