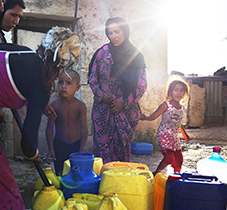 BAALBEK, LEBANON – JUNE 28: Syrian refugees fill jerry cans with water at a pump inside a camp for Syrians who have fled the fighting in their country on June 28, 2013 in Baalbek, Lebanon. Baalbek, which is located near the Syrian border, has numerous informal camps housing tens of thousands of refugees. Currently the Lebanese government officially hosts 546,000 Syrians with an estimated additional 500,000 who have not registered with the United Nations. Lebanon, a country of only 4 million people, is now home to the largest number of Syrian refugees who have fled the conflict. The situation is beginning to put a huge social and political strains on Lebanon with no end in sight to the war in Syria. (Photo by Spencer Platt/Getty Images)