With peace and stability a prerequisite for sustainable development, nowhere will the SDGs have the potential for greater impact than in countries ravaged by conflict 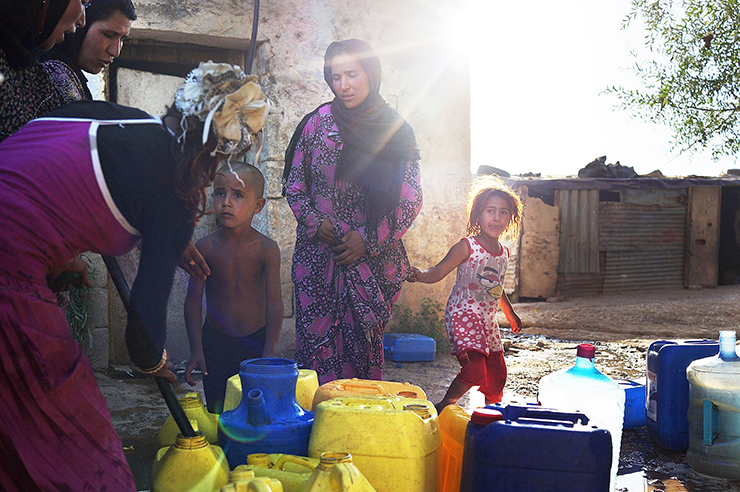 Syrian refugees at a camp in Baalbek, Lebanon, close to the Syrian border. Lebanon is now home to the largest number of Syrian refugees: one out of five people in the country is a refugee. © Spencer Platt/Getty Images

With peace and stability a prerequisite for sustainable development, nowhere will the SDGs have the potential for greater impact than in countries ravaged by conflict

The ramifications of the Syrian crisis are far reaching in all its neighbouring countries, but are especially felt in Lebanon, a country  still recovering from the scars of its own civil war.

The crisis has affected Lebanon in many ways: slowing down economic growth, amplifying social divisions along confessional lines and spawning political paralysis. The most dramatic impact is the influx of over a million Syrian refugees, who now constitute around a quarter of the population. Lebanon now has the highest per-capita concentration of refugees in the world.

Such combined shocks have greatly reduced Lebanon’s chances of meeting its development targets. Even before the outset of the Syrian crisis, Lebanon had a mixed performance on the Millennium Development Goals, registering good progress in nutrition, health and education, but lagging behind in key goals such as poverty reduction and environmental sustainability.

The crisis has further exacerbated these gaps – particularly as almost 90 per cent of Lebanon’s Syrian refugees live within the poorest Lebanese communities.

The exceptional magnitude of the crisis has prompted the UN to mount one of the largest and most complex response operations in the world. This is to meet the needs of both the Syrian refugees and – just as importantly – the Lebanese hosting communities. The United Nations Development Programme (UNDP)has partnered with the government and international donors to provide assistance to the poorest Lebanese municipalities to promote resilience and peaceful coexistence.

Ideal framework
Despite these efforts, however, the protracted nature of the crisis carries risks of instability, with implications extending far beyond the Lebanese borders. For this reason, the UN has placed peace and stability at the heart of its new assistance framework to Lebanon, calling on the international community to complement humanitarian assistance with increased development support.

The new Sustainable Development Goals (SDGs) agenda, with its explicit recognition of the intimate link between peace and development, offers an ideal framework to underpin our efforts.

Renewed hope
Recent political events offer renewed hope. After a two-and-a-half-year deadlock, Lebanon finally elected a president last October. A new cabinet of national unity was formed in December. Prime Minister Saad Hariri has committed to place stability and inclusive development at the top of his government’s agenda. In a meeting with UN agencies, he has stressed his conviction that the best defence against intolerance and extremism is to provide equal opportunities for people. He has requested UN support to produce a national development strategy aligned with the SDGs.

At the same time, the government and the UN have renewed their appeal to the international community to address the impact of the Syrian crisis, requesting $2.8 billion for 2017. If this seems like a lot, let us remember: one out of five people in Lebanon is a refugee. No other country in the world faces a similar situation.

Six years into the Syrian conflict, Lebanon remains at the forefront of one of the worst humanitarian crises of our time. The Lebanese people have shown exceptional commitment and solidarity to the refugees fleeing the horrors of war. It is our collective duty to provide exceptional support to them.