The real wealth of nations

The SDGs must be grounded in a ‘capability approach’ – where ‘success’ is measured not by economic indicators but by people leading meaningful, fulfilled lives 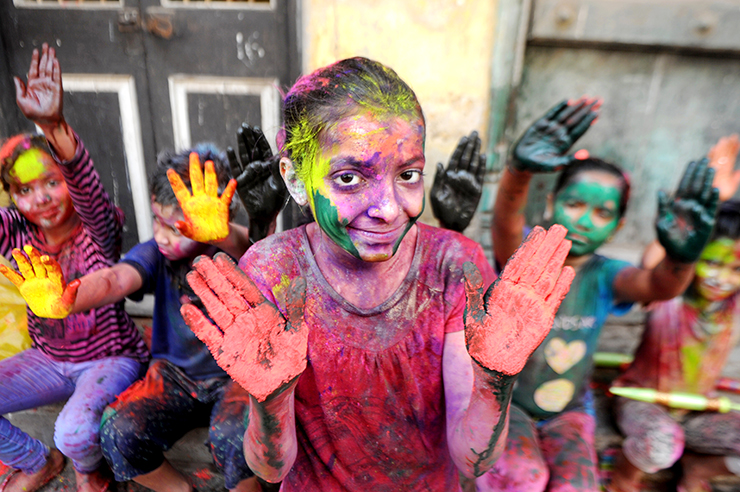 Children celebrating the Hindu festival of Holi in Chennai. The capability approach departs from wealth-based perspectives of development and focuses on the types of lives that people are able to live. © Arun Sankar/AFP/Getty Images

The real wealth of nations

The SDGs must be grounded in a ‘capability approach’ – where ‘success’ is measured not by economic indicators but by people leading meaningful, fulfilled lives

Recent articles published by UNA-UK, such as ‘Keeping the 2030 Agenda Alive’ by Köhler et al, have expressed some concern about the risk of the Sustainable Development Goals (SDGs) remaining an empty aspiration if social and economic policies do not shift.

The authors note that authoritarianism, not democratic governance, is on the rise. Rather than being guided by concern for ecological balance and the wellbeing of people – especially the most vulnerable – policy decisions are influenced more by the concerns of the wealthy, and financial interests. The impact of budgetary austerity is being felt throughout most OECD countries. The quest for universal social protection and labour rights remains elusive. Meanwhile, the poorest continue to suffer the most from climate change, to which they have hardly contributed.

Countries have begun reporting – albeit still voluntarily – on their progress in meeting the 169 targets of the 17 SDGs, as measured by 232 indicators. These voluntary national reviews have the potential to serve as powerful accountability mechanisms and to mobilise stakeholders.

But will it be enough to sustain policy change over time? Are the SDGs offering a robust normative framework – setting standards against which actions will be judged – to rethink the way we understand social and economic progress and to frame policies accordingly?

Like their predecessors, the Millennium Development Goals, the SDGs are targets born from a results-based management mindset. They are, however, much more inclusive. The SDGs are the product of global consultation processes, and relevant for all people everywhere.

Nonetheless, they remain results based, and focused on the pragmatic level. But development history tells us that if a pragmatic policy framework is not rooted in some strong normative basis, its sustainability is vulnerable to external shocks.

This was the case with the demise of the basic-needs approach pioneered by the World Bank and its then-director Robert McNamara. We argue that the SDGs need a more robust conceptual framework that is both results- and process-based, and which grounds them in stronger foundations to help withstand shocks. Our contention is that the ‘capability approach’, which originates from the work of economist and philosopher Amartya Sen, can provide just that. We offer four reasons for this.

First, like the SDGs, the capability approach offers a new perspective to assess the progress of societies. For far too long, how well countries were doing was assessed according to the material wealth their economies produced and not how their people were doing. Offering a different approach, Sen introduced the idea of capability in the late 1970s. He proposed it as an alternative to utility, income or consumption as the informational basis with which to make value judgements about how well societies were doing.

What ultimately matters are the types of lives that people are able to live – whether they can function well as human beings, and be and do things they value and have reason to value.

This may include whether people are able to work decently for a living wage, to shape their own lives, to live free of fear, violence and shame, to be adequately nourished and sheltered, to live in a clean environment with access to safe drinking water, and so on. In the words of UNDP’s flagship annual Human Development Report, which has served as a vehicle to translate into policies the ideas of the capability approach, it is people who are the ‘real wealth of nations’.

Like the SDGs, the capability approach takes a multi-dimensional perspective on progress and on poverty. The first SDG is to eradicate “poverty in all its forms and dimensions”, and this phrase recurs seven times in the SDG foundational document Transforming Our World. National multidimensional poverty indices (MPIs) – and the global MPI designed by the Oxford Poverty and Human Development Initiative for the Human Development Reports – can help achieve that goal. MPIs can also facilitate the recognition of overlapping inequalities and deprivations, just as the SDGs similarly recognise the interlinkages across goals, targets and indicators – for example, how access to safe water and health outcomes are connected.

Second, like the SDGs, the capability approach is applicable to all societies: materially poor and rich ones alike. Just as the SDG concern is for “all people, everywhere”, so is the concern of the capability approach to assess situations everywhere from the perspective of all people and how they are doing. This includes how well their natural environment is doing, for humans are part of a wider ecosystem and their quality of life is co-dependent on the good functioning of the ecosystems in which they live. The underlying anthropology of the capability approach, which recognises that humans are interdependent and often group based, can also bring a richer analysis of how the ability of some people to live well is connected to how others live.

Both the SDGs and the capability approach have interconnectedness across dimensions at their core: for example, how targets of sustainable consumption in one place can be linked to better health outcomes and working conditions elsewhere. More work is needed to distil the complex web of interconnections between the various SDG targets across countries, and to determine how the choices that people make in one place affect the choices people can make in others.

Third, like the SDGs and their concern for “leaving no one behind”, the capability approach sees each person as an end. Every person is interconnected and also unique. This echoes the SDGs’ call for disaggregated data: to break down information by ethnicity, disability status, gender, age, geographical location, and so on. This is already being done in the indicators related to SDG 1, with the global MPI being disaggregated according to the various characteristics of a person – from how old they are to whether they live in a rural or urban area.

By doing this, one can see over time whether the poorest are catching up – or not. Each person matters equally, but those who are lagging far behind and those who suffer most severely from deprivations in multiple dimensions of their lives – the poorest, in other words – should be our priority. It is not by accident that the first SDG relates to eradicating poverty in all its forms and dimensions. Every other SDG has to be considered from that perspective: from that of the lives of the poorest people.

Fourth, the capability approach emphasises that the road to human dignity, which the SDGs call on us to embark upon, is not only about outcomes but also about processes. Humans are the only living creatures who can author the story of their lives. They are the actors of their destiny. This is why the capability approach focuses on processes as well as outcomes. It stresses empowering poor people as ‘agents’ – to shape their own lives and communities, as well as act on behalf of others. It also emphasises public action, which includes and goes beyond state action. The SDGs may have less of an explicit focus on empowerment, but (as highlighted above) they are the result of global consultation processes, and states have committed to engaging the private sector and civil society.

Every person, everywhere, knows that we have only one planet Earth to call home. Our challenge is to create and improve continually the conditions for every human being to develop and flourish in all dimensions of her or his life. We hope that by using the capability approach as a normative framework to underpin the SDGs, we will make the Global Goals stronger. We also hope that by cultivating ‘agency’, we will enlist the creativity and imagination of new actors in this common goal.