Protecting the rights to water and sanitation 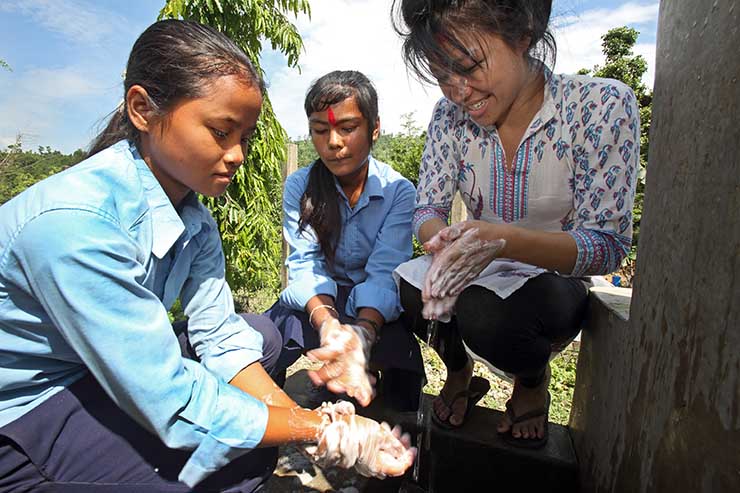 Handwashing at a Nepal Water for Health (NEWAH) WASH water project in Puware Shikhar, Nepal. Hand-washing with soap has long been central to protecting health, reducing the incidence of diarrhoea and acute respiratory infections, which now includes COVID-19. ©AusAID/Jim Holmes

Protecting the rights to water and sanitation

The year 2020 is an important one for the human rights to water and sanitation. It marks the 10th anniversary of the UN General Assembly declaration that recognised these rights. It’s also the start of the mandate of the third UN Special Rapporteur on this issue, after 12 years of work by previous Special Rapporteurs. What have we learnt during this time?

First, the recognition of the human rights to water and sanitation has moved the debate from the discussion of whether they should be considered rights, to the ‘implementation’ of those rights. This has been achieved through: advancing the formal and legal recognition of the rights at both national level and in international forums; by different actors and agencies recognising the rights, defining the different elements and challenges associated with the rights; and, ultimately, advancing the fulfilment of the rights. Significant progress has been made on all these fronts.

Today, some 40 countries recognise the human right to water in their constitution. The Sustainable Development Goals (SDGs) agenda, while not explicitly mentioning the rights to water and sanitation, has a clear focus on universality with its ambition to leave no one behind. Many aspects of the human rights, though not all, have been included in the formulation of the SDG 6 (clean water and sanitation for all) targets and indicators.

The work of the Special Rapporteurs during the last 12 years, including 23 country visits, 22 thematic reports and countless sessions, keynotes and webinars, have greatly contributed to the understanding and dissemination of the human rights to water and sanitation. NGOs, civil society, bilateral donors and UN organisations have largely embraced the rights in their language and worked on how to implement them through their operations.

At the same time, the rights are nowadays recognised by water utilities, both public and private, and multiple guidelines and manuals have been developed in this regard. In addition, during the last 10 years, the levels of basic access to water and sanitation have increased substantially, as the UNICEF/World Health Organization Joint Monitoring Program (JMP) shows. Can we then be satisfied and declare the human rights to water and sanitation as on their way to being fulfilled? Not yet, it seems, as there are a few aspects that need further attention.

Second, recognition of the rights at national level per se does not necessarily lead to the realisation of those rights for the population. Recent research (from Langford, Schiel and Wilson, published in the journal Water) shows that constitutional recognition of the right to water alone is not enough to expect higher rates of access to water, and that recognition of the right needs to be coupled with democratic governance (characterised as ‘rule of law’ and ‘degree of civil-society participation’) to make a difference. The recent follow-up reports of the Special Rapporteur country visits also show low levels of implementation of the recommendations provided, particularly those that require more structural changes at national level, such as legal or financing aspects.

At the same time, most of the responsibilities for water and sanitation service delivery lie at the local level. In many cases, local actors have limited resources and capacities to take on the responsibility of either providing or controlling an adequate level of service to fulfil the rights. There are still many problems we need to address, including lack of regulation, limited access to information, lack of mechanisms to oversee and enforce the adequate use of resources, limited civic space, and lack of consumer protection mechanisms.

Building forward better, post-pandemic
COVID-19 presents an immense challenge to our global society, but also offers opportunities to underline the importance of basic services in general, including water and sanitation. Coronavirus has shown the importance of water as a key ingredient in hand hygiene, which has been among the main prevention measures in the first phase of the pandemic.

This recognition of the importance of water has enabled a number of short-term measures in many aspects of water and sanitation service delivery. Governments have ordered the reconnection of customers to water supplies that had been previously disconnected due to lack of payment. They have provided subsidies to those most in need and have forbidden any new water supply disconnections. And they have put in place extraordinary measures to deliver water to the people that were not connected to a piped water supply network, not least with the collaboration of international organisations, NGOs, civil society and through people’s solidarity at large.

In addition, many water and sanitation utilities have advanced years in terms of how to work remotely, improve supply chains and establish online payment systems and customer complaint mechanisms. The short-term response has shown that a lot is possible, given the impetus.

But there are important threats on the horizon. Many of the emergency measures taken by governments and utilities were done provisionally, without a clear plan on how to finance them. They were mostly focused on the people served through formal channels (for example, piped water) and those that already had access to social protection. So they did not reach all of the population in need. Meanwhile, utilities and other service providers are seeing a large drop in revenue at the same time as increased costs due to the exceptional efforts to increase service delivery during the pandemic.