Around the world, the pandemic is rendering once-safe jobs potentially unviable. What must governments do to keep the ambition of full, productive and decent employment for all alive? 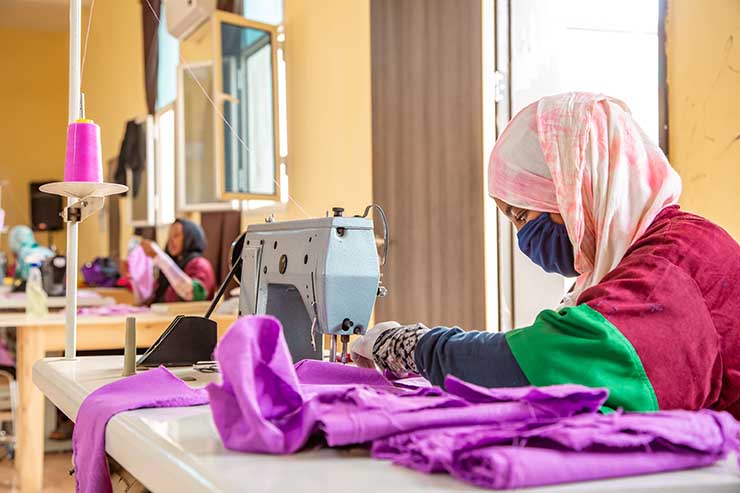 A vocational training centre for women in Nouakchott, Mauritania, where seamstresses sew cloth masks to protect vulnerable and disabled persons from COVID-19.
© UNICEF/UNI342297/Pouget

Around the world, the pandemic is rendering once-safe jobs potentially unviable. What must governments do to keep the ambition of full, productive and decent employment for all alive?

On 31 December 1999, minutes before the dawning of a new millennium, American President Bill Clinton stood at Washington DC’s Lincoln Memorial and declared: “The great story of the 20th century is the triumph of freedom and free people, a story told in the drama of new immigrants, the struggles for equal rights, the victories over totalitarianism, the stunning advances in economic well-being…” Just two decades into the new millennium, the fragility of these victories is glaringly apparent.

This century has seen the subjugation of people under rising economic inequality. COVID-19 is exacerbating this trend. The pandemic has grown from a health crisis into an economic one, threatening livelihoods across the globe. It is reversing many hard-won development gains and endangering the achievement of the Sustainable Development Goals.

Composition of growth
Research by the International Monetary Fund confirms that inequality is bad for growth. But the pandemic has also highlighted that inequality left unchecked erodes economic strength and resilience. Rebuilding in the wake of the pandemic offers an opportunity to correct our course.

To do so, first, decision-makers must abandon the outdated assumption that economic growth will itself lead to more, and eventually better, jobs. Even before the pandemic, capital intensification and technology were fuelling economic growth in many developing nations. But this growth did not generate enough employment to absorb their surplus labour.

COVID-19 is making things worse. Sectors from tourism to hospitality, and from aviation to retail, are taking a hit. Fewer jobs coupled with large and growing youth populations in many developing nations are exacerbating the labour surplus, exerting downward pressure on wages and working conditions. A lack of productive jobs and low wages manifest in a decline in private consumption and low aggregate demand. This adversely affects production and investment, creating a vicious cycle.

The composition of economic growth matters. Beyond emergency relief for the most vulnerable, policymakers must target stimulus measures at supporting labour-intensive sectors ranging from agro-processing and infrastructure to apparel and garments.

Social security
Second, governments must strengthen access to social security, initially providing public assistance to the most economically vulnerable, but seeking to eventually expand the public provision of universal benefits.

As the pandemic brings social and economic activity to a standstill, it is not only increasing unemployment. The Global South is also witnessing an uptick in informal and precarious work. The rise in informal employment and deterioration of working conditions squanders precious productive potential and reduces consumption power.

The International Labour Organization estimates that the global loss in labour income was $3.5 trillion in the first three quarters of 2020 as a result of a decline in working hours and activities. The reduction in working hours in the Global South is a result of the fragmentation of low-productivity informal jobs, which is growing in these troubled times.

In developing nations, the poor cannot afford to be unemployed, so many resort to sharing out low-productivity work to make ends meet. The pandemic is deepening this trend.

In India, for instance, the national lockdown instituted at the end of March led to a significant loss of labour income. But even during the lockdown, the sale of food – including by informal street-side vegetable vendors – was considered an essential activity exempt from the lockdown. As a result, anecdotal evidence suggests that many workers, unable to undertake their normal income-generation activities, resorted to selling vegetables to survive.

Moreover, as bricks-and-mortar businesses fail, more workers are turning to the ‘gig’ economy to try to make a living, but an oversupply of labour in these sectors will drive down working conditions further.

Informal, self-employed and contractual workers generally lack social security coverage. As the share of these workers grows, social security provision becomes delinked from employment. It therefore falls to governments to provide coverage. Benefits are not only good for worker productivity, but they also help smooth consumption during times of distress and demand shocks.

Although school enrolment has increased significantly over the last several years, the education and training systems in many developing nations have not kept pace with the changing needs of a 21st century labour market. Children from economically vulnerable households are particularly at risk of receiving poor-quality education, learning and training facilities.

The pandemic is widening the chasm between economically privileged children and those from socio-economically weaker strata. Many children are unable to attend school. While the middle and upper classes have access to the technology that enables distance learning, children from disadvantaged households do not. This sets children from disadvantaged backgrounds further behind in their trajectories, sowing the seeds of inequality for years to come.

Constrained fiscal space in many developing countries makes it even more challenging to realise these ambitions, at precisely the time that the need is growing. But laying out an iterative approach with clear priorities is a good place to begin. An economic crisis such as this inevitably transforms the fiscal calculus. Governments must loosen their fiscal restraint to help their economies stabilise and recover by prioritising job-rich economic growth, instituting effective social protection, and making appropriate investments in human capital.

Before the pandemic, globalisation and the ensuing economic expansion unquestionably lifted millions out of poverty. In the aggregate, the world seemed healthier and more literate than in the past.

Yet it is now apparent that many were just one health emergency away from falling back into poverty. Lower infant mortality and higher life expectancy, particularly in the absence of affordable access to quality healthcare, did not lead to healthier lives. Literacy did not always translate into greater employability or economic mobility. Now, as governments recover and rebuild after the pandemic, there is an opportunity to set things right.