The poverty trap in an era of inequality

Breaking the cycle of poverty requires an understanding of the circumstances that sustain it. What can be done to address poverty that is intentional and not accidental? 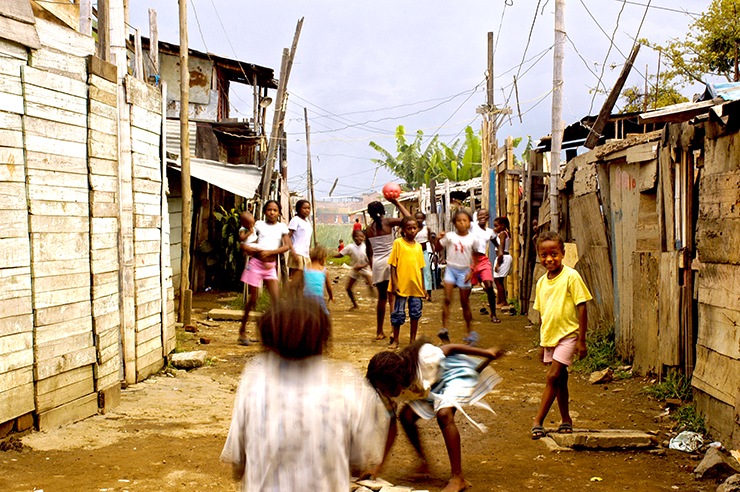 Children in the Aguablanca district of Cali, a city with one of the largest black populations in Colombia. Afro-Colombians constitute a disproportionate amount of the poor, in a country whose development has been held back by high levels of income inequality. © LOOK Die Bildagentur der Fotografen GmbH/Alamy Stock Photo

The poverty trap in an era of inequality

Breaking the cycle of poverty requires an understanding of the circumstances that sustain it. What can be done to address poverty that is intentional and not accidental?

If you are caught in a trap it means you can’t get out until someone lets you out. When people talk about a ‘poverty trap’ that is what they mean. In the pre-Sustainable Development Goals (SDGs) era, culminating in the Millennium Development Goals, the focus was heavily on the world’s very poorest countries (with a particular concern for Africa).

Back then, the poverty trap was understood as a lack of capital and credit, sometimes exacerbated by geographical circumstances. The solution, it was argued, was an injection of finance to kick-start growth and poverty reduction. Whether such a solution worked or not is a matter of debate. Some say there was not enough aid; some say there was too much.

Let’s look at two countries that have fared very differently in the last 50 years. South Korea is perhaps the world’s most inspiring development success story. In  1967 its GDP per capita was within touching distance of Ghana’s, just under $1,500 and just under $1,000 respectively (constant 2010 US$). By 2015 South  Korea could boast GDP per capita of $25,000, an increase of almost 1,700 per cent, while Ghana’s had increased just  70 per cent to $1,700.

Ghana has remained in a poverty trap, while South Korea has successfully escaped it. (And, yes, South Korea did receive significant international aid in the 1970s that probably helped it on its way.)

So far, so conventional. But there is a problem with this conventional narrative. It has come to imply that poverty is best understood as a kind of unfortunate circumstance that sensible economic policy, including often a large injection of cash, will be able to overcome.

Poverty, in this way of thinking, has been the natural lot of most humans for most of history. Some have now emerged from it, others are still stuck in a trap.

Setting the trap
One of the main contextual transformations in the mid-2010s, compared to two decades ago, is that there are very few low-income countries left – and even some of those are seeing fairly strong growth rates. Almost all countries are now either middle-income or high-income. But a large proportion of people in most middle-income countries remain in poverty. Perhaps not always the most extreme form of poverty as measured by $1.90-a-day style data, but deep poverty nonetheless.

How can that be explained? These countries already have access to capital and credit, and many have done for generations. Why, then, are so many still mired in poverty? The standard answer, building on the ‘poverty trap’ literature, is that the political and business elites in countries such as this have the means but have not yet shown the will to invest in the right way in poor communities.

But what if it is even more sinister than that? What if the wealthy classes want the poor to remain poor? What if they are themselves setting the poverty trap?

I lived in Colombia for some years. It has been a middle-income country for decades and has been described to me as a ‘vividero’: a great place to play if you have the cash. Living well in Colombia depends a great deal on income and wealth differentials. If the wages and capital of the majority improved significantly, gone would be the cheap maids, labourers, food and travel. The affluent, often flamboyant, lifestyle enjoyed by wealthy Colombians would be threatened. The privilege to which you have become accustomed and which you hope to hand on to your children begins to look less sustainable.

It is perfectly plausible, even logical, to deduce that those currently benefiting from great inequality will do their best to maintain it. As we enter the era of the SDGs we are seeing more countries that resemble Colombia. As inequality between countries continues to reduce (as poorer countries very gradually converge with wealthier ones) inequalities within countries are increasing.

This is the poverty trap facing billions of people in the world today. Whether they are extremely poor or living above the $1.90 poverty line, they are miles away from having anything resembling a life of reasonable opportunity and stability. This is not an accident of nature but a consequence of a specific set of instincts and decisions intended to maintain high levels of inequality. This matters because the policies and actions required to respond to the poverty trap depend on one’s analysis.

The lack of political rebalancing is the main reason that so many middle-income countries remain middle-income, with vast swathes of their citizens living either in extreme poverty or one or two rungs above that. And no amount of capital injection from the outside is going to change that. This is about politics and power. It is about voice and struggle. It is about taking on vested interests and winning, somehow, in the face of great odds. And the role of the international community is to recognise that these political struggles are necessary and to place itself firmly on the side of the marginalised.

Fortunately, there is a win-win for wealthy elites – if only they can see it.

Growth and development
A few years ago my wife and I visited South Korea. My wife is Colombian so her comparison was not with Ghana but with that country, and it was equally stark. In 1967, Colombia’s GDP per capita was significantly higher than South Korea’s, just under $2,500. However, by 2015 it was less than a third of South Korea’s: around $7,500. My wife noted that her country had failed to capitalise on its better economic position, remaining among the ranks of the middle-income countries – a story echoed throughout Latin America and much of the world.

Colombia, like so many other middle-income countries, has not made the shift from exporting non-value-added natural resources to becoming a manufacturing economy. And its economy is sluggish for that reason. What South Korea did was invest in education and labour-intensive industry in order to turn this around.

It took the crises of the post-Second World War world to provide South Korea with the context within which to do this, as it facilitated taking on vested interests – particularly landowners. But it has led to growth and development beyond that which anyone could have expected – a kind of progress that even the most stubborn of elites could be persuaded to want for their own countries.