How can civil society gain more influence in the policy-making process for achieving a sustainable future? 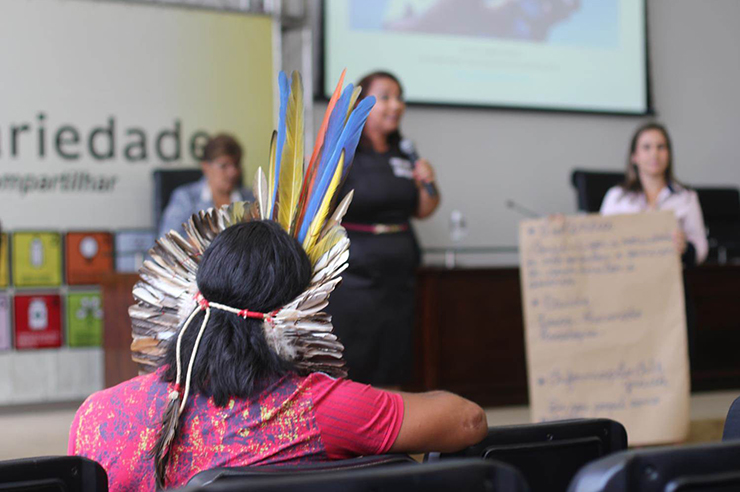 How can civil society gain more influence in the policy-making process for achieving a sustainable future?

For the past three years the international community and stakeholders around the world have been engaged in negotiating a new global development framework to eradicate poverty and promote sustainable development. This new agenda – titled Transforming our world: the 2030 Agenda for Sustainable Development – was officially adopted at the UN in September 2015 with an impressive outpouring of international goodwill.

With its 17 Sustainable Development Goals (SDGs), the new agenda is an interdependent and multi-dimensional tapestry that defines a vision of how the world should look in 2030. Unlike its predecessor, the Millennium Development Goals – which were created without the involvement of governments and, most importantly, the people themselves – the post-2015 process has borne witness to a shift in partnership between governments and civil society, children and youth, and other stakeholders that connected across the three dimensions of sustainable development to create the new agenda. (In this article, we use the broad terminology of ‘civil society’ and ‘other stakeholders’ to go beyond non-governmental organisations and include the private sector, local authorities, trade unions, people with disabilities and others.)

An agenda by and for the people
From this perspective, Agenda 2030 is regarded as the most inclusive intergovernmental policy process so far in the history of the United Nations. This outcome has been the result of the significant role played by civil-society organisations in the actual negotiations and in helping shape the new agenda. It reflects the fact that the social, economic and environmental constituencies are starting to approach development together, increasingly turning to the ‘local’ to create space for different groups of citizens to participate and organise for political change.

However, serious gaps remain. The new model must be implemented in a way that does not downplay questions of power relations and sources of capacity for civil society to participate and organise for political change at global level. Drawing lessons from the process that led to Agenda 2030 and using evidence of practice, we highlight below tools and spaces that generate more meaningful participation. Attention is drawn to both opportunities and obstacles that are determined by an external environment (structure) and movements organising strategic efforts (agency).

The intergovernmental process that created Agenda 2030 was open to civil-society participation in all its phases. The first phase focused on producing the goals and targets, for which an Open Working Group (OWG) was established. The OWG met from 2013–14 in sessions that were open to civil society. Specific spaces were established for civil society to provide input during official sessions and through online platforms. At the same time, the My World Survey mobilised seven million people to vote on what would make the most difference to their lives.

Similarly, the report of the UN Secretary-General’s High-Level Panel on the Post-2015 Development Agenda included consultations with civil society.1 There was also a series of national, regional and thematic consultations that welcomed inputs from civil-society experts and other stakeholders. The final phase of the process, from January to July 2015, was held with civil-society participation in all plenary sessions.

The co-facilitators ensured the engagement of relevant stakeholders by convening interactive dialogues throughout the process.2 These structured dialogues enabled many groups to directly influence the development of the goals, targets and the final outcome document. It is important to recognise that organisations with resources to send representatives to New York had higher chances to act successfully. Nevertheless, access to draft negotiation documents, the webcast of plenary sessions, the use of social media and other spaces created by the UN Department of Economic and Social Affairs and the UN Non-Governmental Liaison Service facilitated the participation of those who were not in the negotiation room.

Unfortunately, the rhythm of the negotiations and lack of translated documents beyond English generated challenges for the wider engagement of civil society, especially from developing countries. It also became evident that the presence of informal channels and relationships were crucial to influencing deliberations. Although a more formalised structure for participation is useful in addressing some of the current obstacles to civil-society involvement in global governance, the official space for participation was not always sufficient. Nor was it always the most efficient for influencing deliberations and language suggestions.

Influencing power was also connected to stakeholder ability to shape decision-making through informal channels and the ability to leverage own organisational structures for support. This constituted one of the weaknesses of the consultative process facilitated by the UN. One of the key global dialogues was on Participatory Monitoring for Accountability, which aimed at showcasing examples of good practice at country level to feed into the Means of Implementation section of the outcome document. Although much effort was put into this year-long consultative process, the lack of watchdogs at the global level hindered the efficient integration of recommendations.

Lessons learned from the process show that to influence decision-making, civil-society groups needed to recognise that an intergovernmental process demands a different set of skills and resources than a national process. The expert level of input needed – meaning language and textual recommendations fit for an intergovernmental process – produced some challenges for civic engagement, especially for grassroots organisations. While various groups may have previously utilised the UN as a global forum to call attention to particular agendas, the focus had to shift towards influencing official deliberations.

As a result, civil-society organisations undertook intense internal capacity-building efforts throughout the process. They eventually learned to frame messages and proposals in formats that could be considered by delegates and gained more sophisticated understanding of both process and negotiation language. Governments, on the other hand, often turned to civil society and read their reaction papers and analysis to fill research gaps that stood in the way of effective decision-making.

When developing common positions, language barriers and low internet connectivity proved to be challenging. To overcome these obstacles, the campaign facilitated communications in several languages, set up online spaces for discussion and updates and actively used social media for engagement. Empowerment was regarded as a crucial tool to enable meaningful participation. Capacity-building efforts were made to strengthen dialogue between local civil-society organisations and their country delegates, including facilitation of participation from the South. Still, the pace and amount of information shared with colleagues at the national level was identified as a challenge for some organisations, especially the small ones that did not have dedicated staff to follow the discussions.

Those challenges were not unique to Beyond 2015; other groups and constituencies experienced similar issues. However, all these tools and spaces created by Beyond 2015 enabled the campaign to keep its members informed about the intergovernmental process – its phases, key issues and country positions – in a way that kept local and regional actors mobilised and ready to engage. The capacity to coordinate at different levels – national, regional and global – was key to giving voice to civil society and grassroots movements and to help bridge the gap that often exists between capitals and New York.

Maintaining and increasing engagement
The process that led to the agreement of Agenda 2030 combined a high level of interest from governments, the UN system, civil society and other stakeholders with an unprecedented open intergovernmental process at the United Nations. Civil society and stakeholders used the opportunity to provide expert input to discussions, although with varying degrees of capacity and impact. The complementary character of structure and agency to understand meaningful participation is crucial.

Although the development of a structure for civil-society engagement in international decision-making is necessary, acting successfully to influence deliberations cannot solely be understood as a product of participation in formal intergovernmental mechanisms. Influencing power is also connected to stakeholders’ own strategic efforts.

The challenge of maintaining this level of inclusion, transparency and participation through implementation and follow-up and review of Agenda 2030 remains. At the global level, the High-Level Political Forum (HLPF) is the space for interaction and follow-up. Agenda 2030 is clear on the call for inclusivity and engagement but the details have yet to be established. The 2016 session of the HLPF, to be held in June/July, will be a critical milestone in this regard.