Why is peacebuilding so difficult to achieve?

According to the World Bank, 90 per cent of civil wars over the last decade took place in countries that had already experienced conflict. What are the key ingredients that trigger a return to war, and how can we try to ensure that peacebuilding succeeds and lasts? 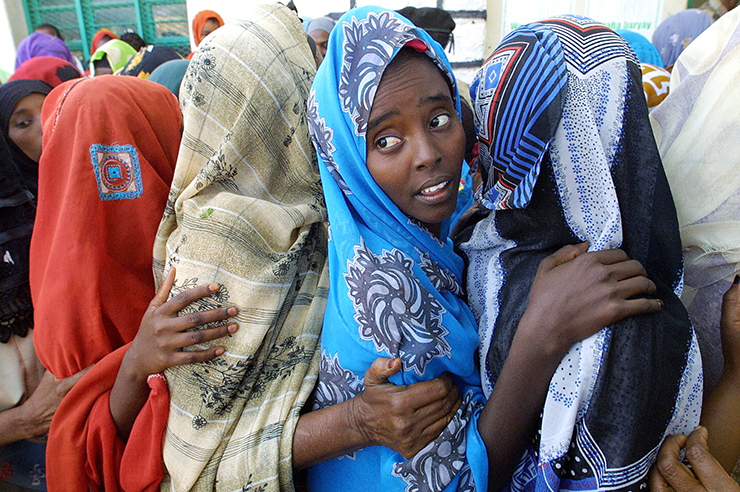 Women waiting to vote on the constitutional referendum in Hargeisa, Somaliland. The region, which declared independence from Somalia in 1991,  has been hailed as having had a relatively successful internal reconciliation process in the 1990s. © Pedro Ugarte/AFP/Getty Images

Why is peacebuilding so difficult to achieve?

According to the World Bank, 90 per cent of civil wars over the last decade took place in countries that had already experienced conflict. What are the key ingredients that trigger a return to war, and how can we try to ensure that peacebuilding succeeds and lasts?

The world is celebrating the recent peace agreement in Colombia, but the real peacebuilding starts now. Signing a peace accord may mark the end of a conflict on paper, but the impact on the ground is often minimal.

Looking at civil wars in Europe throughout the 20th century, it took decades for the divisions to heal, as deep-seated tensions do not disappear overnight. Nor is peacebuilding as simple as putting together a shopping list from the four elements of the ‘peacebuilding palette’ – picking from security, the political framework, socio-economic foundations, and reconciliation and justice.

Transitioning from war to peace is not a technical exercise but a highly political process where different principles, priorities and approaches need to come together. There is no one-size-fits-all template or solution: what works in one place may not work in another because every person, community or society deals with the aftermath of conflict differently.

1. A rigorous, continuous analysis of the context is essential. With new government and civilian structures in place post-conflict, international actors often rush ahead with the peacebuilding process without fully knowing the context of the crisis.

Obtaining a more nuanced understanding means diving into the long-standing and complex political, economic and socio-cultural features of the country. This includes analysing the history of the conflict and relationships of power and competition, identifying local champions for peace and highlighting obvious triggers of conflict.

No amount of scenario planning or policymaking will bring success if those involved in the peacebuilding process cannot untangle the complexity of the crisis. Taking a conflict-sensitive approach is an essential prerequisite to implementing peacebuilding programmes.

2. Peacebuilding must be locally owned and led. External actors are not the real drivers of change – local actors are. To be transformative, peacebuilding programmes must be shaped and led by local actors’ views and examine issues of inequality, identity and societal fractures. Imagine the peace agreement as bricks in a wall. The work of local actors – including those who have been involved in the conflict alongside those who have worked hard for peace – constitutes the cement that holds those bricks in place. Without that cement, the wall will collapse.

Too often, when international actors take a technical institution-building approach to peacebuilding and engage only with a few state officials or former belligerents, they fail to capture the full tensions and effects of deep trauma within a country. Peacebuilding must involve all levels and sectors of society, from government officials to grassroots and religious networks. The ordinary citizens of the country – women, the young, elders, and faith, ethnic and community leaders – will have been most affected by the crisis, and will in turn be most affected by the reconstruction process. Without their full involvement, the peacebuilding process will only exacerbate pre-existing social division.

3. There needs to be a more cohesive collective effort when it comes to supporting peacebuilding in post-conflict contexts. This must start with the UN, which is generally a key player in such processes. The essential purpose of the UN is to protect civilians and sustain peace, but the current architecture is making it difficult for the UN to fulfil that mandate.

On the one hand, its staff often lack the knowledge of the context and the technical capacity to implement peacebuilding programmes. On the other, planning capacity is not well coordinated between UN missions, country teams and donors. From the outset of a war, whether it is deciding on planning and assessment tools or on sharing information and analysis, there is invariably little communication between different players. If peacebuilding programming is to have any chance of success, there has to be a greater level of genuine cooperation between all involved.

The case of Somalia
Somalia is a prime example of the complexity of peacebuilding. By the late 1990s, south-central Somalia had deteriorated into lawlessness, conflict and chaos. International actors engaged in intensive diplomacy, with close to 10 back-to-back peace conferences between 1991 and 2004. All of them failed. Conversely, the north stayed relatively peaceful, with internal reconciliation processes led by Somalis in Somaliland and Puntland.

In Somaliland, traditional leaders, politicians, business people and women’s organisations put together a series of inter-clan reconciliation conferences in the early 1990s with limited external support (there was some funding and logistical assistance from international non-governmental organisations).

While contextual factors and timing may have contributed to this success, the Somalia case re-emphasises the critical importance of supporting local reconciliation and peacebuilding before rushing to central state-building. This is an important lesson to inform current efforts in Somalia. Despite the signing of the New Deal Somali Compact in 2013, where the international community pledged €1.8 billion to support the state, international backers have so far been unable to address pre-existing structural violence, widespread poverty and the clan politics that has fractured Somali society.

The problems are two-fold:
1. Peace conferences cannot be led from outside. Somalis are used to finding their own ways of resolving conflicts. When the 2013 Somali Compact was established, the task force comprised government representatives, donors and just one representative from parliament and civil society. There was no opportunity for Somali citizens to participate, which meant that their priorities were not included in the broader peacebuilding programme. This top-down approach resulted in rushed decisions and ineffective engagement, often made to meet donors’ timelines.

2. Healing trauma and social divisions after a long conflict is incredibly difficult. There is still deep distrust and friction between Somali groups, particularly with minority clans in south-central Somalia. Reconciling deep-rooted differences will take time. More opportunities for dialogue need to be created to mediate local relationships and promote community-level peacebuilding. Local-level peacebuilding efforts take decades of sustained effort – whether it involves healing wounds from the conflict or mediating resource, clan or land disputes – with external actors following their lead and providing appropriate support.

Peacebuilding is a complex process for which there is no blueprint or linear trajectory. But it is worth remembering the three key things that can help it succeed: understanding the context, ensuring that national and local actors genuinely lead and meaningfully coordinating external support. While external support can be crucial, without carefully addressing existing tensions and securing local buy-in, long- term success cannot be achieved.