Peace and security for sustainable development

Conflict seems an ever-present fact of human existence, and nearly always at the expense of societal development. How can the international community ensure conflict does  not derail the SDGs? 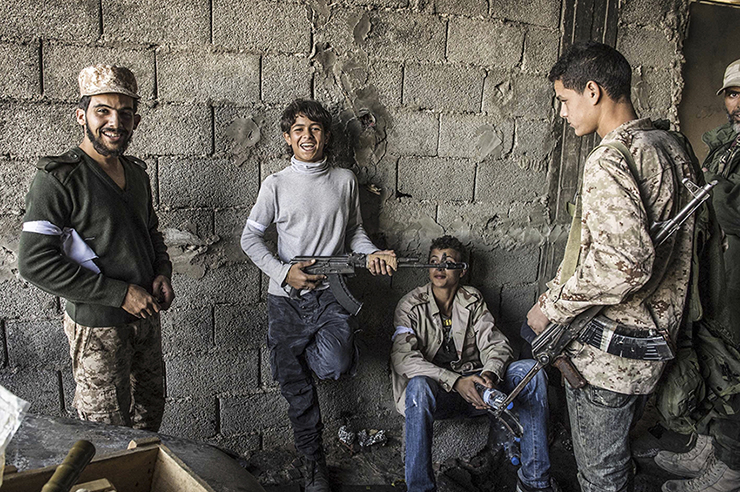 Fighters of Fajr Libya (Libyan Dawn) waiting during clashes with Zintan militia, fighting for control of Kikla in Libya. International intervention in Libya, which was billed as protecting the people from an oppressive dictator, has contributed to the spiral into civil war  © Getty Images/Ahmet Izgi/Anadolu Agency

Peace and security for sustainable development

Conflict seems an ever-present fact of human existence, and nearly always at the expense of societal development. How can the international community ensure conflict does  not derail the SDGs?

The growth of middle-class interests in a society – property and small business ownership, education and a sense of family stake in a society for future generations – is no guarantee that it will not be riven with conflict and insecurity. But societies are less prone to – and quicker to recover from – civil conflict if there is an active middle class with the opportunity to press its interests to government.

During the Cold War the relationship between development and conflict was effectively subordinated to the competition between the superpowers. Developed countries and the superpowers were assumed to have far too much to lose in any direct conflict. Their antagonisms were played out by proxy among other countries across the world. In these circumstances, development was highly politicised, skewed towards military and security spending, and frequently had the effect of creating and bolstering autocratic dictatorships of both capitalist and socialist persuasions.

It is not surprising, therefore, that at the end of the Cold War in 1991 – and after some 30 years of learning the effects of organised international development across the world – there should be a desire to put development aid on a new basis. The UN’s Millennium Development Goals (MDGs) were the most eloquent and important expression of this aspiration.

Development had to be sustainable, not politicised for the short term, and should concentrate more on governance, security sector reform and the empowerment of civil society. These would be the keys to unlocking economic potential in developing countries. In effect, it was frequently argued, the right sort of sustainable development was a higher priority for societies – and for whole regions – than security, since it created security in and of itself.

In logic it is hard to disagree with this judgement. But other structures changed drastically after the end of the Cold War and overtook the debate. Fragmentation in many regions, no longer of such interest to the old Cold War powers, exacerbated existing trends towards civil conflict and internal warfare. Crises across the Great Lakes region and in the Balkans characterised the 1990s, crises in the Levant and in south Asia the decade after 2000, and, since 2010, instability has spread across the whole of the Middle East and North Africa, the Sahel and northern Nigeria and in the poorest parts of Europe.

Important truths
The sheer immediacy of security problems has been striking in many countries rendered vulnerable by internal conflict, or conflict driven from the outside that plays on internal tensions. In these situations the essential needs of basic security appear to be paramount before sustainable development has any chance of success. Iraq has been in a state of incipient security crisis since 2011. In Syria almost half of its 20 million citizens are now either internally displaced or are refugees. Yemen has effectively split again into its northern and southern regions amid a religiously defined civil war. Afghanistan and the Pashtun areas of Pakistan remain on a security knife edge. The crisis in Libya has already destabilised neighbouring Mali to the south and feeds governance crises in the sub-Saharan territories of West Africa. The states of the Great Lakes region – Democratic Republic of the Congo, Rwanda and Burundi – are still subject to extreme ethnic tensions.

The world has learned some important truths in the conflicts of the last 25 years that bear directly on the challenges of sustainable development. One lesson is that conflict zones very quickly develop their own micro-economy. People and families continue to function by adjusting their ‘normal’ economic behaviour to whatever can support them amidst warfare. As a concomitant to the micro-economy, governmental corruption and organised crime become prevalent in the conflict zone, not just in respect to arms and war materials, but in every significant aspect of the local economy.

Ordinary citizens are normally complicit with this; it is part of their survival mechanism. Sub-state political groups emerge – indeed often proliferate – in opposition to a corrupt government. But while such groups usually engage in criminal behaviour, they are more naturally politicised than criminal gangs. They may or may not link with international terrorist organisations such as al-Qaeda, Khorosan or ISIL, but tend to engage in terroristic behaviour. They pose the political challenge that generally legitimises weak and corrupt government and invites external intervention. Three broad, overlapping factions are therefore always at play in these cases: the government and its agents; the criminal (warlord) community; and the sub-state group community.

Addressing the dynamics
Notwithstanding its good intentions and the humanitarian and advisory work it can do, the international community’s involvement in a conflict zone rapidly becomes part of the problem. It soaks up its own resources in-country, and can have the effect of creating an economic and political dependency culture. The intervening party will also find it impossible to avoid being drawn into the conflict by backing some combination of factions over others in attempts to create a national response to the fragmentation that originally triggered the conflict.

If the circumstances that lead to such conflicts are vastly different – as they inevitably are, spanning different continents, histories and cultures – the dynamics of such conflicts are nevertheless all too depressingly familiar. None of this should lead us to despair, however intractable any one of these conflicts appears to be on its own. What can the international community do to address these dynamics, and in particular where might the United Nations take the lead?

A first step would be to emphasise that what is at stake in all such conflicts is the rules-based international system. Great power politics have tended to be more obviously prominent in the way the international system has worked for the last quarter of a century, after a period of some 40 years when international institutions seemed to be growing in number and importance.

It may appear that the fabric of international order is being destroyed by the raw political competition between great powers and the prominent regional players. In fact, the underlying trends in world politics – notwithstanding areas of severe conflict and human misery – show evidence of the continuing growth of rules-based order and institutionalisation, albeit working in different ways.

As Steven Pinker has pointed out in The Better Angels of Our Nature, long-term historical trends in war and peace are more favourable than might appear from recent years. War deaths and displacements are statistically lower now than at any time in human history. 20th century conflicts killed some 110 million people. Since 1945 around 25 million people have died as a result of war, during a period when the population of the world has doubled. Broad advances in literacy, trade and investment, government administration, cosmopolitanism and shared awareness of human rights – all important attributes of sustainable development – have had a structural effect on global politics.

So the conflicts of the present era demonstrate some catastrophic departures from the historical norms, and it is important that international attempts to address these crises are set in terms of those rules and principles that should – and increasingly are – being observed. Western ground forces operating in Iraq and Afghanistan made some attempts to integrate the observance of international humanitarian law and the principles of good governance into their interactions with the societies among whom they were operating.

But success was patchy and a great deal more would have to be done in this regard, across many Western military forces, to have a significant effect in the immediate circumstances during or just after a conflict. And where Western ground forces may not be involved in fractured societies, there is a good case, as Hans Binnendijk has stated, for a “civilian surge” to help uphold both governmental competence and principles that are consistent with growing international norms.

In the economic sphere, sustainable development policies in conflict-affected regions could be directed more specifically at keeping the country or region plugged into the global economic system. The cruel fact is that the globalised economy and the triumph of the marketplace since the 1990s mean that the world economy punishes areas of conflict and instability by ignoring them. The mainstream world economy simply flows around the micro-economies of conflict. Even the notion that resources make some countries and regions vital to the economies of the great powers is difficult to sustain any longer.

Since the mid-1970s, oil prices have been highest during periods of relative peace in the Middle East and lowest during periods of conflict. Since 2011, the Middle East has been in ever-deepening conflict, while oil prices have reached historic lows in real terms not seen for over 40 years. Sustainable development policies cannot easily break directly into the micro-economies of conflict. But they can lessen their impacts and create a better exit route by championing initiatives that keep international investment flowing, maintain or reform the banking sector, promote international mentoring, and so on.

The UN’s post-2015 Sustainable Development Goals point the way and show how thinking has evolved since the seminal MDGs. In essence, what is now required is a separate but complementary exercise that establishes both the principles and some practical ideas to create new UN ‘Sustainable Security Goals’ for the next two decades.