Humanitarian aid is the developed world’s laudable yet unsustainable response to natural disasters. We need to transfer these skills and expertise to bring resilience to the most at-risk countries 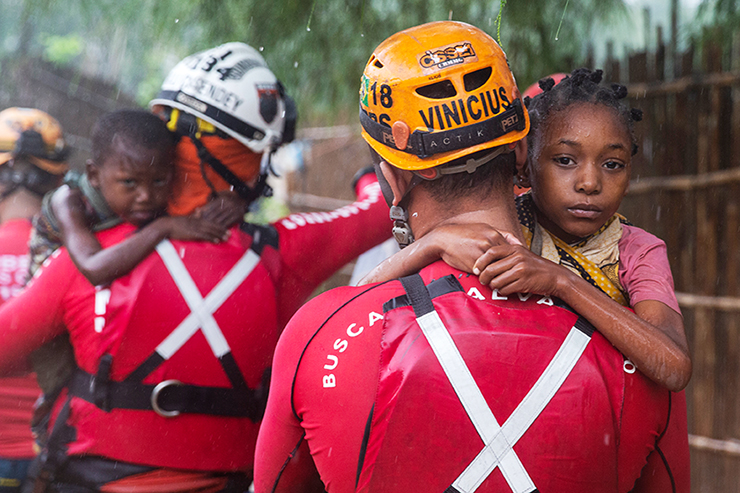 Brazilian military firefighters rescue children in Pemba, Mozambique, after the country was devastated by Cyclone Idai. The firefighters were deployed by the government of Brazil to assist UN agencies in the post-Idai search, rescue and recovery operations. © UNICEF/UN0306047/De Wet

Humanitarian aid is the developed world’s laudable yet unsustainable response to natural disasters. We need to transfer these skills and expertise to bring resilience to the most at-risk countries

The 150 million people around the world who need humanitarian assistance have a life expectancy 24 years shorter than the rest of the world. Their children are 10 times less likely to reach their fifth birthday, and of those who survive, fewer than a third will graduate from primary school.

These statistics are grim. Yet they would be far worse if not for humanitarian assistance. Thanks to donors and aid workers, the global humanitarian system is saving and protecting people on an unprecedented scale. The system is effective, not least thanks to the generous resources and thought leadership by donors.

From the Lake Chad Basin to Yemen, from Bangladesh to Syria, humanitarian agencies are saving millions of lives every year. We often provide comprehensive packages of life’s essentials to the world’s most vulnerable – from food and healthcare to emergency education and protection, especially for women and girls. We are achieving real results in a coordinated, efficient way.

The humanitarian system is more effective than ever before and continues to improve. Yet we also grapple with complex problems. As protracted crises become the norm, in a context of pervasive inequality, and as vulnerability becomes linked to climate change, the number of people at risk seems likely to increase.

This is happening while the world is becoming a better place for most. Infant and maternal mortality rates are dropping. Primary school attendance is up. And much of the world has experienced seven decades of peace. So how do we close the gap for the millions of people whose development prospects continue to lag behind? The short answer is by achieving the Sustainable Development Goals (SDGs).

To achieve the SDGs, the international system must do better to help governments tackle the root causes of chronic vulnerability. Humanitarian organisations, which are on the front lines during crises, have an important role to play, in part by strengthening their links with development professionals.

Tropical Cyclone Idai, which struck Mozambique in March, is a terrifying reminder to urgently accelerate development and strengthen community resilience. The cyclone wreaked havoc across the country and in neighbouring Malawi and Zimbabwe. Entire towns and villages were submerged. More than 1,000 people are reported dead, although the real death toll may never be known. Three million people need urgent humanitarian assistance, food, clean water and shelter. Early estimates put the recovery bill at more than $1 billion. It will take years to reconstruct Beira city, home to half a million people, and other towns and villages in the cyclone’s path.

Climate change has increased the number of massive cyclones like Idai, demonstrating the vulnerability of low-lying cities and towns. In all three countries, the storm damaged the harvest and will likely push up hunger in the coming months. Climate change is an obvious risk multiplier, forcing people from their homes, driving up humanitarian needs and threatening to set back fragile gains.

As an optimist, I argue that tackling climate change provides an opportunity to accelerate development gains. Humanitarian agencies can provide a key contribution to the efforts of national, regional and international institutions to build resilience. One way is by providing needs and vulnerability analysis, putting the vulnerable at the heart of our response.

Ready when crises strike
Within hours of Idai hitting Beira, humanitarian workers rushed in to help the Mozambique government in search and rescue missions. We provided food, shelter and survival kits, and the needs analysis for the immediate response and longer-term planning. We set up cholera treatment centres and provided vaccines to hundreds of thousands of people to help contain the cholera outbreak. We rebuilt damaged disease surveillance systems, which were early casualties of the storm but should now be fit for purpose in the future.

The UK government was among the first responders to Cyclone Idai. It sent health and emergency response workers and forklift trucks and other equipment to quickly get relief items to those in need. The UK is also a leading bilateral donor to the response, contributing £36 million to help deal with the disaster’s aftermath and urging others to step up their responses at the conference on Cyclone Idai it co-hosted at the World Bank Spring Meetings in April.

My colleagues David Beasley of the World Food Programme and Henrietta Fore of the United Nations Children’s Fund visited the worst-hit areas days after the cyclone. They aptly summarised what needs to happen next: work with the government and its people to build back better – houses, schools, health centres, roads – to avoid the same level of devastation in the future.

The enormity of the task highlights the need for national and international organisations to work together. No single government, corporation or international body can do it alone. Cyclone Idai was a stark reminder that sustainable development cannot be achieved through cycles of recurring disasters and responses. The underlying vulnerabilities must be addressed.

The 2030 Agenda and the SDGs provide a common vision for humanitarian and development actors to do just that. But we will only achieve the SDGs when crisis-affected people are no longer left vulnerable. Important steps in that direction include the UN Secretary-General’s launch in 2017 of the Joint Steering Committee to Advance Humanitarian and Development Collaboration. The Office for the Coordination of Humanitarian Affairs (OCHA) and the UN Development Programme (UNDP) are both members.

Meanwhile in Southern Africa (and elsewhere) comprehensive action must address the root causes of food insecurity and related vulnerabilities, including greater investment in shock-responsive social safety nets, such as insurance for the most vulnerable.

The UK, for example, committed to support families most affected by droughts in northern Kenya, as part of the Kenyan government’s Hunger Safety Net Programme, which will then transition to full government ownership and funding. This was included in the UK’s £160 million funding announced last year at the UN General Assembly to help countries  change to cleaner, greener energy systems, and support communities affected by climate change.

Progress, good practice
Countries like Ethiopia, Niger and Nigeria are establishing good practice in joint analysis. They are also engaged in better joined-up planning and programming to reduce vulnerabilities around food safety, displacement and climate change.

Diffa, in Niger, is the first place I visited in this job. Diffa is the poorest region in Niger, the poorest country in the world. Diffa has suffered from years of underdevelopment, chronic drought, lack of food, violence and the fallout of armed groups like Boko Haram. It has also faced an influx of some 119,000 desperate refugees from Nigeria. In many ways the challenges faced in Diffa exemplify why humanitarian and development responses must go hand in hand.

In Burkina Faso, Cameroon and Chad, we have undertaken joint needs analyses with the governments and mapped out plans to reduce poverty and hunger. The goal is to enhance health, education, gender equality, access to clean water sanitation and affordable and clean energy. These are the areas of highest vulnerability represented in the first seven SDGs.

In Somalia, good practice has emerged from the 2016 drought response, when the government, development and humanitarian organisations cooperated to stave off famine.
Somalia’s 2016 National Development Plan explicitly recognises droughts, floods and displacement as drivers of humanitarian need. Aid and development organisations are working together to reduce acute food insecurity by 2022, while increasing the number of vulnerable people who have access to basic social services and reducing the number of people affected by drought and floods.

These approaches are key to success  by 2030.

Partnerships that span UN agencies, the private sector, governments, academics and civil society combined with innovative ways of maximising their capacity are crucial for resilience.
The Connecting Business initiative (CBi), managed by OCHA and UNDP, is one example of how the private sector engages effectively in disaster risk reduction, preparedness, response and recovery.

In Haiti, the CBi network GSMA – which unites mobile operators worldwide – helps national mobile operators and humanitarian organisations collaborate with the government in preparedness planning. As such, the private sector is included from day one. Soon after it was established, when an earthquake struck, CBi sent out SMS messages to three million people telling them what to do in case of aftershocks.

Given the devastating interplay of natural disasters, underdevelopment, climate change and protracted conflict, we must promote a collective response that addresses the root causes and leads to sustainable development.

The challenges that lie ahead of us are immense. But so are the opportunities to influence positive change.