The ocean is vital to our planet’s functioning, but human activity has put its health in jeopardy. How can we help the ocean to recover and sustain our future? 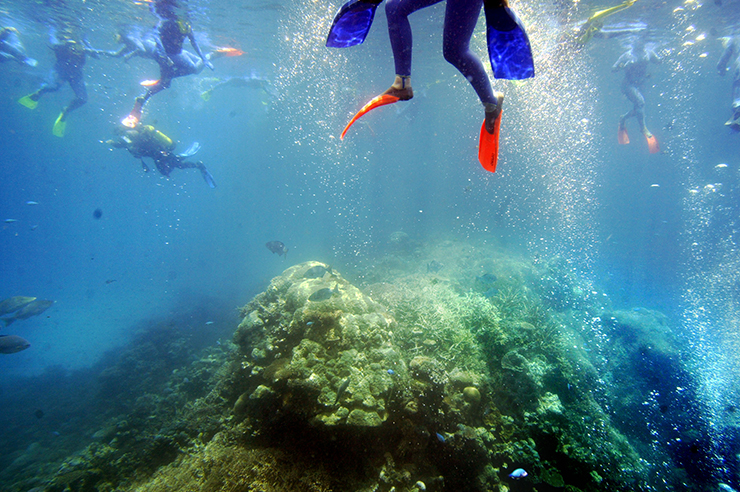 Snorklers over the Great Barrier Reef, Australia. In 2016, the reef experienced its worst-ever bleaching event, which killed a quarter of its coral. © Fairfax Media via Getty Images

The ocean is vital to our planet’s functioning, but human activity has put its health in jeopardy. How can we help the ocean to recover and sustain our future?

In a sustainably evolving civilisation, the wellbeing of current and future generations is achieved without breaching a long-term equilibrium between consumption of natural resources and their self-replenishment.

The evolution of our civilisation has taken us to the epoch of Anthropocene – Earth’s most recent, and strongly human-influenced, geological time period. At present our civilisation finds itself operating near the ‘limits to growth’. Poorer and less privileged communities are already feeling the discomfort, but eventually it will affect even those who ‘have it all’.

With a relatively small exception, humans now operate everywhere on the continents. Now we are turning to the ocean. A healthy ocean may keep our planet running for an unknown but hopefully sufficiently long period of time. But preserving its health requires knowledge – as well as immaculately executing error-free decisions. Unfortunately, for the ocean and for us, we are very far from this ideal scenario.

The current threats to ocean health are massive. They stem mostly from various kinds of pollution, alteration of the environment, intrusion into and destruction of species’ habitats, warming of the ocean, ocean acidification and unsustainable fishing. According to the first World Ocean Assessment, published in 2015, the world is running out of time for returning the ocean ecosystems to a healthy state.

Below are just some examples of negative impacts of multiple stressors on the ocean. Ocean acidification, ‘the other carbon problem’, creates a host of devastating effects. For example, it makes it more difficult for ocean zooplankton to grow, reproduce and protect themselves by building shells. Coral reefs, the cradles of biodiversity, suffer from a combination of heatwaves and acidification and are now dying on a massive scale. Due to warming from the surface and nutrient deposition, accompanied by changes in ocean mixing and circulation, the ocean loses its oxygen. Coastal megacities are now growing rapidly, especially in Southeast Asia. The pumping of underground water from aquifers, coupled with cities’ huge mass, causes cities to subside. At the same time sea level is rising: fastest in the western part of the Pacific, where sea surface temperature is also very high, attracting severe tropical cyclones. Together, these factors result in increased exposure of coastal populations in Southeast Asia to ocean-related hazards.

The phenomena occurring in the ocean due to climate change are often counterintuitive. For example, with the melting of the ice sheets, the gravitational attraction of ocean water by them reduces. This results in sea-level fall near the ice sheets and in sea-level rise at large distances from the area of melting. The biggest regional rise takes place in tropical areas, with potentially devastating effects on small-island developing countries.

The warming of Arctic waters does not lead to easier ‘grazing’ conditions for fish such as salmon and cod. This is because the fattier and more nutrient-rich cold-water copepods, on which the fish used to feed, are being replaced by skinnier ones from the lower latitudes. The chain of implications stretches far, affecting polar birds and marine mammals.

Deterioration of the environment, as well as shortages of resources and increased competition for them, increases the likelihood of various conflicts. It is very important therefore that our decisions on development and environment start to be based, as soon as possible, on scientific considerations. In 2015, the UN adopted three major frameworks aimed at turning the evolution of this planet into a sustainable mode.

In March 2015, The Sendai Framework for Disaster Risk Reduction 2015-2030 was agreed. In September 2015, the UN endorsed the 2030 Agenda with 17 Sustainable Development Goals (SDGs), including one (SDG 14) specifically on the ocean. And in December 2015, the Paris Agreement on climate change was concluded, which should help the world to limit global warming by continuously tightening national commitments. The agreement came into force in November 2016.

Ocean is at the heart of sustainable development. Producing oxygen, absorbing roughly a third of the excess carbon from the atmosphere and more than 90 per  cent of the corresponding heat, it provides huge, diverse, but largely invisible life support to humankind. To protect the ocean, we need to better understand it in its complexity. We need to know precisely, and quantitatively, its current state; anticipate its future state; and act in accordance with best scientific guidance.

Tools to achieve this include ocean observations, research, assessments and services. Working together, they create knowledge and convert it into improved ocean and planet governance, helping to inform decisions at global and local levels. The UN provides a platform for this needed collaboration. Within this system, and working with partners, the Intergovernmental Oceanographic Commission of UNESCO coordinates ocean research and capacity-building in ocean science within its 148 member states. It leads on the Global Ocean Observing System and provides other crucial services, for example tsunami warnings.

SDG 14 includes 10 targets that, combined with SDG 13 on climate change, encompass the majority of issues that the ocean faces. Addressing these challenges will strongly contribute to progress on other SDGs – for example, with regard to food, water, energy, sustainable cities, and reduction of poverty and conflicts.

Ocean information service
To plan the work on SDG 14 implementation, the UN is organising a major conference in New York on 5-9 June 2017. The solutions to be sought include new scientific developments, specifically focused on the SDG targets and their implementation and monitoring. The key requirement will be for a new science-based ocean information service for humanity.

This service’s desirable configuration might look as follows: modern ocean observations, already rather comprehensive for ocean thermodynamics in the upper 2,000 metres below sea level, would be expanded into the deep ocean, in polar ocean basins, and in the domains of ocean biology and ecosystem health – even encompassing, where possible, ocean economics and social aspects. This would provide a comprehensive and objective description of the current state of the ocean.

The Earth system models, with modern ocean modules, would provide predictions or projections of external factors affecting the state of the ocean. Ecosystem management tools would use the above data to guide ocean governance and related decisions.

The design and assembly of such a system will require significant national commitments and wide acceptance of the underlying vision and ideas. And further effort will then be needed to elaborate the solutions, promote them and turn them into a consolidated programme of action under the framework of SDG 14.

In this regard, a broad decadal campaign on ocean science for sustainable development might be highly instrumental, preferably under the auspices of the UN. Such an information service has the potential to greatly benefit the ‘blue’ economy and facilitate protection of our ocean and sustainable use of its ecosystem services.