Water, sanitation and hygiene (WASH) are essential for both human survival and sustainable development. How can we ensure that everyone has access to these basic necessities? 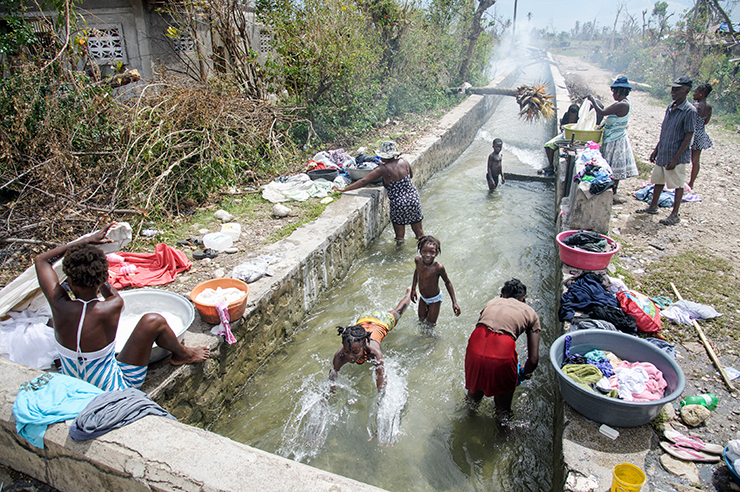 Water, sanitation and hygiene (WASH) are essential for both human survival and sustainable development. How can we ensure that everyone has access to these basic necessities?

There are seven billion people in the world today. Despite huge progress in extending access to water and sanitation over the last four decades, 2.4 billion still lack access to decent toilets, and 663 million people rely on unsafe drinking water sources.

We know what we need to do. The international community, in Sustainable Development Goal (SDG) 6, set out a clear ambition to ensure the availability and sustainable management of water and sanitation for everyone by 2030. We know how much it takes to do it: about three times more than current investment, or $114 billion every year until 2030, according to the World Bank. We know who should do it: national governments, city authorities, international organisations, the private sector and civil society.

And we also know about the costs of failure. There is now abundant evidence of the consequences of unsafe drinking water and poor sanitation on health, livelihoods and economies. It is a health crisis.

The World Health Organization (WHO) warns that some 315,000 children under the age of five die each year of preventable diarrhoeal illnesses linked to dirty water and poor sanitation and hygiene. The longer-term impacts of diarrhoea experienced in early childhood contribute to malnutrition, and render children more susceptible to other diseases, with lasting impacts on growth and development. Many neglected tropical diseases, affecting millions of people worldwide, including those in impoverished areas of wealthy countries, are also water and hygiene related.

It is an economic crisis. In 2015, lack of access to sanitation cost the global economy $223 billion – a rise of 22 per cent since 2010. Developing countries are experiencing economic losses of up to 1.5 per cent of their annual GDP.1 If every single person had access to WASH, it would lead to a projected increase of 3.2 billion productive days per year through health and education benefits alone.2

Poverty and inequality
Lack of access to WASH reinforces gender inequalities. According to UNICEF, in sub-Saharan Africa, women and girls devote an average of 200 million hours per day to collecting water – time that could be better spent on other things, including girls’ education. The lack of facilities in schools for menstrual hygiene management also contributes to girls’ absence from school, particularly after menarche. Women and girls risk attack when defecating in the open, or when they use shared facilities.

And poor WASH can exacerbate poverty and inequality. People living in peripheral neighbourhoods of cities, or remote rural areas, are less likely to have access to services than those closer to urban centres. This is because those employed in low-paid and/or temporary jobs are often obliged to rent poorly serviced accommodation.

To complicate matters further, macroeconomic shocks, political instability, conflict and large-scale migration threaten to undermine gains, especially for the poorest and most vulnerable. The United Nations estimates that 2.5 billion people will live in megacities, cities and towns by 2050. Most urban growth will occur in developing countries – overwhelmingly in smaller cities and towns that already have poor services and receive little attention or resourcing from policymakers.

On top of this, climate change poses a growing risk to the delivery of safe and sustainable services, threatening both infrastructure and the integrity of the resource base. Good data on these pressures and impacts are scarce, especially at smaller scales (i.e. towns and communities) where they are most needed for decision-making.3

Undermining progress
It is clear that if we fail to achieve SDG 6, we undermine progress towards other goals on poverty, inequality, health and wellbeing, economic growth, sustainable cities and communities, gender equality, zero hunger and quality education – almost all of the other SDGs in fact. So what is preventing action?

First, sanitation and hygiene have low political salience. At the national level, high-level commitment has often failed to translate into progress on the ground because not enough attention has been paid to understanding what drives action from politicians and civil servants.4 At the local level, municipal governments have lacked the political autonomy necessary to control local development and make decisions, as well as the means to generate revenue to invest directly in basic services.5

Second, WASH interventions have not always responded to local needs. Especially in fragile contexts, state-owned water and sanitation utilities may lack the capacity, resources and reach to provide services to marginalised people. Often, the only WASH programmes remaining are those delivered through isolated, short-term and donor-supported initiatives. This is the case, for example, in South Sudan, where years of conflict and piecemeal water and sanitation interventions have resulted in a lack of critical infrastructure, resources and capacity for WASH delivery and management.

Third, in low-income settlements, where needs are greater and formal provision is thin, markets for water and sanitation services are fragmented and dysfunctional. Customers do not have reliable information on costs and benefits when selecting their service providers, and usually end up paying more for lower-quality services. People can also be excluded from the market because they lack tenure security, because of the temporary nature of their employment, or because of discrimination based on ethnicity, religion, gender or age. For example, young Cambodian women, moving from farm to town in search of jobs in garment factories, often end up sharing unhealthy and unhygienic accommodation in informal settlements around the capital Phnom Penh.

Finally, we do not know enough about new institutional forms that could ensure sustainable and inclusive WASH in the face of rapid social and environmental change. Although state-owned utilities will remain the central actors in urban WASH, population growth is outstripping their ability to meet demand.

Non-state actors (such as communities and the private sector) increasingly have to fill the gaps. In contexts where institutional roles and responsibilities are unclear and limited, this can generate challenges, but also bring opportunities. In Maputo, Mozambique for example, after years of negotiations, institutional reforms now allow the inclusion of small-scale water providers as part of a delegated management arrangement with the utility.

To overcome these obstacles, we call for: