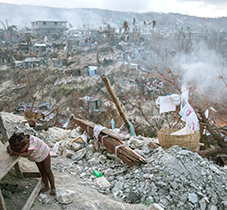 On 10 October 2016 in JÈrÈmie, Haiti, a toddler rests near collapsed homes on top of a hill. One week after Hurricane Matthew, as schools re-open across the country, more than 100,000 children will be missing out on learning after their schools were either damaged or converted into shelters.

Hurricane Matthew passed over Haiti on Tuesday October 4, 2016, with heavy rains and winds. While the capital Port au Prince was mostly spared from the full strength of the class 4 hurricane, the western area of Grand Anse, however was in the direct path. The cities of Les Cayes and Jeremie received the full force sustaining wind and water damage across wide areas. Coastal towns were severely damaged as were many homes in remote mountainous regions. International relief efforts are underway to provide food water and shelter to the people affected by the storm.

An estimated 500,000 children live in the Grande Anse Department and Grand South Department in southern Haiti, the areas worst hit by Hurricane Matthew. UNICEF had prepositioned emergency supplies with national authorities to reach up to 10,000 people. On 8 October, six water trucks arrived in Jeremie and Les Cayes, the respective capital cities within the Departments. Additional water and sanitation supplies, such as water purification tablets, water bladders and plastic sheeting, have been dispatched to the most affected departments in the westernmost tip of Haiti. As of 10 October, UNICEF delivered blankets, buckets, water purifying equipment and cholera diagnostic kits.