Now is the time to act 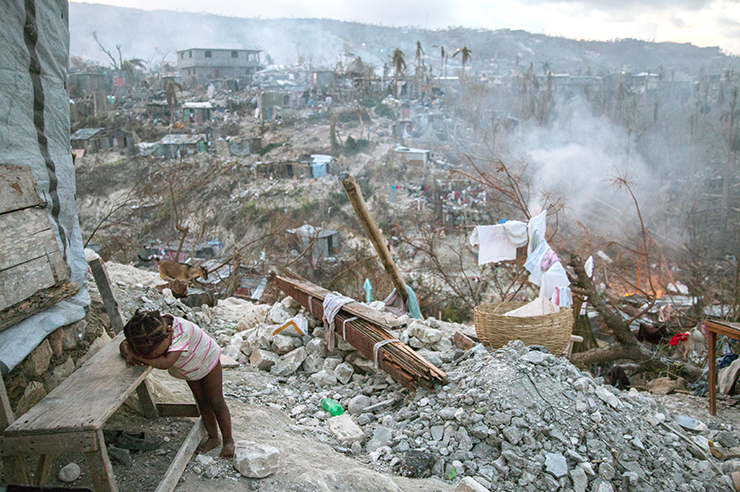 Haiti, October 2016, the aftermath of Hurricane Matthew. In the SDGs’ first 1,000 days, the focus needs to be on those most at risk of being left behind. © LeMoyne/UNICEF

Now is the time to act

It is just over a year since the ambitious 15-year agenda of the Sustainable Development Goals (SDGs) was launched: a global blueprint to “promote social progress and better standards of life in larger freedom” in the memorable words of the UN Charter.

This is a crucial period for the SDGs. According to the World Bank and think tanks like the Overseas Development Institute, if we do not see concrete steps taken during the first 1,000 days, then the outlook for their achievement will be bleak. Strong action is needed now if we are to: increase momentum towards the targets that are within reach – on poverty and deforestation, for instance; upscale efforts to meet those where progress has been slow (e.g. hunger and maternal mortality); and turn the tide in the areas where the world remains seriously off track, notably climate change and inequality.

Action has started. As you will see in the pages of this publication, around the world, even in the most trying of circumstances, attempts are underway to implement the SDGs – some ambitious, some imaginative, all integral to the success of the project.

Yet there is no shortage of reasons to be fearful. From the rise of xenophobia to seemingly intractable conflicts and the lowest ebb in big power relations for several decades, all signs point towards a dangerous and fragmented end to the decade.

Syria’s civil war has set back its progress by some 35 years. Violence has brought famine to parts of Nigeria – a middle-income emerging economy. Global displacement and the inadequate response of many governments have put development gains at serious risk, with over 65 million people forced to flee their homes facing an uncertain future.

Meanwhile, narrow nationalism risks undermining American and European commitment to the goals. The new US administration has signalled its intention to withdraw from the Paris Agreement on climate change and has frozen funding to development NGOs that offer abortion counselling or advocate abortion as a family-planning option, even if the money is spent on other crucial services. In the UK (the second-largest donor after the US) there is increasing pressure to reduce aid spending. Earlier this year, a misleading tabloid campaign appeared to influence the decision to cut aid to a girls’ rights NGO in Ethiopia.

First 1,000 days
Against this backdrop, it is encouraging that we have in António Guterres a highly competent diplomat at the helm of the United Nations. UNA-UK was at the forefront of a global campaign to reform the selection process to secure the best possible person for the job. Mr Guterres has a proven track record in conflict diplomacy and fundraising, and a reputation as a passionate advocate for the vulnerable. With the world in the grip of the most significant displacement crisis since records began, his background as UN High Commissioner for Refugees is an asset.

Our ability to meet the SDGs is intertwined with our ability to deal with this crisis. The UN’s ‘three pillars’ – peace, development and human rights – are mutually reinforcing. Guterres’ early decisions to prioritise work on peace and security and to increase the Secretary-General’s capacity for mediation reflect this.

In these crucial first 1,000 days, states must not prioritise low-hanging fruit, as many did with the Millennium Development Goals, the SDGs’ predecessors. They must target those groups most at risk of being left behind, such as refugees and migrants, and concentrate on the most transformational interventions, which may relate to Goal 16 on just, peaceful and inclusive societies, rather than more traditional development areas.

States should also recognise that the SDGs are shared, universal goals. Warm words about partnerships are not enough. A broad coalition uniting governments, international organisations, the private sector, civil society and all of us, as global citizens, is needed. So too is domestic action by rich countries, on which progress in some of the most elusive targets, such as reducing waste, depends.

And states must work hard to ensure that the post-1945 international system survives this turbulent time in global affairs. Despite the horrific headlines that dominate our screens, the world has, by and large, made enormous strides in terms of development over the past 70 years. It has also managed to avoid all-out global conflict.

Eschew insularity, embrace cooperation
This system is now under threat. Governments – and publics – must eschew insularity and embrace the need to strengthen global cooperation and institutions. This should include supporting Mr Guterres in revitalising the organisation’s role in peace and security, where it can make a unique contribution. Given heavy resource constraints, it will need to step back in other areas to achieve this.

Development is the obvious candidate. Over the lifespan of the SDGs, the UN should move away from direct delivery on the ground, where it is no longer always the best-placed actor, and focus on encouraging, advising and monitoring states and other implementers. As the only UK charity devoted to strengthening the UN, UNA-UK will continue to support this endeavour, calling for UK leadership, for UN development reform and for public engagement.

This publication, the latest volume in UNA-UK’s global development goals series, is an integral part of this programme. We bring together authors – from the UN, national governments, business, academia and civil society – to provide an appraisal of the SDGs and the context for achieving them, as well as evidence-based recommendations on implementation.

What emerges is a sense of the challenges created by the interplay between complex factors: inequality; instability; climate change; political, social and cultural pressures; and, not least, the global economy. These are challenges which the UN will be indispensable in meeting, but which it cannot meet alone.