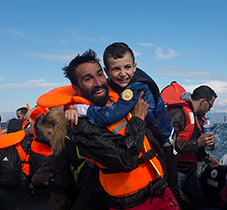 On 30 September,volunteer Kinan Kadouni, 26, and the boy he is carrying, both refugees from the Syrian Arab Republic, laugh amid other newly arrived refugees, and the volunteers helping, following their arrival on the shores near the village of Skala Eressos, on the island of Lesbos, in the North Aegean region. The Aegean Sea (part of the Mediterranean Sea) is now becoming especially rough as the first winter storms begin. As a result of dehydration and the cold, many refugees were seasick, with some conditions life-threatening.

Mr. Kadouni left his home in Saragep, Syria five years ago. Mr.Kadouni successfully filed for refugee status, and today lives in Belgium, where he studies Flemish at school and volunteers for the Red Cross. While Kinan was waiting for his asylum application to be completed over 2.5 years, he stayed in a refugee center that was run by the Red Cross.

ìThey gave me a lot when I was living there, and now its time for me to give them something back.î Mr. Kadouni said in an interview. Mr. Kadouni flew to Greece in the middle of September to volunteer on the beaches, welcoming and assisting refugees after they landed on the island Lesbos.

A UNICEF photographer that was working on assignment in Lesbos captured Mr. Kadouni carrying a boy from the Syrian Arab Republic, both beaming, moments after a boat landed on the coast on a day that had particularly rough waters. After posting the photograph on various social media, viewers identified Mr. Kadouni, who got in touch with the photographer. Mr. Kadouni remembered the moment vividly.

ìThis lovely boy made my day with his nice smile. When every one else was afraid, this boy was laughing.î Mr. Kadouni said, ìWhen their boat arrived, everyone looked pale and afraid and this boy was the only one with a big smile, and that is how he drew my attention immediately. I went directly him and got him out of the boat and we started playing and laughing… I always try to welcome them with smiling f