A new era for development

Making the SDGs count will require global cooperation, public involvement and effective institutions that transcend the buzzwords of “partnerships”, “engagement” and “reform” 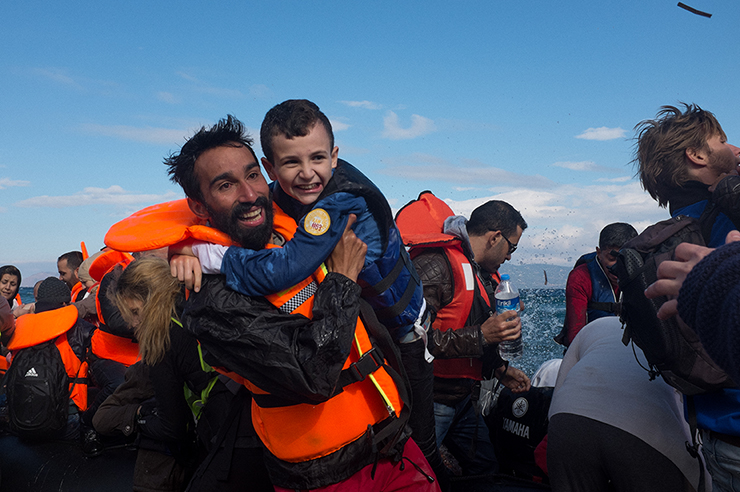 On the island of Lesbos, Greece, a newly arrived refugee from Syria is carried by a volunteer, himself a former refugee. The UN’s role in supporting refugees is one of the most visible reminders of why the UN is needed
© UNICEF/UNI197517/Gilbertson V

A new era for development

Making the SDGs count will require global cooperation, public involvement and effective institutions that transcend the buzzwords of “partnerships”, “engagement” and “reform”

The adoption of the Sustainable Development Goals (SDGs) and the Paris agreement on climate change in 2015 – a year marked by instability and violence – is testament to the UN’s enduring ability to forge global solutions.

Since 1945, the UN has worked to realise the vision expressed in its Charter of “social progress and better standards of life in larger freedom”. Most people today live longer, healthier and freer lives. For all their flaws, the Millennium Development Goals (MDGs) were arguably the most successful anti-poverty initiative in history. Over the past 15 years, the goals have served as a development blueprint, generating programmes and funding that have helped to lift over a billion people out of extreme poverty, fight hunger and boost health and education.

The extent to which the UN deserves credit for these developments is debated. But there are areas where its impact is obvious, in the targeted campaigns on maternal and infant health and on school enrolment for example. Less successful areas – such as gender equality and a fairer trade system – are invariably those that require greater political will and cultural compromise, and broader social and structural transformation.

As we embark on the SDGs, the context for progress is dramatically different from that of 2000. Today, we are witnessing the fading effect of the UN’s guiding principles in restraining nationalistic ambitions, as well as rising big power tensions and cross-border extremism. Recent conflicts have broken the 70-year downward trend in casualties and contributed to the biggest displacement crisis since records began.

Global economic power has shifted east and south, and financial volatility has triggered crises on all continents. Twenty years ago, 93 per cent of the world’s poor lived in low-income countries. Now, the Institute of Development Studies reports that 72 per cent are in middle-income countries. This should generate a re-think in development assistance and trade/investment approaches.

Inequality has emerged as a key challenge. While the number of people in the working middle class (living on more than $4 a day) almost tripled between 1991 and 2015, the gap between rich and poor has barely narrowed. This year, Oxfam reported that the world’s richest 62 people own as much as the poorest 50 per cent. Many experts acknowledge that lifting the ‘next billion’ out of extreme poverty, and improving the lot of those who fall just outside that definition, will be much harder.

Aid – as a concept and practice – is increasingly challenged, driven by domestic pressures in donor countries, but also by calls for transparency and results by people in recipient countries. It is also a much smaller element of the funding mix, as foreign direct investment, remittances and portfolio equity flows have grown.

The impact of conflict, human rights abuses, poor governance and climate change on development is now more widely understood and accepted. This is clear from the range of issues covered by the SDGs.

The number of development actors, too, has increased. New institutions, regional organisations, companies and NGOs are now heavily involved in policy-making, delivery, financing and evaluation. In many environments, they are the leading actors.

And then there is the growing voice of the people, who are making themselves heard by taking to the streets, to social media and movements, and to the ballot box, where populist leaders are increasingly gaining ground.

This latest volume in UNA-UK’s global development goals series brings together authors – from the UN, national governments, business, academia and civil society – to provide an appraisal of the SDGs and the context for achieving them, as well as evidence-based recommendations on implementation. From the range of issues covered, four themes emerge:

What role should the UN play in this? The last two articles in this volume focus on institutional change and leadership. Both are vital to addressing the reforms needed, as well as the bigger question of whether the UN should move away from on-the-ground delivery over the next 15 years and focus on capacity building, advocacy and funding.

In this regard, the appointment of a new Secretary-General in 2016 offers opportunities. UNA-UK has played a leading role in 1 for 7 Billion – the global campaign for a selection process that genuinely engages all UN member states and civil society.

International peace is invariably at the top of any Secretary-General’s agenda, but this has been reinforced by the selection process, which has hitherto put the decision in the hands of the Security Council, guided by five rich military powers, instead of the wider UN membership that is more development-oriented. This time, broader involvement, including by civil society and the media, is likely to result in more emphasis on development, particularly in the first ‘implementation’ year of the SDGs.

A better selection process, along with a single term of office, could give the next post-holder a stronger mandate to deliver on these commitments, and free her or his hand in making high-quality appointments, particularly a Deputy Secretary-General who could focus on the development system.

Secretary-General Ban Ki-moon was instrumental in galvanising support for the SDGs. It is only fitting that his successor takes up the mantle by generating serious debate on the structural and operational changes needed at the UN to achieve them.