A new development approach in action

The interconnectedness of the 17 SDGs mean development projects can no longer be designed or judged with a single benefit in mind. This is how Inter-American Development Bank is responding in Latin America and the Caribbean 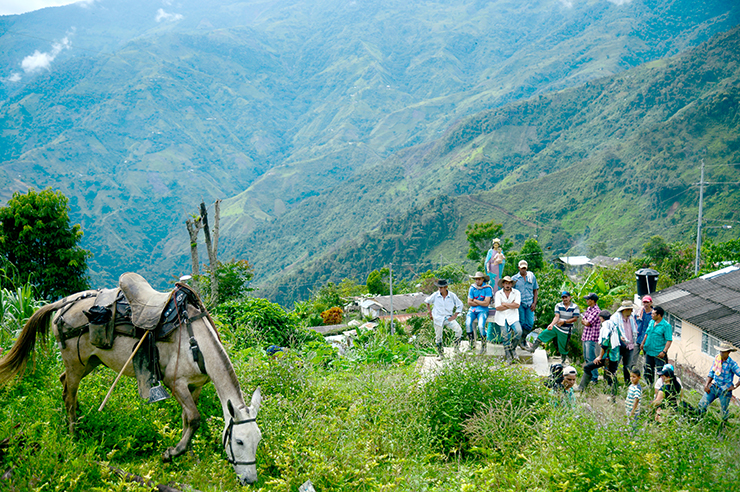 A new development approach in action

The interconnectedness of the 17 SDGs mean development projects can no longer be designed or judged with a single benefit in mind. This is how Inter-American Development Bank is responding in Latin America and the Caribbean

The 2030 Agenda and the Sustainable Development Goals (SDGs) that underpin it, together with the Paris Agreement, represent the most ambitious development endeavour ever undertaken by the international community. In aiming to improve lives and protect the planet at the same time, the 2030 Agenda moves beyond pursuing individual goals and targets to recognising that development requires a multidimensional approach.

Challenges such as civil conflict, forced displacement, environmental degradation, poverty and inequality are almost always mutually reinforcing. So are their solutions, which require a holistic approach to be effective, embracing economic, social and environmental dimensions. In this sense, all 17 SDGs are interconnected. For instance, maternal mortality has an impact on children’s education and health, which in turn impacts productivity and thus poverty reduction and the environment.

Sustainability in Colombia
The Inter-American Development Bank (IDB) Group has stepped up its efforts to contribute to this ambitious agenda, both individually and with partners. One project that highlights how the IDB Group is applying a multidimensional and interconnected approach to supporting the SDGs in the region is a $100 million loan to support the Sustainable Colombia Program (SCP). Approved in 2017, the SCP targets 170 municipalities affected by the country’s long-running civil conflict, which came to an end in 2016.

Colombia’s post-conflict zones have experienced disproportionate environmental destruction and poverty. In 2014, they had a multidimensional poverty index of 54.7 per cent, compared with the country’s average of 45.6 per cent. In 2015, 89 per cent of the country’s deforestation took place in these zones. The IDB Group’s loan contributes directly to a range of goals including economic development (SDG 8: decent work and economic growth), climate change (SDG 13: climate action), and social equality (SDG 10: reduced inequalities).

Furthermore, as part of the SCP, the loan contributes to a systemic approach to addressing the SDGs including restoration of natural resources (SDG 15: life on land) and development of sustainable sources of income for residents (SDG 12: responsible production and consumption).

Through the SCP, Colombia and the IDB Group are not only combating hunger, but are also striving to achieve food security and improved nutrition through sustainable agriculture. Likewise, the SCP seeks to reduce inequality while promoting peaceful and inclusive communities and institutions.

Strategic alignment with the SDGs
Since the discussions leading up to the 2030 Agenda, the IDB Group has underscored the critical importance of ensuring that developing countries play the leading role in shaping and delivering the SDGs. Countries must first translate the goals into meaningful country-specific indicators and targets, and then design and implement the policies and programmes needed to reach them. As both a proactive and demand-driven institution, the IDB Group is well positioned to support its clients in this process. This is down in large part to its strategic framework, which was updated when the 2030 Agenda was being discussed and initiated.

The latest Update to the Institutional Strategy identifies three key development challenges that need to be addressed to preserve and continue to advance development gains in the region: i) social inclusion and equality; ii) productivity and innovation; and iii) economic integration. At the same time, the Strategy cites three cross-cutting issues that must be addressed when working on these challenges: i) gender equality and diversity; ii) climate change and environmental sustainability; and iii) institutional capacity and the rule of law. As shown in Figure 1, each of these challenges and cross-cutting issues is aligned with at least one of the 17 SDGs. 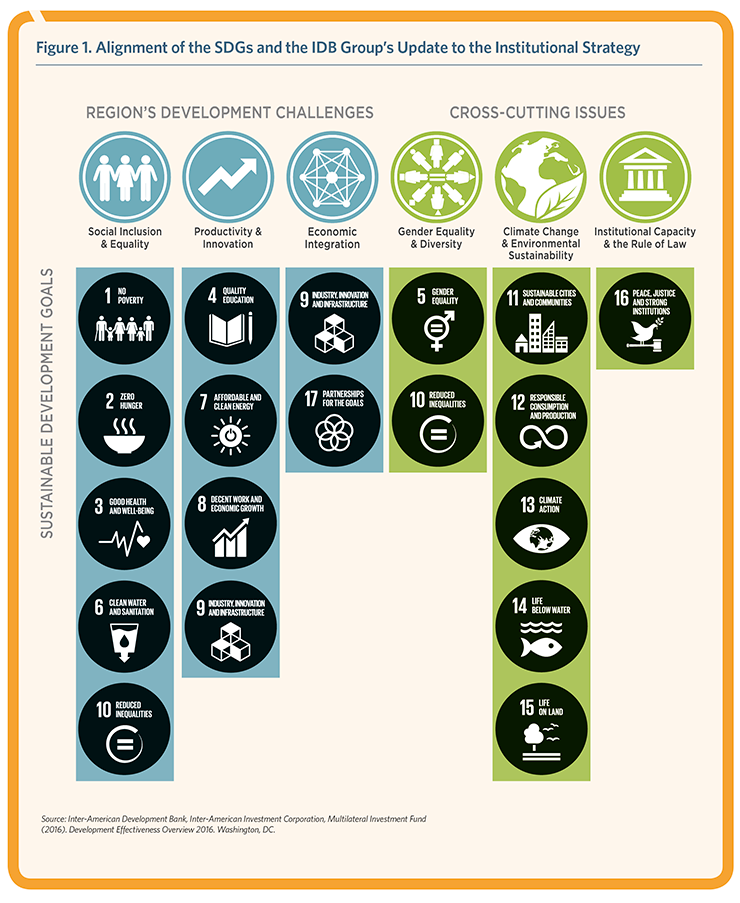 Strategic monitoring of contributions to the SDGs
The relationship between the SDGs and the Update to the Institutional Strategy is depicted in greater detail in the IDB Group’s Corporate Results Framework (CRF). This specifically looks at how the organisation’s projects are contributing to the achievement of the SDGs, by examining the results of projects in execution and by reviewing the areas targeted by new projects as they are approved.

The updated CRF draws on the draft indicator framework for the SDGs released by the 2015 UN Inter-agency and Expert Group on SDG Indicators. The CRF identifies the SDGs that are most closely aligned with each of its Regional Context Indicators, which highlight the region’s long-term development progress; and Country Development Results Indicators, which report on outputs and outcomes supported by IDB Group-financed projects. IDB Group’s reporting on the results of the operations it supports also sheds light on IDB Group’s contribution to the SDGs.

However, identifying the specific SDGs to which a project contributes is not as simple as it sounds. It goes far beyond just looking at the sector in which a given project is working. Instead, it demands an individual assessment of each project based on its unique objectives and target population. In fact, a single project often contributes to several SDGs, as in the case of the SCP.

To share the results of this analysis, the IDB Group has recently launched a dedicated 2030 Agenda webpage. Users can now see how IDB Group interventions contribute to the different SDGs.

Coordinating stakeholders for Costa Rica
The holistic nature of the 2030 Agenda implies a vision of regional and global public goods that requires coordination among multilateral development banks (MDBs) and stakeholders, especially the private sector.

Multilateral organisations such as the IDB Group are well positioned to facilitate this process. MDBs are viewed as trusted brokers, with the credibility to bring together diverse stakeholders from government, the private sector and civil society.

A good example of systemic, multi-stakeholder collaboration at the project level is the recently completed Reventazón Hydroelectric Project in Costa Rica. This is an IDB Group-led initiative worth $1.345 billion that benefited from a $250 million IDB Group sovereign-guaranteed loan; an A/B loan package (in other words, a loan offered in partnership with another financial institution) valued at $335 million from IDB Invest (the Group’s private sector lending window); and an additional $579 million from other MDBs and investors, including the International Finance Corporation.

Given the level of resources required for Reventazón, securing the involvement of a wide range of parties was critical to the project’s successful financing and execution. The hydroelectric plant now supplies 10 per cent of Costa Rica’s electric generation capacity (SDG 7: affordable and clean energy). It is also a major step towards that country’s goal of carbon neutrality (SDG 13: climate action), and includes a jaguar corridor to protect critical habitats adjacent to the project site (SDG 15: life on land).

Joint reporting
In addition to project-level cooperation, MDBs have taken steps to work together by cooperating on joint measurement and reporting of critical components of international development.

For example, the IDB Group has been collaborating with other multilaterals on harmonising methodologies to track the climate finance and private investment they mobilise, and on improving and refining tools, operational policies and business processes to increase the efficiency and effectiveness of interventions (see the SDG webpage mentioned above for more details).

In addition, the IDB Group has set up a public–private coordination team that is looking to identify synergies and business opportunities to enhance its engagement with the private sector and catalyse more private sector finance.

The IDB Group’s framework for collaboration with the private sector around the SDGs has also been revamped on several fronts. All non-sovereign guaranteed windows have been consolidated into IDB Invest and capitalised with $2.03 billion, with the aim of mobilising over $10 billion in the next 10 years. In addition, the IDB Group established the NDC Invest platform. This provides a one-stop shop to help countries access the resources needed to translate national climate commitments under the Paris Agreement into concrete investment plans and bankable projects.

With more than five decades of hands-on experience in Latin America and the Caribbean, the IDB Group has acquired unique technical and operational expertise about the development challenges and priorities of each of its borrowing member countries. The IDB Group stands ready to leverage its financial resources, technical expertise and multilateral coordination in support of its public and private sector clients to achieve the SDGs and implement the 2030 Agenda in the region.