Businesses are critical to achieving the SDGs. We need industry leadership, government regulation and civil-society activism if they are to deliver for people and planet, as well as for profit 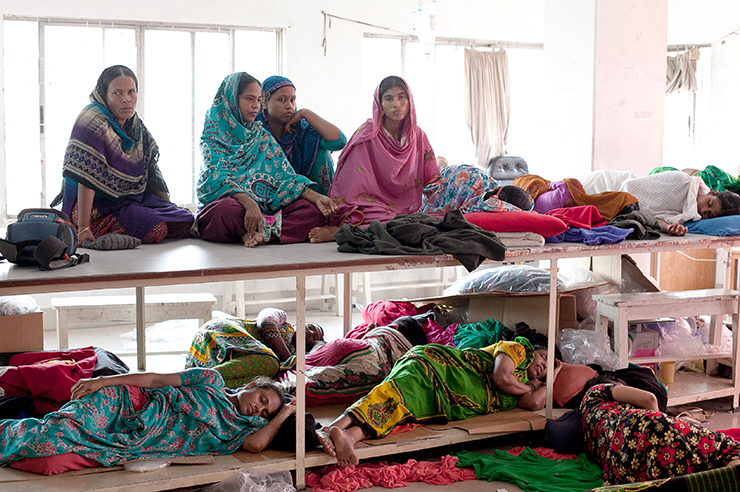 Women, protesting over unpaid wages, rest during a hunger strike at a garment factory in Dhaka, Bangladesh. Until the Rana Plaza fire in 2013, the developed world largely turned a blind eye to the suffering caused to feed its consumption. © Getty Images/Allison Joyce

Businesses are critical to achieving the SDGs. We need industry leadership, government regulation and civil-society activism if they are to deliver for people and planet, as well as for profit

The Sustainable Development Goals (SDGs) are an extraordinary achievement. Governments, business and civil society have come together to transform all our societies towards shared prosperity and security, leaving no one behind.

A key shift from the previous Millennium Development Goals has been the inclusion of business as a key partner – of both the UN and governments – in this endeavour. This change reflects the extraordinary rise in the power of business in the last 40 years.

The shift holds huge potential for global development, but also severe risks. Many believe that respect for human rights by businesses will be the litmus test of their willingness to transform their own operations to deliver sustainable development.

Companies should ensure that they respect human rights across their immediate operations and supply chains. Only then will the envisioned massive investments and megaprojects – the foreseen ‘$12 trillion in market opportunities’ that the SDGs offer – deliver real benefits for the communities and societies they are meant to serve.

A fast – and fair – transition
One example is renewable energy firms. They will be at the heart of our urgent transformation to a low-carbon economy – vital for the achievement of access to affordable and clean energy. We need a fast, but also fair, transition. At the Business & Human Rights Resource Centre (BHRRC), we have sounded the alarm about a growing number of allegations of abuse by renewables companies, especially from indigenous and tribal peoples, regarding land and water grabs.

For instance, in the Isthmus of Tehuantepec in Mexico, indigenous communities have denounced concessions granted by the government for wind power projects. People are saying these concessions were authorised without free, prior and informed consent. Some community members who have demonstrated against these projects have faced death threats, violence and detention.

After her visit to Mexico in November 2017, the UN Special Rapporteur on the rights of indigenous peoples made it clear that this is not an isolated case: “I heard consistent complaints about economic development projects that… led to land dispossession, environmental impacts, social conflicts and criminalisation of indigenous community members opposing them. These include mining, oil and gas, hydroelectric, wind, solar, infrastructure, tourism and agro-industrial projects.”

Renewable energy companies and their investors must act urgently to put human rights due diligence upstream in their planning. Otherwise, they will create irreparable damage to their social licence to operate. They will also lose the trust of the very communities that are essential for stable and remunerative investment.

Governments must also sharpen their thinking to regulate this fast-growing sector effectively – not to slow investment, but to prevent abuse and incentivise community benefit.

Workers’ rights, shared prosperity
Another crucial issue for achieving the SDGs will be companies’ approach to labour rights – from eliminating modern slavery to the provision of decent work and a living wage.

An estimated 40 million people are caught in modern slavery and there are 152 million child labourers. Almost every supply chain has modern slavery within it somewhere. A priority, therefore, must surely be to deliver the SDGs on inequality and workers’ rights.

There are a cluster of leading companies that are taking bold action to eliminate forced and child labour and trafficking from their supply chains. KnowTheChain, an organisation that supports businesses in tackling forced labour, has highlighted the work of companies such as Apple, Hewlett Packard, Adidas, Gap, Unilever, Coca-Cola, Nestlé and Marks & Spencer in transforming their due diligence to identify key risk areas and find sources of abuse. While these firms are leading the way, the vast majority of corporates appear far behind.

Our recent survey of the largest companies’ compliance statements for the UK Modern Slavery Act showed that 69 per cent of firms score four out of ten or below. Almost half did not meet the minimum standards of the Act. These companies must learn quickly from the best practice of their leading peers. Governments should insist on mandatory transparency and due diligence, and provide incentives to responsible business through public procurement.

Most people working in the world would benefit from the SDGs if companies transformed their business models to provide decent work and a living wage in their operations and supply chains. This is not easy, but it’s also not rocket science.

The 2013 Rana Plaza factory collapse in Bangladesh killed 1,135 (mainly female) workers. As a result, more than 200 fashion brands and their manufacturers signed an accord with trade unions to make the factories they source from safe for workers. Over 600 factories have completed 90 per cent of the agreed improvements in fire and safety precautions to create decent workplaces. There is more to do, but action to ensure decent workplaces after the tragedy has shown what can be done.

What appears to be much harder to achieve is paying workers a living wage – despite the transformational impact on workers’ lives. In an open letter on the SDGs in 2016, Professor John Ruggie, former UN Special Representative on business and human rights, said: “Living wages support families and enable the education of children.”

For the millions of women workers in garment factories across South and Southeast Asia, a living wage would allow them the right to housing, health, food  and a little leisure. But for the vast majority of these workers, take-home pay is set by a minimum wage – at or below poverty levels. In Turkey, for example, many thousands of Syrian refugees are paid just half the minimum wage to make clothes for the high streets of Europe.

This situation will only change when: i) workers are given freedom to organise; and (ii) fashion brands collaborate with trade unions to agree that all will pay the living wage – the Action, Collaboration, Transformation initiative is working to achieve this in markets such as Cambodia.

Governments must also enforce a minimum wage that meets a living wage level. In this way, all parties would deliver the promise of transformation that the SDGs were fashioned to create.

Can business embed the SDGs?
So, how can we encourage and insist on these core efforts by business to deliver the SDGs? It will require action on several fronts. First, we will need an assertive civil society to expose abuse and propose reform. Second, leading-edge companies and investors must show the way.

They will have to step out from the pack and demonstrate what is both a moral imperative in their operations and also commercially viable. Third, governments must be bold enough to insist that companies deliver more for the common good.

CEOs report that a key factor in shifting their thinking is when they are ranked on their human rights performance. The Corporate Human Rights Benchmark ranks 100 of the largest global companies in three high-risk sectors: agricultural products, apparel and extractives. This provides leading companies with reputational reward, and laggard companies with reputational risk. We need investors to use rankings to start making capital cheaper and more accessible to companies that reduce their material human rights risks.

Governments, meanwhile, must raise the bar of minimum corporate behaviour towards fuller respect for human rights, through regulation and public procurement. The SDGs have made explicit the inclusion of business as a key development actor. The goals have thrown down the gauntlet to our societies to repurpose business to deliver both sustainable development and returns to shareholders.

This will require companies to move away from a singular focus on maximising short-term shareholder value. Instead, they must start working with – and for – a wider group of stakeholders: their workers, customers and the communities where they operate.