We need actions and words

After years of discussion on the SDGs, it is tempting to say we should just get on with it. But prioritising delivery should not obscure the need for longer-term analysis 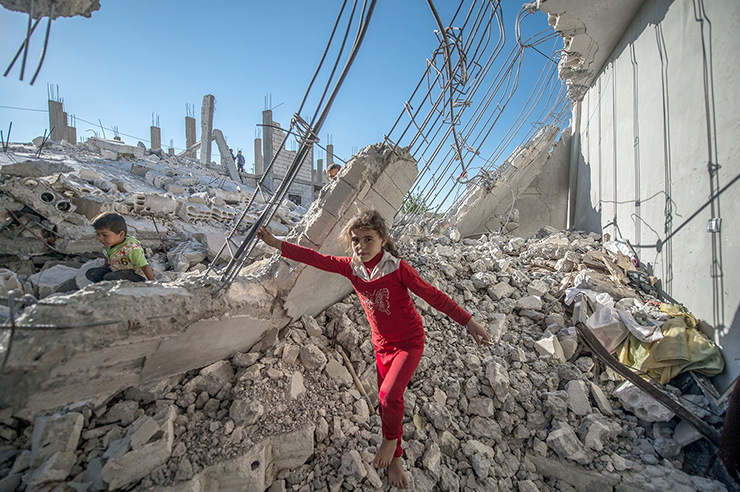 Children in the rubble of a building in Jarabulus, one of the few places in Syria where work on reconstruction has started following the expulsion of ISIL. Peace and security and human rights work should be a greater focus for a reformed UN. © Halil Fidan/Anadolu Agency/Getty Images

We need actions and words

After years of discussion on the SDGs, it is tempting to say we should just get on with it. But prioritising delivery should not obscure the need for longer-term analysis

By Natalie Samarasinghe Chief of Strategy, Office of the Special Adviser on the UN's 75th Anniversary Claire Manuel,

The Sustainable Development Goals (SDGs) will turn three this year. To many of us working on international issues, it feels like they’ve been around for a lot longer. Don’t get me wrong – the emphasis placed on consultation and negotiation was necessary and commendable, especially when compared to the back-of-the-envelope genesis of their predecessors, the Millennium Development Goals (MDGs).

That the SDGs inspired the largest-ever global public survey, and that states gathered in Addis Ababa to discuss financing ahead of their adoption represents a welcome evolution in planning and participation.

But after years of speeches, meetings, reports, blogs and Buzzfeed quizzes (“Can we guess which SDG you are most passionate about?”), it feels like we need to stop talking and start doing. With 17 goals and 169 targets to deliver by 2030, surely we need to stop refining indicators at some point. As the UN Deputy Secretary-General states in her powerful foreword: “We know the clock is ticking, and the pace of progress is insufficient to fully meet our ambition.”

This publication seeks to push things forward. Our authors – experts and practitioners from international institutions, business, academia and civil society – set out examples of projects and approaches that have produced results. This was the brief we gave them: don’t re-state problems or offer abstract solutions. Show us how it’s done. And they have, from building the innovative vaccine alliance, Gavi, to generating multi-stakeholder finance for hydropower in Costa Rica; from transforming Cape Town’s water demand management to helping small businesses in France set decarbonisation targets.

The bigger picture
What is clear from their contributions, though, is that while case studies are important, we must continue to grapple with bigger-picture questions and to analyse the tools and resources necessary to scale up what is working well and adapt it to other contexts. For instance, while much attention is placed on technological and policy innovation, the SDGs’ 15-year timeframe is unlikely to be sufficient to see these changes, which require upfront investment, make a difference on the ground.

This reflects the broader challenge of goal-setting: policymakers must balance the desire to demonstrate progress with the need to plan for the future. Data is a good example. According to the Center for Global Development, about half of the 232 SDG indicators lack acceptable country coverage and this isn’t purely a case of developing countries needing more capacity. Of the 72 states that don’t collect information on the proportion of people living below the international poverty line, more than half are high-income countries. Clearly, we do need to keep refining how we measure success.

Then there’s finance. Optimistic predictions about private finance remain way off track. Global private capital flows are still about a quarter of what they were in 2007, and low-income countries continue to receive a tiny share (1.7 per cent in 2016) of total flows to developing states. Meanwhile, warm words on partnerships and inclusivity have yet to be adapted into evidence-based strategies that work in different contexts. And many rich countries seem reluctant to embrace the universality of the framework. Too few have internalised their obligations to deliver the SDGs within their borders.

What we need is a sort of SDG mindfulness. This should combine a ruthless focus on the present, where every opportunity is taken to make progress, with steps to address the longer-term challenges, continually re-evaluating knowledge and practice to lay the foundations for the world we need to become by 2030.

Alignment with the SDGs
UNA-UK was heartened to see the UN Secretary-General adopt this approach in his recent report on UN development reform, released in January 2018. It sets out proposals that can be put in motion straight away, such as improving coordination between regional bodies, alongside more fundamental changes – reinvigorating the UN’s Economic and Social Council, for instance, which has never lived up to its founding potential.

It also states that all UN action on development will be aligned with the SDGs (the MDGs were never integrated in the same way). It outlines six new mechanisms for strengthening partnerships with the private sector and civil society, as well as a new funding compact, to be agreed by the end of this year. The compact would see Member States give UN bodies greater flexibility over their development funds – at present, less than 22 per cent are core. In return, measures to increase transparency and accountability are proposed.

UNA-UK applauds the comprehensive nature of these reforms. If implemented, they have the potential to transform the organisation, although securing buy-in remains a challenge. We hope that the next iteration of proposals will build on this ambitious approach, and set out how the UN could tackle two broader obstacles to realising the SDGs:

Time for action
Addressing these deficits will be enormously difficult, and there is little bandwidth for further reform proposals at present. We are already one fifth of the way through the SDG timeline: it is time for action, not blue-sky thinking.

But successful implementation of the goals will also require taking a deeper look at why some things are working and others are not. Often, the answers will be structural, and we must not shy away from seeking large-scale reform. If we are to transform the world, we need to transform our flawed but indispensable world organisation.