In response to the COVID-19 pandemic, some world leaders have further instrumentalised the supposed tensions between advancing national interests and protecting global goods. We must find new ways of cooperating that encourage countries to pursue both 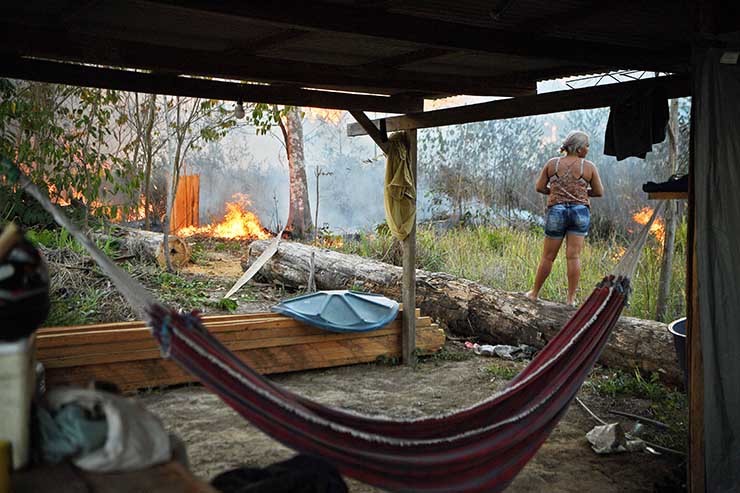 A farmer views the progress of a fire that they set in an area of Amazon rainforest in Para state, Brazil. © Carl De Souza/AFP via Getty Images

In response to the COVID-19 pandemic, some world leaders have further instrumentalised the supposed tensions between advancing national interests and protecting global goods. We must find new ways of cooperating that encourage countries to pursue both

Is there a conflict between preserving global goods and advancing national interests? We address this question at two levels: the institutional and the political. Without discarding the importance of national frameworks and policies to deliver public goods, we argue that pitting the national and global spheres against one another creates a false dichotomy, particularly when it comes to environmental and climate issues.

At an institutional level, sometimes the argument is made that individual states cannot contribute to the preservation of global goods due to limited capacity. But this capacity is often underestimated. In addition, capacity can be considerably enhanced through international cooperation and multi-stakeholder arrangements. Frequently, though, it is lack of political will rather than scarce financial resources or know-how that poses problems – as can be seen, for instance, when the discourse of national sovereignty is mobilised to wilfully overlook internal as well as international responsibilities.

Nationalist leaderships often underscore this idea of a zero-sum game between global good and national interest in order to eschew, disdain or undermine multilateralism. This is not entirely new. In different periods of history, the discourse of national sovereignty has been invoked by leaders not only to reaffirm control over territory and policy space, but also to attack intergovernmental organisations. Nationalist and isolationist tendencies, for instance, contributed towards the failure of the United Nations’ predecessor, the League of Nations.

However, over the past few years, nationalism has made a remarkable comeback, including around environmental issues. Against this backdrop, we argue that these institutional and political challenges can be addressed through: a) effective regional and global cooperation and more inclusive models of environmental protection; and b) placing the discursive emphasis on the ways in which cooperation and multilateralism enhance, rather than detract from, national sovereignty.

Cooperation and more inclusive models of environmental protection
Environmental degradation and climate change effects are more strongly felt locally, but they are often produced globally. The roaring fires in the western coast of the United States, which scientists affirm are intensifying as a result of climate change, are a vivid reminder that climate change affects even the most developed of communities.

Increasingly serious environmental issues are appearing or intensifying everywhere – not just in, or because of, the Global South. European countries’ reliance on the fossil-fuel economy, the exporting by rich states of pollution-including electronic trash, the mining of metals such as gold, iron and aluminium, and environmental damage due to shale gas fracking in North America are only a few examples. To some extent, international regimes such as the Paris Agreement address unequal responsibilities and burdens, at least to the extent that parties deemed it sufficiently just to sign the agreement.

On the other hand, there are indeed differences in countries’ ability to tackle environmental issues. Many of these have arisen from, or are exacerbated by, decades and even centuries of accumulated pollution, contamination and illegal deforestation – all human activities with trans-boundary dynamics. Many states, especially smaller economies, face difficulties in mobilising enough resources to address certain climate-related problems, including extreme weather events, sea-level rise and soil erosion.

However, this is not the reality of all states, and generalisations across the Global South should be avoided. Often there is national capacity to assess risk, design responses and implement them, but the political will is lacking, for instance due to other priorities (such as electoral politics and geopolitical rivalries) or as a result of climate denial.

The case of Brazil provides a useful illustration that the failure to adequately protect the environment is not always an issue of national capacity. Although deforestation in the Amazon, Cerrado and Pantanal biomes (among others) is reaching new peaks due to illegal land invasions and arson, this has not always been the case.

Between 2004 and 2014, deforestation rates in the Amazon forest decreased by 82 per cent, even as productivity in agriculture and ranching increased by 21 per cent. This was achieved through a combined effort by local, state and national governments, as well as collaborative transnational cooperation between private sector actors and civil society, including networks of indigenous groups. Among the policies implemented were: enhanced monitoring through the use of satellite imagery and joint operations by government institutions to tackle environmental crime; enhanced law enforcement capacity; increased numbers of protected and conservation areas; and a soy moratorium.

Brazil also benefited from renewed efforts to promote international collaboration in the Amazon basin, albeit around specific technologies or particular themes. For instance, a bilateral agreement with China allowed Brazil to launch its first independent satellite used to monitor deforestation. Through the Amazon Fund (a mechanism created to raise donations to combat deforestation under the UN-negotiated REDD+ framework), Norway and Germany helped finance solutions to prevent and combat environmental crime in the Brazilian Amazon.

What Brazil is currently lacking, then, is leadership with a vision of how to promote sustainable and inclusive development and, especially, the well-being of indigenous peoples and traditional communities, rather than know-how or resources.

The case of Brazil may be extreme, but other transnational, climate-sensitive biomes may experience similar dynamics. In addition, inadequate or stalled international cooperation, including through regional arrangements, can in fact restrict the ability of national and subnational actors to tackle climate risks, curb environmental destruction and sustainably manage natural resources, even within their own territory.

Yet it is perfectly possible to develop effective models of transnational governance that preserve, and even enhance, national sovereignty. There are plenty of examples where international cooperation has either been essential to promote environmental protection and fight climate change, or holds considerable promise to do so.

In both the Pacific and the Caribbean, island states have joined forces to boost their resilience and capacity to respond to extreme weather events. And, even though the Great Green Wall initiative to combat desertification in the Sahel has encountered major hurdles, including water shortages, it is now more than halfway towards its goal of consolidating a corridor of planted trees across the entire African continent. In these places, the benefits accruing from cooperative adaptation can help ensure the continuity of key resources.

These examples show that the overlap between advancing national interests and protecting global goods can be maximised through effective cooperation along several modalities: bilateral, trilateral, regional, subregional and trans-regional. In practice, cooperation among subnational governments, such as state and city governments, has also flourished over the past decade – see, for instance, the C40 network of mayors.

However, more effort is needed to ensure that cooperation frameworks are institutionalised and receive adequate resources to allow further innovations to be developed. In addition, the inclusion of non-government actors, or a hybrid thereof, can also create a powerful pool of resources and solutions.

A prominent example of a multi-stakeholder model of environmental governance is the Forest Stewardship Council, which brings together NGOs, private-sector entities and environmental experts from both developing and developed countries to build global standards for sustainable forest management. Such examples are a reminder that a bolder, more inclusive design of trans-boundary governance is needed for climate-sensitive biomes.

Tempering the discourse of national sovereignty
However, building and consolidating frameworks and channels for cooperation is not enough. Progress on the political front must also be achieved. Even when channels already exist, they can remain under-utilised, be stalled or experience setbacks due to political interference. This is the case of the Amazon Treaty Cooperation Organization, which despite enormous potential exists mostly on paper due to a lack of political will and mutual trust between the eight Amazonian member states.

Recent distrust of international cooperation is associated with the rise of nationalist populist leaders. Although this discourse has long been mobilised by governments across the political spectrum, it is currently being instrumentalised in new, concerning ways. Even states that were founding members of the UN now ramp up this discourse to undermine international regimes, treaties and frameworks of which they too are signatories.

In the case of Brazil, this became extremely apparent in 2019, when forest fires broke new records in the Amazon, which some European heads of state deemed a “matter of international concern”. The backlash from the Brazilian government was swift. It reaffirmed Brazil’s sovereignty over the largest portion of Amazon forest and denounced foreign actors for supposedly coveting this territory and its natural wealth. This shows that the discourse of national sovereignty is not only mobilised to fulfil domestic political ambitions but can also be triggered by external positions that are viewed by policy elites as potentially interventionist and a threat to national interests.

Some of these tensions around the Amazon form a false dichotomy: the idea that international cooperation for the protection of global goods and the promotion of national interests are contradictory goals. This vision presumes that, in committing to multilateralism, a country’s leadership is giving up the ability to make its own decisions: as if by signing an agreement or embarking on a joint solution, states are giving up power. And it leads to the related claim that multilateralism and national sovereignty are at odds.

In reality, good multilateralism reinforces national sovereignty. A state is no less a state for being a part of the UN system. Even the ‘hardest’ interpretation of sovereignty, which links it closely to control of the territorial space, is enriched by multilateralism. For example, it is the UN that adjudicates proposals to extend maritime waters. Brazil’s maritime territory, for instance, was expanded by 940,000 square kilometres due to decisions taken by the UN Commission on the Limits of the Continental Shelf.

More broadly, the UN allows negotiated solutions for collective challenges that have become more diversified, complex and intertwined. From intensifying climate change to widening geopolitical cleavages to emerging issues around new technologies, global ‘public bads’ are proliferating and interacting with old problems, such as social inequality and unfair trade, in new and unexpected ways. This scenario demands collective solutions alongside national responses.

A more useful question, then, is: how can multilateralism be made more effective so as to boost the capacity of states, subnational actors, civil society and the private sector, allowing them to cooperate to better tackle domestic and international challenges? Asking how, rather than if, will lead to more constructive questions and responses.