The SDGs came out of and rely on multilateral enterprise. The efforts of more powerful nations to flex their muscles and sabotage the multilateral institutions pose a real threat to the SDGs 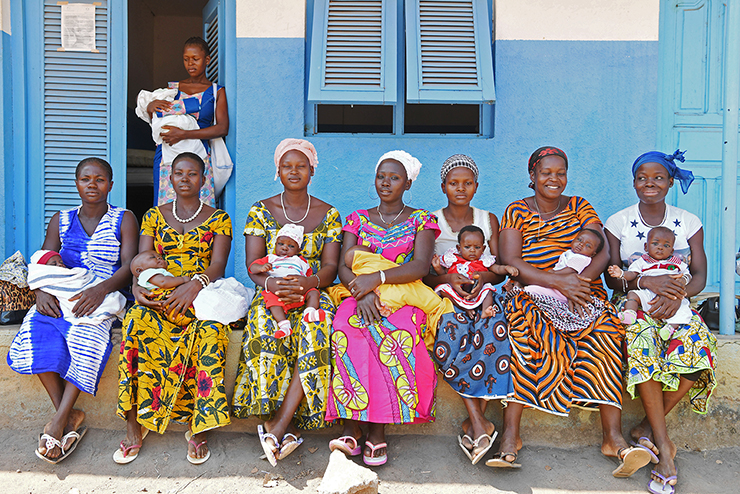 Mothers waiting with their newborn babies at a maternity health centre in the village of Nassian, Côte d’Ivoire. The US administration has cancelled its contribution to the UNFPA, which provides vital health services for mothers and children around the world.  © UNICEF/UN061403/Dejongh

The SDGs came out of and rely on multilateral enterprise. The efforts of more powerful nations to flex their muscles and sabotage the multilateral institutions pose a real threat to the SDGs

The network of multilateral institutions that oversees everything from states’ progress toward the Sustainable Development Goals (SDGs) to the daily distribution of humanitarian aid is under threat as never before. One of the clearest dangers is the unpredictable administration of US President Donald Trump, but that is not the only threat. Other countries are trying to weaken key international organisations and make them docile. There is also an internal risk: above all, that leaders of these multilateral organisations will compromise their mandates in the name of protecting them.

The risk Trump posed to the United Nations system was clear from the moment he set foot in the White House on 20 January 2017. Within days, media reports emerged about a draft executive order calling for crippling cuts to US funding for UN agencies and programmes. The proposed cuts were so severe that they would have made it difficult for the UN to continue numerous peacekeeping, humanitarian, vaccination and other essential programmes around the world that preserve countless lives on a daily basis.

That executive order never made it out the door, but the rejection of multilateralism has continued in other ways. Trump’s aggressive speech at the 2018 UN General Assembly praised sovereignty and independence over “global governance”. His administration has worked hard to gut funding to the UN and other international organisations in a way that’s scarcely precedented for the US, the UN’s biggest financial contributor. Congress has worked to undermine the administration’s more radical ideas, but Trump has not given up.

As under George W. Bush, the Trump administration has used a clause in a congressional funding bill to block the already appropriated US contribution to the UN Population Fund (UNFPA), which provides vital maternal and child health services around the globe.

But some of the Trump administration’s moves were beyond what one would expect from conservative Republicans. When Trump ended all US financial support to the UN Relief and Works Agency for Palestine Refugees in the Near East (UNRWA), it was a move that even raised eyebrows in Israel.

Trump’s hawkish national security adviser, John Bolton, is a hardline unilateralist who never hid his contempt for the UN and other international organisations. He was the architect of a campaign against the International Criminal Court (ICC) under George W. Bush that ultimately petered out. The Trump administration mounted a fresh attack, threatening retaliatory steps should the ICC pursue investigations of US or allied citizens. The administration made good on one of its threats by revoking ICC Chief Prosecutor Fatou Bensouda’s US visa, against the backdrop of her request to open an investigation in Afghanistan that might touch on US conduct.

But the Trump administration does not have a monopoly when it comes to attacking international organisations. Russia has worked hard to discredit the Organisation for the Prohibition of Chemical Weapons (OPCW), the guardian of the Chemical Weapons Convention based in The Hague, due to its investigations into chemical weapons in Syria and the poisoning of a former intelligence agent and his daughter in Salisbury, UK.

As the US withdraws from more UN agencies and haphazardly decreases its financial contributions, China is working hard to fill the vacuum by boosting its leverage and influence across the UN. It is already the UN’s number two financial contributor. China’s assertive approach to the UN brings risks. It has tried to sabotage the functioning of the UN’s human rights mechanisms in Geneva and New York and has used its influence within the UN Department of Economic and Social Affairs to curtail access to the UN premises for selected non-governmental organisations. Its prime target is human rights groups like the World Uyghur Congress, which highlights the persecution Uyghurs face at the hands of the Chinese government.

Some of the external threats were predictable. It is no surprise that in a world of sovereign states, powerful countries routinely try to strong-arm institutions to make them more compliant. But there is a risk of real damage that will not be easy to undo.

At the ICC, a panel of judges rejected Bensouda’s request to open a formal investigation in Afghanistan. They found that moving ahead would have limited prospects for success – most likely a nod in part to the Trump administration’s increasing attacks on the ICC.

Limiting the court to situations in which cooperation by states is guaranteed would all but neuter its mandate. The perception that the judges took this approach in the face of US pressure is damaging to the ICC’s credibility as an independent judicial institution.

Hobbling the ICC would have severe consequences. SDG 16 (strong institutions) includes the crucial objective of “access to justice for all”. ICC judges – and the court’s states parties – need to see the importance of overcoming problems with cooperation as part and parcel of delivering on the court’s mandate, not a reason to refrain from acting. There is real work to be done to strengthen the ICC. But moving away from those ambitions risks sending a message to the many victims of serious crimes that the international community is not willing to do its part to make access to justice more than an empty promise.

Fear of provoking Trump and risking precious US financing has in some ways paralysed UN Secretary-General António Guterres, who has made avoiding confrontations his top priority. Guterres has chosen the path of least resistance, avoiding public criticism of Member States, whether it is Russia, China, the US, Saudi Arabia or Syria. This approach is a deliberate strategy. One European ambassador told me Guterres considers the fact that he has remained on cordial terms with the Trump administration his single biggest success after two and a half years in office.

Placating Trump’s White House means avoiding explicit criticism even of its most egregious abuses. Even when confronted with the situation of thousands of migrant children being separated from their parents at the border as many of them sought to claim asylum, Guterres’ condemnation of the practice pointedly didn’t mention the Trump administration. That undermines the UN’s credibility and sends a message to minorities persecuted by their own governments that they are on their own. China’s Uyghurs say they feel abandoned by Secretary-General Guterres. While he has repeatedly praised Beijing’s controversial ‘Belt and Road Initiative’, he has refused to publicly condemn their policy of rounding up a million Turkic Muslims in Xinjiang and confining them to ‘political re-education’ camps.

If UN Member States are to succeed in meeting the SDGs, justice and human rights should be at the core of all of them, not just a single one about the rule of law. Accountability and the rule of law are essential for durable political and economic stability, but also to meet the daunting challenges of ending poverty, tackling climate change and addressing inequality within and between states. Serious human rights abuses underlie many of the world’s conflicts and crises. Those conflicts and crises are also a major impediment to sustainable development, and ending impunity for the abuses that fuel them is essential. Justice is not a can to be kicked down a distant road.

How can the world’s multilateral institutions survive the current threats? First, countries that believe in the UN and other international organisations should find ways to support their key programmes that protect rights and justice. When the US cut off funding to the UNFPA and UNRWA, European and other governments stepped in to provide vital financial support to help overcome funding shortfalls. Some countries have spoken out publicly in support of the ICC, but more voices are needed.

Second, leaders of international organisations should stand up to bullies and protect their groups’ mandates. It may be costly and provoke retaliation, but it is the best way to ensure that the organisations built to stop atrocities in the wake of two world wars can survive in the 21st century as they survived through the Cold War and genocide in Europe and Africa.

Institutions like the UN and the ICC may not be perfect, but they are worth preserving and improving. If the international community is serious about laying the groundwork for improving the lives of people around the world and achieving the SDGs, these institutions need to be healthy, effective and independent.