The rise in anti-immigration sentiment in parts of the world highlights the policy challenge: to ensure migration generates clear benefits for countries both sending and receiving migrants 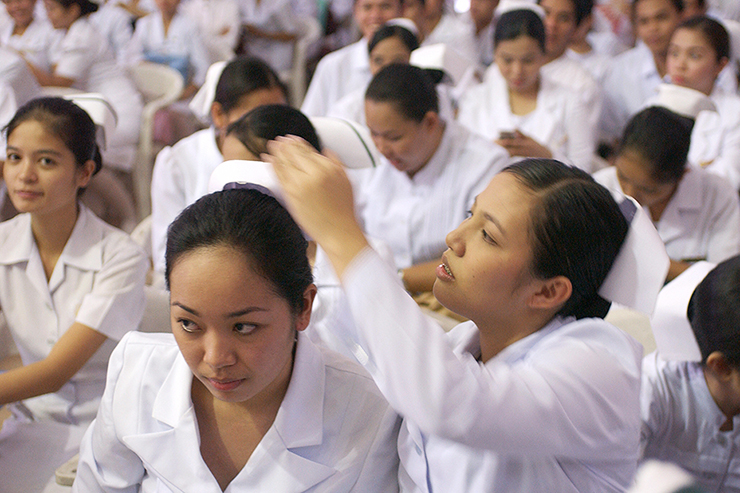 Graduate nurses in Manila, the Philippines, attend an oath-taking ceremony, having passed their final exams. Health services in many countries, including the NHS in the UK, recruit from the Philippines to fill skilled-labour shortages. © Romeo Gacad/AFP/Getty Images

The rise in anti-immigration sentiment in parts of the world highlights the policy challenge: to ensure migration generates clear benefits for countries both sending and receiving migrants

This is hardly surprising, as the total number of people residing outside their country of birth was 258 million in 2017, compared with about 173 million in 2000 (according to figures from the UN Department of Economic and Social Affairs).

At the same time, the difficult economic conjuncture of recent years, associated with mounting political discontent and increased migratory pressures due to conflicts around the world, has made migration the subject of heated debate in developed and developing countries alike.

This is understandable, as while migration is intertwined with economic growth and development, it is certainly not universally beneficial. Nor is it necessarily advantageous to any particular group of the people involved. Like development, migration inherently produces a degree of displacement and uncertainty. The question, then, is how to maximise its benefits.

Developed countries often see migration as a way to address labour shortages and fiscal challenges arising from an ageing population. Indeed, even though migration is not predominantly demand-driven, immigrants are important actors in the most dynamic sectors of the economy.

Recent comparative studies show that immigrants are over-represented in fast-growing occupations across countries of the Organisation for Economic Co-operation and Development (OECD). These studies also demonstrate that migrants are by no means a burden to public finances. However, migration can hardly provide the definitive solution to the problems posed by an ageing workforce.

Opposition to migration has increased in the last decade for two main reasons. The first is competition – real or imagined – for jobs in ever-shorter supply. Indeed, according to figures from the OECD, immigrants represented about a quarter of entries into the most strongly declining occupations in Europe (24 per cent) and the US (28 per cent), as well as taking up almost half of the low-skilled jobs.

A second factor explaining much of the anti-migration hostility has to do with concerns about the impact of immigration on urban neighbourhoods and the availability and quality of public services, especially in healthcare and education.

Effective integration
While not all these worries are founded, the array of hostile narratives indicates a growing need for policies that address the real challenges posed by migration. Such policies should promote effective integration, a greater understanding of the phenomenon, and social cohesion.

Effective integration can be pursued in several ways. For example, policymakers can ease competitive pressures on the labour market. This can be achieved by devising policies that select migrants with skills that are complementary to those of the existing population. Employment is the single most important determinant of migrants’ net fiscal contribution. We therefore need policies aimed at increasing employment rates, such as counselling and language-training programmes, particularly for South–North migration. We should see these as investments, rather than costs, for the long-term prosperity of both immigrant and native communities. Policymakers can promote understanding of migration and greater social cohesion through information campaigns and policies that target poverty and inequality among the native population.

In terms of the consequences on developing countries, scholarly and policy debates have tended to swing back and forth between pessimistic and optimistic views. Among the potential benefits from migration, remittances have been singled out as an effective instrument for poverty reduction. Their rapid increase in recent years, to reach three times the size of official development assistance, is therefore generally greeted with enthusiasm. But migrant-sending countries are also understandably worried about the loss of human capital from emigration, with its potential to hinder development. However, empirical research on the ‘brain drain’ has also emphasised that the prospect of moving abroad could provide incentives for educational improvement among the younger population, including those who remain.

Setting pessimism and optimism aside, these discussions often miss the complexity of different realities across the world. While the typical developing country might benefit from migration, there is little doubt that the developmental impact of migration is heterogenous and costs and benefits are difficult to determine. So, for instance, the brain drain can have a dramatic impact on countries that are particularly small or poor – such as Tonga, which is otherwise among the largest recipients of remittances as a share of gross domestic product (GDP) in the world.

Maximising benefits
How can developing countries maximise benefits from migration? The contribution that migration makes to national development comes through remittances, investment, entrepreneurship, trade, return migration, as well as the promotion of social change. Yet, favourable conditions are needed to set off a virtuous cycle.

First, a reduction in the cost of remittances is paramount. These costs, which remain stubbornly high, are borne by migrants and their families but also by the home country as a whole whenever remittances amount to a substantial share of GDP. Achieving the SDG target of reducing transfer costs below three per cent would greatly contribute to this objective.

Second, policymakers in the Global South can foster ‘brain circulation’ by promoting temporary or return-migration programmes for high-skilled migrants.

Third, an increase in governmental involvement with diaspora organisations could enhance the positive spillover effects of migration at a local level, especially in countries with large emigration rates.

Increasing the benefits from migration for both developed and developing countries ought to be high on the political agenda for decades to come. Appropriate national policies can be put in place to this effect. But equally important, if challenging, are the cooperative efforts that we need at an international level. Instead of being directed at merely reducing migration, such efforts should be geared toward channelling migration to the mutual advantage of sending and receiving countries. The Global Compact for Safe, Orderly and Regular Migration, signed on 18 December 2018, represents a first step toward this goal. Many more are awaited.