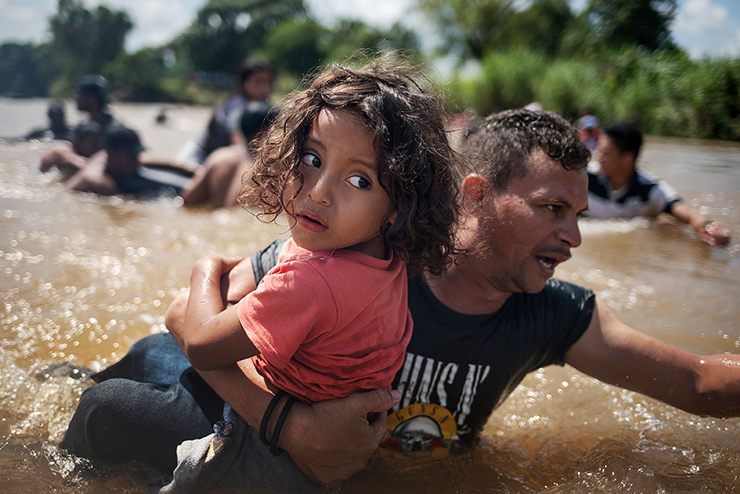 Luis Acosta holds 5-year-old Angel Jesus, both from Honduras, as a caravan of migrants from Central America en route to the United States crossed through the Suchiate River into Mexico from Guatemala in Ciudad Hidalgo, Mexico, October 29, 2018. Adrees Latif: “For the past nine days, I had been following a caravan of over 7,000 migrants from Central America who were making their way north after crossing the Guatemala-Mexico border. Instead of trying to attempt another gate crossing, the migrants had moved towards the Suchiate River to try to cross. Most of the migrants had already made it to the Mexican side of the river and were resting and drying their clothes along the bank. In the river, dozens of migrant men had locked arms to make a snake-like human cordon from the Guatemalan side to Mexico, so no-one would get swept by its powerful pull. With one camera in hand and a 35 mm lens, I broke into the cordon to photograph the last group of migrants crossing. A family that had made it to the middle of the river was handing their children to other men to help them reach the shore. As a man grabbed the girl in front of me, I followed him, photographing, as he carried her to safety. Moments later, the last set of migrants crossed, and the men who had locked hands in the cordon all swam towards Mexico and started celebrating that the caravan had made it. This photograph begs the question: why would a family leave home and not only risk their own lives but also the lives of their children by doing such extraordinary things? What propels someone to walk without knowing where they will next break bread or quench their thirst? It also reminds me of the poem “Home” by Warsan Shire that starts: “No one leaves home unless home is the mouth of a shark.” REUTERS/Adrees Latif/File photo SEARCH “LUIS ACOSTA” FOR THIS STORY. SEARCH “WIDER IMAGE” FOR ALL STORIES. TPX IMAGES OF THE DAY. – RC1862FA9120