Making trade work for everyone

Trade offers economic opportunities to consumers and producers, but also threatens to exacerbate deep inequalities. How can we ensure that trade generates wealth for all? 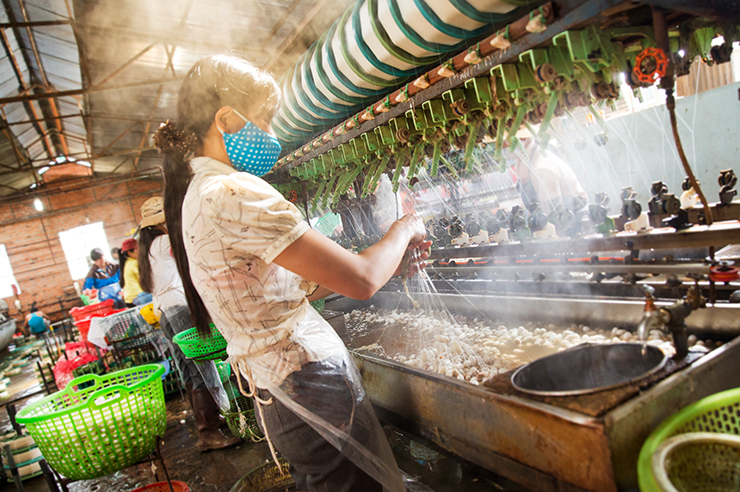 Producing silk in Vietnam. The country managed the rare achievement of high growth and poverty reduction with limited increases in inequality. © David Hannah

Making trade work for everyone

Trade offers economic opportunities to consumers and producers, but also threatens to exacerbate deep inequalities. How can we ensure that trade generates wealth for all?

Trade is a source of unprecedented wealth and arguably the biggest contributor to poverty reduction. Many poor countries have benefited from trade liberalisation. Mauritius, for example, used trade as an instrument for achieving the Millennium Development Goals (MDGs).

After implementing export-led reforms in 1996, GDP growth in the island nation reached an average of six per cent a year. Trade policies allowed it to develop value-added services and adapt to international competition. According to DFID, in Kenya the horticulture and agri-business sectors have created jobs for four and a half million people. Coffee exports have fuelled development in Rwanda.

Although the literature concerning the impact of trade liberalisation on inequality and poverty remains mixed, there is strong evidence that many people in developing countries have been made worse off because the rules are rigged against them.

The UN MDG trade targets reflected the global trade agenda of the time, and emphasised the liberalisation of market access. However, the trading landscape has changed since the MDGs began to be developed in 2000. This is reflected in the 2030 Agenda for Sustainable Development. But the dots between the targets on trade in the different Sustainable Development Goals (SDGs) still need to be connected.

Barriers to trade
Today, the main barriers to trade are in the areas of upgrading and integrating into global value chains. Tariffs have in fact been cut to such a degree that the major obstacles to commerce lie in non-tariff barriers, such as regulatory standards.

The new era of trade agreements go beyond tariffs. Both the Trans-Pacific Partnership (TPP) and the proposed Transatlantic Trade and Investment Partnership (TTIP) include language on issues such as labour rights, environmental laws and government procurement. However, they are characterised by secrecy: domination by powerful insiders, especially corporates, and a lack of public consultation.

There is evidence to suggest that TTIP could negatively impact developing countries and directly undermine some SDGs. For example, SDG target 17.11 commits governments to “significantly increase the exports of developing countries, in particular with a view to doubling the least developed countries’ share of global exports by 2020”.

Although there is no consensus about the impact of TTIP on developing countries’ trade, these nations could experience significant negative effects. It has been estimated that some sub-Saharan African countries could lose up to 7.4 per cent of per capita income.1 Countries like Niger and Malawi could see drops in exports to the US of between 3 and 12 per cent.2 The combined loss to the garment sectors of Bangladesh and Pakistan could amount to $42.6 million.3

The greatest area of controversy in both TPP and TTIP is the investor–state dispute mechanism. Although the original intent was to prevent host governments from expropriating foreign investments,  the mechanism gives corporates immense power. Companies can challenge governments through international arbitration panels if they believe that government policies have caused a loss of profits, thereby undermining sovereignty.

The most controversial example has been the Philip Morris challenge to Australia’s plain-packaging laws for cigarettes, which was brought under a similar mechanism contained in an Australia–Hong Kong investment agreement.
Some argue that TPP was an opportunity to advance human rights. It included moves to strengthen labour standards in countries like Vietnam, where the communist government committed to change its laws to allow workers to unionise freely and strike for better wages and working conditions. Non-compliance would be penalised by the restoration of tariffs by the US.

Sharing the benefits
Between 1981 and 2010, China pulled 680 million people out of poverty – partly by becoming the world’s manufacturing hub – but also saw a significant rise in inequality. Vietnam’s largely export-led growth in agriculture and manufacturing led to high rates of growth and poverty reduction, with limited increases in inequality.

Recently, trade deals have been associated with inequality in developed countries as well, most notably in the US, causing political tension. Yet it is worth bearing in mind that such deals are only one contributing factor, and arguably one with less impact than developments in technology and automation.

The benefits of trade need to be equally shared: losers need to be compensated and not ignored. Countries need to develop social safety nets to minimise the negative effects. This requires investment in education, training policies and unemployment benefits. Vietnam, for instance, has invested heavily in education. Spending on education there is about 6.8 per cent of GDP, which is two percentage points more than the average for low and middle-income countries.4 This has created a workforce that is not only young but also skilled.

In Brazil, an extensive cash transfer programme helped to redistribute income and bring down inequality. Inequality in China remains an issue despite a series of government transfers, such as a subsidy paid to urban dwellers and the introduction of a rural pension. The safety nets of the Trade Adjustment Assistance programme in the US and the European Globalisation Adjustment Fund are tiny and relatively ineffective.

Despite significant liberalisation efforts, the failure of some developing nations, notably least developed countries, to  diversify production and exports has led to low growth and persistent poverty. Although countries need to capture opportunities arising from increased access to markets in developed countries, there are other areas of untapped potential.

Increased intra-regional trade in Africa, currently at only 18 per cent according to a World Economic Forum on Africa 2016 report, could act as a global shock absorber. However, the market remains highly fragmented with a variety of non-tariff barriers that limit the movement of goods, capital and services.

Trade deals need to leave poor countries with sufficient policy space to pursue their own development objectives. Rapid and reciprocal liberalisation can, and has, harmed poor countries by exposing their industries to competition before they are ready to take on more efficient producers.

Preferential access is still essential to enter developed-country markets. Small farmers are being pushed out of their livelihoods, unable to compete with cheap imports, leading to issues around food sovereignty. For example, chicken imports to Ghana were expected to rise to over $198 million by the end of 2016, leading, essentially, to the collapse of the local industry. The international demand for cheap clothes has fostered sweatshops in countries like Bangladesh and Cambodia.

Trade and trade policy can also greatly affect the risk of conflict. There is strong support for a hypothesis known as the ‘rapacity effect’. This shows that once valuable resources are available, people will fight over them. According to a 2016 report by the World Bank, a 10 per cent increase in the prices of exported commodities raises the risk of conflict by between 2.2 and 2.5 per cent.

Globalisation rules are now evolving to make it more difficult for nations to imitate the success of countries like Mauritius, South Korea, Taiwan, India and China. Trade policy needs to deliver more benefits to working people and should spread economic opportunity as broadly as possible, both in the developed and developing world.

Above all, it must be more inclusive and should not exacerbate poverty and inequality.

1. EM-DAT: The OFDA/CRED International Felbermayr, G., B. Heid and S. Lehwah, 2013, Transatlantic Trade and Investment Partnership: Who benefits from a free trade deal?
2. Trade Justice Movement, 2015, TTIPing Away the Ladder: How the EU-US trade deal could undermine the Sustainable Development Goals, www.tjm.org.uk/documents/TTIPing_Away_the_Ladder.pdf
3. Rollo, J. et al., 2013, Potential effects of the proposed transatlantic trade and investment partnership on selected developing countries, Centre for the Analysis of Regional Integration at Sussex (CARIS), University of Sussex. Brighton, UK
4. Melamed, C., 2011, Inequality – Why it matters and what can be done, ActionAid, www.actionaid.org/sites/files/actionaid/inequality_why_it_matters_and_what_can_be_done.pdf