Making the case for human rights

Without a step change in action to protect human rights, we will not achieve the SDGs 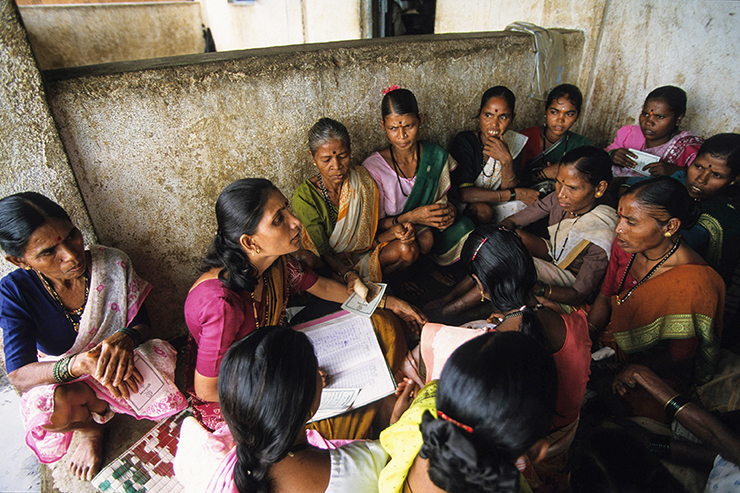 Dalit women in India – the untouchable caste – meet a representative from a microfinance community bank. Although untouchability was abolished by the Indian constitution and caste-based discrimination prohibited, Dalits still suffer social and economic exclusion, as well as widespread violence. © Joerg Boethling/Alamy Stock Photo

Making the case for human rights

Without a step change in action to protect human rights, we will not achieve the SDGs

The Sustainable Development Goals (SDGs) came into force on New Year’s Day in 2016 in a moment of shared global hope. This was the world realising its need to fully address inequality, and to tackle the economic and social turmoil that both threaten our planet and undermine political and social harmony within and among Member States.

The 2030 Agenda sets an ambitious but attainable objective: a model of more equitable and sustainable development that puts people at its centre and is explicitly grounded in all human rights – including the right to development. It seeks to achieve durable and truly inclusive development for all.

The commitment to ‘leave no one behind’ demands that we eliminate all the persistent, biting and systemic discrimination that leads to unequal, unsustainable development. This includes structural inequalities between social groups, which frequently flare into conflict and force people to flee their homes.

The 2030 Agenda is a commitment to achieve greater international cooperation and a more equitable international order. But above all it is a promise to people previously locked out of development: the marginalised, disempowered and excluded communities; the millions of women facing multiple forms of discrimination; racial, religious and caste minorities; indigenous peoples; migrants; people with disabilities; and the poor.

It is a detailed plan to end poverty, to secure justice and the rule of law, to enable the broadest possible public participation in decision-making, and to secure access to essential economic and social rights: food, health, education, water, housing, sanitation and others.

Its goals, targets and indicators are a roadmap for realising the human rights vision of freedom from fear and want.Some Member States have already made tremendous progress towards this vision. According to The SDG Report 2018, extreme poverty has fallen to below 11 per cent of the world population. The proportion of families living on less than $1.90 per person per day has fallen from almost 27 per cent in 2000 to 9.2 per cent in 2017, with much of this progress achieved in Asia. Since 2010, the proportion of children in school has risen from 63 per cent to 70 per cent. Maternal mortality in sub-Saharan Africa has fallen by 37 per cent since the year 2000, and mortality in children under five years old has been halved.

And, according to the United Nations Children’s Fund, South Asia has seen the largest decline in child marriage worldwide in the last decade: a girl’s risk of marrying before her 18th birthday has dropped by more than a third. And yet, overall, we are not on track for 2030.

Tackling inequalities
Many countries are still very far from achieving gender equality, which is both a goal and a driver of sustainable development. Almost always, it is women and girls who are furthest behind. Women’s inequality remains powerfully entrenched in terms of political empowerment, economic opportunities, physical safety, equal pay and individual freedom of choice.

Conflicts are destroying people’s lives, hopes and ability to earn a decent livelihood in the places they were born. Every day, 44,400 people are forced to flee their homes because of conflict or persecution. Climate change is generating overwhelming environmental disasters, which devastate basic infrastructure and exacerbate tensions and conflicts.

After many years in which under-nourishment and food insecurity have declined, the number of people counted as undernourished rose from 777 million in 2015 to 815 million in 2016. This is mainly due to conflicts, as well as drought and other climate-linked disasters. That equates to 11 per cent of humanity: one out of every nine women, men and children do not have sufficient food.

Young people are three times more likely to be unemployed than other adults. Although more children are in school, less than half of all children and adolescents worldwide meet minimum standards in reading and maths. Around the world, 93 per cent of children live in environments where air pollution exceeds guidelines.

And economic inequalities continue to grow. More wealth is being produced than ever before, but is not being equitably shared. As the International Labour Organization has pointed out, the labour share of GDP has been falling for 25 years. Oxfam has asserted that 82 per cent of all the wealth generated in 2016 went to the richest one per cent of the global population, while the poorest half of humanity saw no change in their income.

Inequalities affect all countries. Even in prosperous nations, people feel excluded from the benefits of development and deprived of economic and social rights – leading to alienation, unrest and sometimes violence. Inequalities undermine peace, security, social progress and economic and political stability. They fuel grievances, hatred, extremism and conflicts. They threaten our opportunity to achieve sustainable, inclusive development.

If Member States are to deliver the 2030 Agenda, they must do more to tackle inequalities of resources, income, power and access to justice – and with respect to the basic conditions for human dignity. When they agreed to leave no one behind, this was their profound commitment.

Accelerating change
With just 12 years left, we need to step up the pace of change. A ‘business as usual’ approach is insufficient. We need immediate and accelerated action, including stronger partnerships between stakeholders at all levels.

Sometimes it takes great courage to be a political leader. Embarking on the necessary economic, social and political reforms may involve risking political capital, overturning entrenched interests by narrow elites and upsetting dominant groups. But ultimately it is at the national level where change must take place.

The ethos of change is equally important. The human rights approach leads to development that is more powerful, sustainable and effective, because it promotes empowerment, inclusiveness and equal opportunities.

Inequality is a human rights issue. And food, water, healthcare, education, housing and access to justice are not just commodities, for sale to the few – they are rights, to which all human beings are entitled.

The 2030 Agenda is a vital opportunity to realise the promise of the Universal Declaration of Human Rights and the Declaration on the Right to Development. It explicitly recognises that respect for all human rights – civil, political, economic, social and cultural – is central to the work of constructing more equal, resilient and sustainable societies.

Human rights and sustainable development have a mutually reinforcing relationship. This is evident in many of the goals, especially SDG 10 on reduced inequalities, and SDG 16 on peace, justice and strong institutions. But it is also the case in SDG 4 on quality education, SDG 8 on decent work and economic growth, SDG 13 on climate action, and SDG 17 on partnerships. The work of the UN Human Rights Office is inseparable from this agenda. A recent analysis of the Human Rights Council (HRC) found that virtually all its activities and outcomes could be understood as contributing to the overall aim of leaving no one behind. The work of the human rights treaty bodies and special procedures of the HRC are no less important. They constantly draw attention to human rights violations and abuses, and make specific calls for change in line with human rights standards.

As we move forward, I hope to see a greater sense of urgency, with renewed energy and commitment among all partners. Delivering the 2030 Agenda means all nations can thrive and we can promote the full potential of every human being – ensuring that we truly leave no one behind.